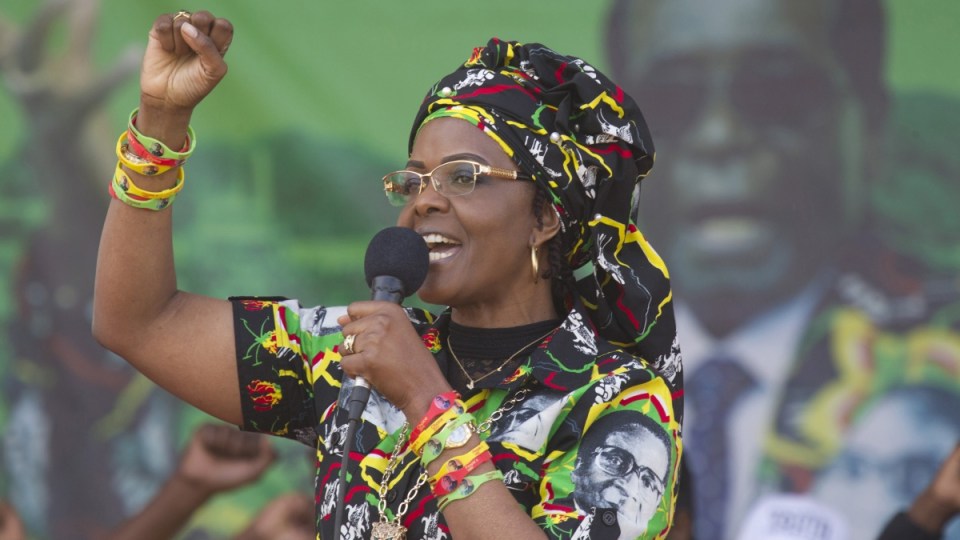 Grace Mugabe, who has survived a number of scandals, was poised to become one of the country's two vice presidents. Photo: AP

Zimbabwe’s “ruthless” First Lady Grace Mugabe – who was manoeuvring to become her husband’s successor – is thought to be under house arrest in the capital Harare after her ambitions triggered a military coup.

She and her 93-year-old husband, President Robert Mugabe, were placed under house arrest by the Zimbabwe army on Thursday.

A smiling Mr Mugabe was pictured shaking hands with Zimbabwe’s military chief Friday morning (AEST), throwing confusion over predictions that his rule had come to an end.

The official Herald newspaper carried no reports of the outcome of the meeting, leaving Zimbabwe’s 13 million people in the dark as to what was happening as night fell.

Mugabe is insisting he remains Zimbabwe’s only legitimate ruler and is refusing to quit, but pressure was mounting on the former guerilla to accept offers of a graceful exit.

Over the years Mrs Mugabe, 52, has risen in power and become a key frontrunner to claim the presidency as her husband’s successor.

One week ago, vice-president Emmerson Mnangagwa – who is popular with the military as an alternative leader – was dismissed from office.

His sudden removal was viewed by the army as a way for the President to ensure Mrs Mugabe could step up.

The military maintains the situation in Zimbabwe is not a coup but a “correction” against “criminal elements” that surrounded Mr Mugabe.

Political Sciences Professor Henning Melber of the University of Pretoria described Mrs Mugabe, who has earned the nickname ‘Gucci Grace’, as “power hungry, ruthless and greedy”.

The First Lady was originally a typist for Mr Mugabe, 40 years her senior, and their relationship emerged from an affair while the President’s former wife lay on her death bed.

She has been accused of whipping a model in a South African hotel suite with an electric extension cable and appeared in court last month to sue a diamond dealer for not supplying her with a 100-carat diamond she alleged to have paid for.

“She (Grace) has been very unpopular and disliked by the ordinary people, is not a born and bred Zimbabwean (but from South Africa) and as a ‘woman from the outside’ is not acceptable for the African ‘old men’ patriarchal culture,” Professor Melber told The New Daily.

“Her lifestyle was a provocation for the people living in abject poverty. The way she was splashing money on shopping trips was a disgrace.

“Her departure from Zimbabwe will not provoke any popular protest.”

Roger Southall, Emeritus professor in sociology and Zimbabwean expert at the University of the Witwatersrand, said Grace was the “absolute trigger” for the apparent military coup.

He said this was due not only to her character but also some of her supporters who he described as “a shady lot”.

“I don’t think there is any doubt that it was her expected elevation in power to vice-presidency that brought about the coup,” he told The New Daily from South Africa.

“She has proved herself as extremely unpopular because of her displace of wealth and arrogance. She has been very crude and attacking.

“Her future is extremely uncertain. I can’t imagine she will be allowed back in Zimbabwe. I think she’s out of the race completely now.”

Professor Southall said he believed Mrs Mugabe would always have a difficult relationship with the military had she risen to presidency.

“It will be interesting to see whether President Mugabe stands down or stays on under house arrest.”

“Either by immediate resignation or by handing over the power at the ZANU congress in December to [ousted vice-president] Mnangagwa,” he said.

“People are also welcoming to a large part the forced retirement of Robert Mugabe who during his 37 years in power brought misery to the ordinary people – many left the country in desperation.

“While the expectations are not too high, the general feeling is that it cannot get worse, only better.”