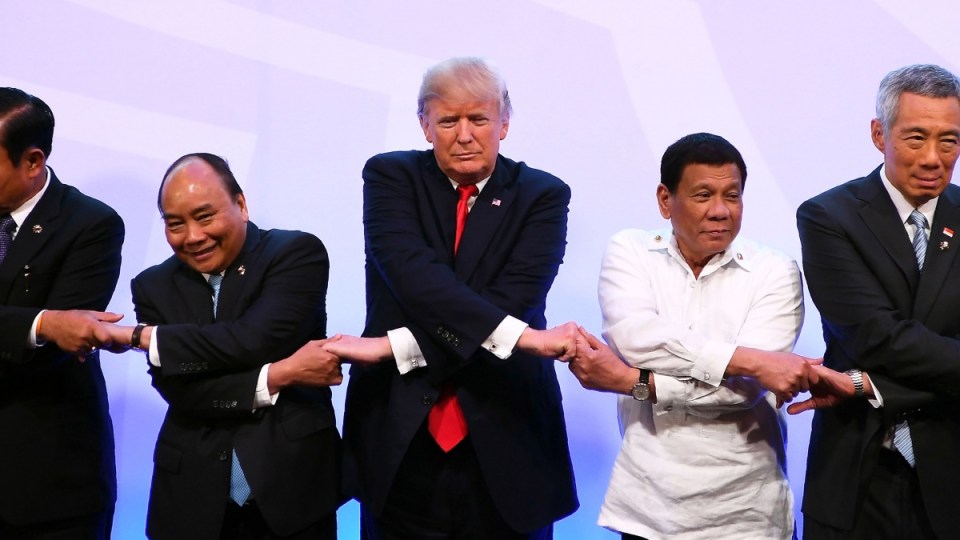 Handshakes are clearly not the US President's strong suit. Photo: AP

Donald Trump shared a private meeting with Malcolm Turnbull on the sidelines of the APEC summit overnight as the world puzzled over the US President’s “most awkward handshake” to date.

Both leaders have been in the Philippines capital since Sunday for the East Asia summit which wraps up on Thursday.

Mr Turnbull and Mr Trump met without officials in the room to discuss trade and regional security.

But it was an earlier interaction between Mr Trump and his fellow world leaders that had the world’s media and social media bewildered.

A clearly confused Mr Trump struggled to come to terms with the traditional cross-armed group handshake at the opening of the summit, much to the amusement of onlookers.

Standing between Philippine President Rodrigo Duterte and Vietnam Prime Minister Nguyễn Xuân Phúc, the US President was briefly beaten by the concept of the handshake and laughed and grimaced until he got it right.

Mr Trump has been known to engage in interesting handshakes with world leaders he’s met since taking office.

His latest effort was jumped on by observers.

good luck to whoever has three weeks to get this regional production of Mamma Mia! into shape pic.twitter.com/eCZ81VxbMi

It’s unclear whether Mr Turnbull, at the evening meeting with Mr Trump, raised the prospects of speeding up the US refugee resettlement deal.

The stand off with hundreds of refugees at the mothballed Manus Island detention centre continues.

Mr Trump reluctantly agreed to resettle up to 1250 refugees but only 54 have gone to America so far.

New Zealand’s Prime Minister Jacinda Ardern had been hoping for a second conversation with Mr Turnbull, following her trip to Sydney a week ago, to express her “grave concerns” about the ongoing Manus Island saga and reiterate her country’s offer to take 150 refugees.

On Tuesday, Mr Turnbull is expected to meet with Indian Prime Minister Narendra Modi and Chinese Premier Li Keqiang on the sidelines of the summit.

Mr Turnbull will also get together with leaders from the 15 other countries negotiating a China-led Regional Comprehensive Economic Partnership free trade pact for a first time meeting.

The deal includes the ten Association of Southeast Asian Nation countries as well as India, South Korea, Japan and Australia and NZ.

The prime minister is due home on Wednesday morning in time for the gay marriage postal survey result announcement.