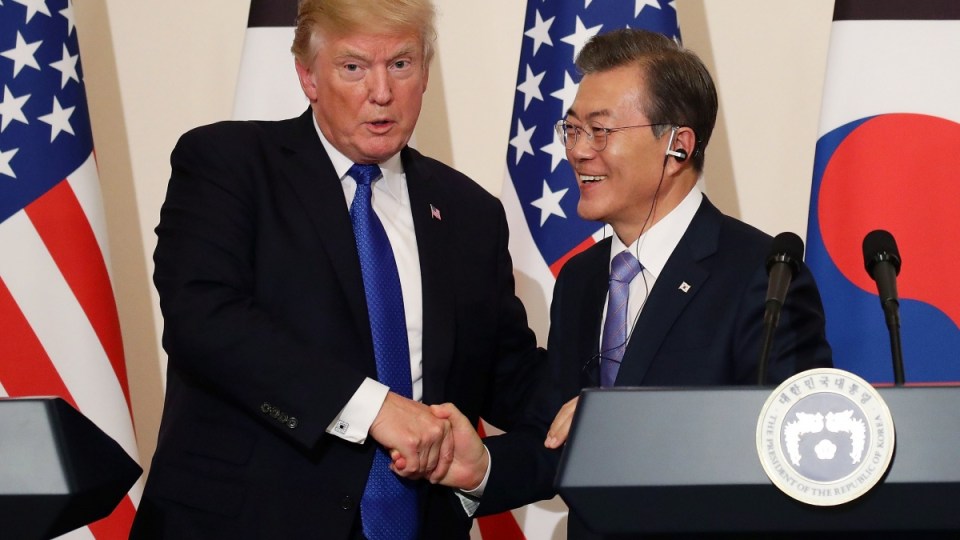 “It makes sense for North Korea to come to the table and make a deal that is good for the people of North Korea and for the world,” he told a media conference alongside South Korean President Moon Jae-in.

Mr Trump said he’s seen “a lot of progress” in dealing with North Korea although he stopped short of saying whether he wanted direct diplomatic talks.

He underscored the United States’ military options, but said he hoped “to God we never have to use” the arsenal.

While it was a softer tone than used by the President in the past, he still accused Kim of “threatening millions and millions of lives, so needlessly”.

And while Mr Trump did not revert to his usual aggressive stance toward Pyongyang, his visit to the Korean peninsular is accompanied by a major show of force in the Pacific.

Three US aircraft carriers, along with guided-missile destroyers and submarines, will conduct battle exercises in the region’s waters over the coming days.

The overt show of power by the US is expected to be seen by North Korea as a direct provocation.

The exercises  – involving the aircraft carriers USS Nimitz, the USS Ronald Reagan and the USS Theodore Roosevelt – follow joint drills by the US, Australian and South Korean navies intended to simulate the interception of shipments of nuclear material meant for North Korea, CNN reported.

Mr Trump’s main mission on his first lengthy trip to Asia is to enlist the region’s main players, including China and Russia, to cut off Pyongyang’s economic lifeblood.

Mr Moon, who wants to solidify the friendship, said he hoped the President’s visit would be a moment of inflection in the stand-off and said the two leaders had “agreed to resolve the North Korea nuclear issue in peaceful manner” to”bring permanent peace”.

Much as he did in Japan, Mr Trump indicated he would place the interlocking issues of security and trade at the heart of his visit.

He praised South Korea for significant purchases of American military equipment and urged the two nations to have more equitable trade relationship.

Mr Trump also pushed his economic agenda, saying that the current US-Korea trade agreement was “not successful and not very good for the United States”.

He is expected to skip the customary trip to the demilitarised zone separating north and south – a pilgrimage made by every US president except one since Ronald Reagan made as a demonstration of solidarity with the South.