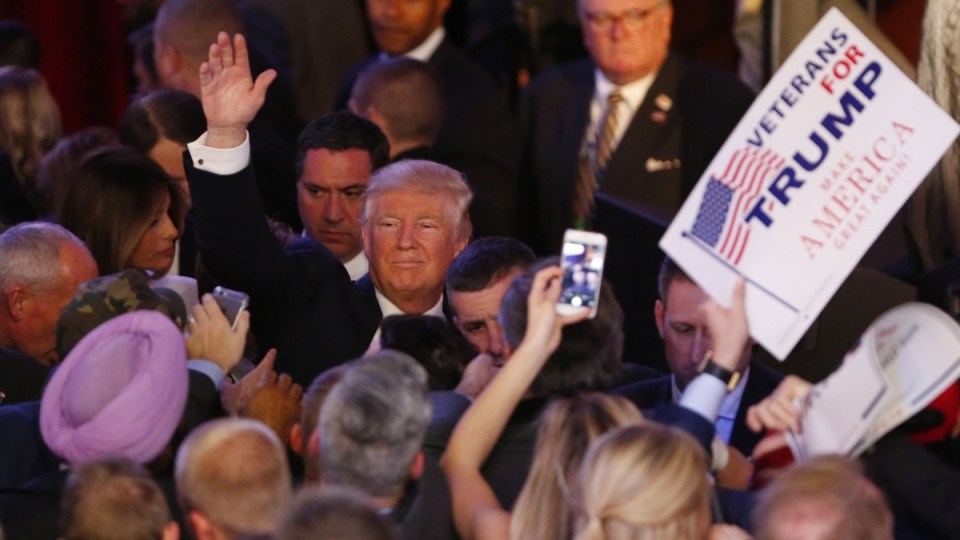 On November 9 last year, just hours after midnight, Donald Trump walked onto a stage at New York’s midtown Hilton Hotel to claim the unlikeliest of victories in the US presidential election.

“To all Republicans and Democrats and independents across this nation,” Mr Trump told his cheering supporters. “I say it is time for us to come together as one united people. It’s time.”

They were fine words. Just what the country needed to hear after a bitter and divisive campaign.

But 12 months on, Mr Trump’s done pretty much the opposite of what he promised.

He has played almost exclusively to his base, attacked or mocked perceived enemies, been clumsy, even inept when conducting foreign relations and proven repeatedly he’s incapable of negotiating in good faith. (He is a property developer, after all.)

As a result, America is riven with deep divisions that threaten to tear the place apart.

And Mr Trump is the most unpopular president in modern US political history.

On and on it goes. If Mr Trump was the CEO of a Fortune 500 company and had blundered as many times, shareholders would have risen up by now and he’d probably be gone.

As it is, American voters are registering never-before-seen opinion poll numbers that suggest Mr Trump and his Republican partners are manifestly unpopular with all but their core supporters.

A new Washington Post-ABC News survey published this week showed that fewer than four in 10 Americans – 37 per cent – approve of the job Mr Trump is doing.

That is the lowest approval rating of any president at this point in their term over seven decades of polling. That’s right, seven decades.

Particularly worrying for the Republicans is that Mr Trump’s poor performance is putting at risk their majorities in the US Senate and Congress which will be tested at next year’s mid-term elections.

The same Post-ABC survey found that 51 per cent of registered voters say that if those elections were held today, they would vote for or lean toward the Democratic candidate, while just 40 per cent say they would choose the Republican.

It’s the biggest spread in a Post-ABC survey since October 2006, just weeks before the Democrats won back control of the House and Senate amid deep dissatisfaction with then-president George W. Bush and the Iraq War, the paper noted.

But you don’t need polls to know Mr Trump is on the nose.

I first lived here in the 1980’s when Ronald Reagan was president and again in the nineties under Bill Clinton.

Even though both men had their travails – Reagan’s powers were much diminished in his second term and Clinton, of course, was long mired in the Lewinsky scandal – there was an ongoing respect for the office of the president.

That’s gone now, in part because of the effects of the social media Mr Trump loves so much, but largely because there’s little about him that’s presidential.

As a result, strangers apologise for him and long-time Washington watchers offer odds on when he might fall.

No wonder there are signs that the marriage of convenience between Mr Mr Trump and the Republican Party is crumbling, at least at the edges.

Dissension in the ranks

Dissenters now include outgoing senators Bob Corker, who recently said the President was running the White House like it’s a reality TV show, and Jeff Flake, who believes “the President’s behaviour is not normal”. John McCain is hardly a fan either.

Mr Trump and the Republicans desperately need a win on tax reform, but there are no guarantees they’ll get it. Without it they’ll be ridiculed as having squandered an entire year of policy-making.

The President has a couple of things going for him though: his base is holding firm and his key media partners are sticking by him.

Crucial here is, you guessed it, Rupert Murdoch. Around the time of the first arrests in the FBI Russia probe last week, Mr Murdoch’s main media properties swung behind Mr Trump in almost unseemly ways.

Fox News spent as much time trying to dredge up Hillary Clinton ‘dirt’ as it did reporting the FBI arrests (as if it mattered); The Wall Street Journal published an editorial calling for special counsel Robert Mueller’s resignation on the flimsiest of grounds; and The New York Post trotted out a couple of columnists who did likewise.

They were the first signs of desperate conservatives trying to create an alternative narrative if the Russia probe goes against their man.

Another plus for Mr Trump is that the economy continues to perform well with record Wall Street gains and low unemployment. He unashamedly takes credit for both.

Will there be a turnaround?

Can Mr Trump turn things around? History would suggest he can. Throughout last year’s election campaign he looked beaten until just hours before that appearance on the New York stage. All the negative opinion polls in the lead-up to the vote weren’t worth a jot.

His fate would appear to rest with Mr Mueller, the man who replaced former FBI Director James Comey and is now running the Russia probe.

The suspicion is that there is clearly much more to come. That spells very bad news for Mr Trump.

Which might explain why there have been rumblings in recent weeks that the notoriously impatient and fickle president, emboldened by his media allies, might simply sack the respected investigator and paint the whole episode as liberal America refusing to accept his victory. Cue full-on constitutional crisis.

Ultimately, Mr Trump’s victory last November was a challenge to Washington’s status quo. Americans wanted him to shake things up.

But 12 months on, there’s been too much noise and too little progress or achievement. He hasn’t drained the swamp, he’s flooded it.

And while it might be unconventional, even refreshing occasionally to read the unvarnished views of a president every morning at 7 o’clock, it can also be alarming and wearying. The country often seems exhausted by lunchtime.

Recently the Tony award-winning actress Laura Benanti – who has developed a first-rate impression of Melania Trump – was asked by Stephen Colbert whether she empathised with the First Lady, who’s long been suspected of being unhappy in both her marriage and her new role.

“We are all Melania Trump,” Benanti said with surprising insight. “We are all reluctantly married to Donald Trump. I feel like America is Melania.”

Anyone who has seen the First Lady grimly trailing her husband around Washington and beyond, would be troubled by the assessment.

It remains to be seen whether both parties can yet make the arrangement work. At this point though it looks to be a most unhappy union.