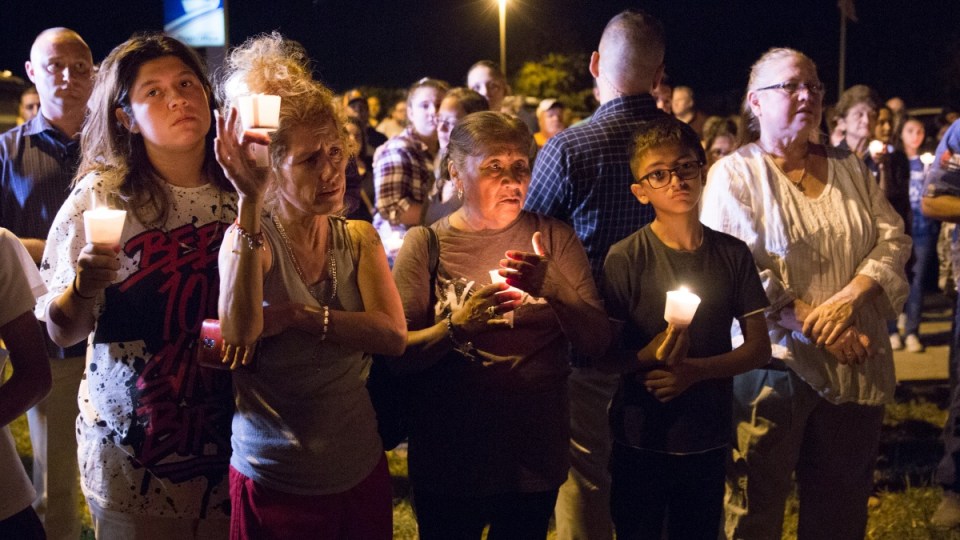 Townsfolk hold a candlelight vigil outside the First Baptist Church in Sunderland Springswhere 26 people were shot be a lone gunman. Photo:Getty

The worst shooting in Texas history, which claimed 26 victims including eight from the same family, appears to have been caused by a domestic dispute.

“This was not racially motivated, it wasn’t over religious beliefs, it was a domestic situation going on,” Mr Martin added.

Authorities said that while the killer’s former mother-in-law wasn’t at church yesterday, his ex-wife’s grandmother was and she died in the shooting. The victims’ ages ranged from 18 months to 77 years.

Meanwhile, as police identified the killer as a 26-year-old ex-Air Force member, President Donald Trump weighed in from Tokyo, saying that despite the ferocity of the attack it was not “a guns situation”.

“We have a lot of mental health problems in our country, as do other countries. But this isn’t a guns situation,” Mr Trump said. “Fortunately somebody else had a gun that was shooting in the opposite direction.”

Authorities identified the killer as Devin Patrick Kelley, who was kicked out of the Air Force in 2014 after serving time in a military prison for assaulting his wife and child two years earlier.

“He assaulted his stepson severely enough that he fractured his skull, and he also assaulted his wife,” said Don Christensen, a retired colonel who was the chief prosecutor for the Air Force. “He pled to intentionally doing it.”

He was sentenced in November of that year to 12 months’ confinement and reduction to the lowest possible rank. After his confinement, he was discharged from the military with a bad conduct discharge.

The case marked a long downward slide that included divorce and being charged with animal cruelty, The New York Times reported.

Meanwhile, the US Air Force has said it may have failed to provide information that could have prevented Kelley from legally purchasing firearms.

The Air Force said, according to initial accounts, details about Kelley’s criminal history were not provided to a key US law enforcement database known as the National Criminal Information Centre.

Kelley walked into the First Baptist Church on Sunday morning and started firing at the pews using an assault-style rifle.

Eight members of the same extended family were among the 26 victims who died when Kelley opened fire on them in the tiny Texas community of Sunderland Springs, near San Antonio.

The eight – including three children and their mother who was pregnant with her sixth child – spanned three generations of the family of associate pastor Bryan Halcombe who was shot as he walked to the pulpit to preach.

He was filling in for regular pastor Frank Pomeroy who wasn’t in the church yesterday. But his 14-year-old daughter, Annabelle, was and died at the scene.

Twenty other parishioners were injured, ten of them critically.

Authorities searching for a motive for the horrific killing believe Kelley’s former in-laws had attended the church from time to time.

But they didn’t attend this Sunday until after learning of the shooting which left pretty much the entire congregation of about 50 either dead or wounded.

“Nearly everyone [inside] had some type of injury,” Wilson County Sherriff, JoeTackitt said. “I knew several people in there. It hasn’t really hit yet, but it will.”

It was “a horrific sight” inside, he said, adding: “You don’t expect to walk into church and find mauled bodies.”

Between 12 and 14 of the people killed or injured in the attack were children, he said.

With his deadly work done, Kelley exited the church only to be met by a barefoot local – he’s not yet been identified further – who opened fire on him, hitting him at least twice.

Kelley, wearing all black, a protective vest and a mask, ran to his 4WD and took off at high speed.

The armed local flagged down the passing truck of Johnnie Langendorff, who in the hours since has become a kind of national hero here, freely giving interviews across all media.

“He briefed me quickly on what had just happened and said he had to get him,” Langendorff said later. “So that’s what I did.”

It was “act now, ask questions later”, he said. The pair gave chase for more than ten minutes, hitting speeds of up to 150 km/h before Kelley’s vehicle ran off the road.

“I was on the phone with dispatch the entire time,” Langendorff said. “I gave them the direction we were going, on what road and everything, and that the vehicle was in sight and that I was getting closer and closer to him.”

When police arrived and approached Kelley’s vehicle they found him dead inside, apparently from a self-inflicted gunshot wound.

They say Kelley also used his mobile phone to tell his father that he had been shot and didn’t think he would survive.

Texas Governor Greg Abbott said Kelley, recently sacked from his job as a security guard, had been denied a gun permit when he last applied.

“By all of the facts that we seem to know, he was not supposed to have access to a gun, so how did this happen?” Abbott said in an interview on CNN. “We are in search of answers to these questions.”

Texas allows “concealed carry” of guns and has one of the highest gun ownership rates in the United States.

Trump’s message today echoed his sentiment after the Las Vegas mass shooting in which 58 people died at the hand of a lone, white gunman. Then, as now, he blamed mental health rather than the armory of weapons the shooter had in his possession.

It was in stark contrast to his outburst following last week’s New York “terror” attack where he called for a crackdown on immigration and threatened to use Guantonomo Bay after it emerged the accused was an Uzbek who’d entered the US on a green card diversity program.