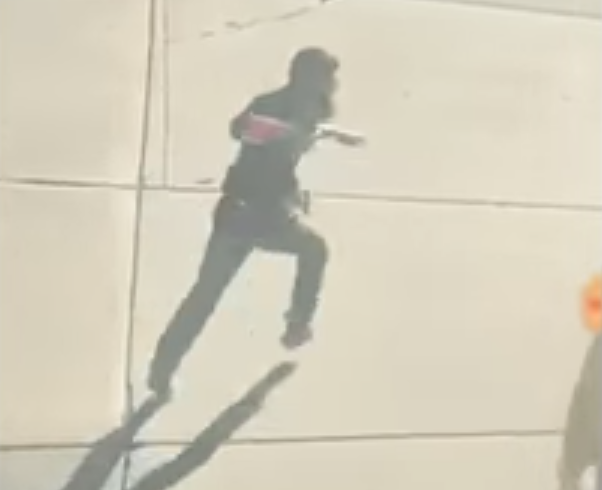 Video footage captured the attacker on the move on foot. Photo: Supplied

US President Donald Trump says he has ordered the Department of Homeland Security to heighten its “extreme vetting program” following a terror attack in New York City.

Eight people were killed and more than a dozen injured after a suspected terrorist drove a rented pickup truck along a bike path near New York’s World Trade Centre memorial.

Five Argentinian friends on holiday in Manhattan are among the dead, according to a report by The Guardian.

A Belgian woman visiting New York with her sister and mother is also reportedly among the fatalities.

“Being politically correct is fine, but not for this!”

This follows Mr Trump’s promise during his 2016 presidential campaign to crack down on illegal immigration for security reasons, calling for “extreme vetting” of foreigners entering the United States.

The President also sent his “thoughts, condolences and prayers to the victims and families of the New York City terrorist attack”.

“God and your country are with you,” he tweeted.

Detective Hubert Reyes of the Public Information Office of the Deputy Commissioner told The New Daily that the terror suspect remains alive but in a “critical” condition in hospital.

“There are no charges at this time,” he said.

“This is a federal investigation and it is ongoing.”

While not yet named by authorities, according to police sources the suspect is 29-year-old Uzbekistan-born Sayfullo Saipov.

NBC News quoted law enforcement sources as saying the alleged attacker left a note in the truck which claimed his allegiance to extreme militant group Islamic State (IS).

When contacted by The New Daily, Detective Reyes was unable to confirm reports relating to the note.

The New York Police Department (NYPD) praised the bravery of a first-responder officer who stopped the shooter from harming more people.

“I want to commend the response of our NYPD officer that was on post near the location who stopped the carnage moments after it began,” NYPD Commissioner James O’Neill told reporters.

Halloween parade goes ahead regardless

Despite the shadow of fear gripping New York, the city’s always-surreal Halloween parade marched on about 1.6 kilometres away and just four hours after the deadly attack.

The raucous spectacle rolled along with its floats, bands, anything-goes sensibility and thousands of spectators.

“We have had increased presence in the city today and at the parade,” Detective Reyes told The New Daily.

“The Halloween parade went ahead without incident.”