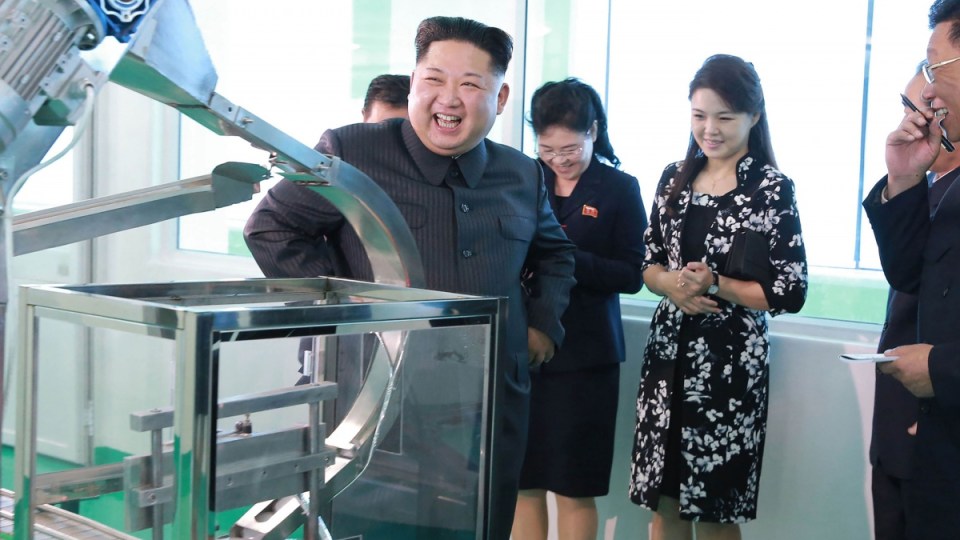 The wife of North Korean leader Kim Jong-un has made a rare public appearance, joining the supreme leader on a tour of a cosmetics factory in Pyongyang.

Lady Ri Sol-ju accompanied her husband and other senior North Korean officials on a tour of the recently revamped Pyongyang Cosmetics Factory on Sunday, according to Korean Central News Agency (KCNA).

Ri has been largely absent in the public eye in 2017 after allegedly having the despot’s third child in February.

The visit was broadcast nationally, showing a softer side of Kim’s tyrant image, who is often seen cheerily laughing on the sidelines of ballistic missile tests.

A smiling Kim was captured inspecting a range of cosmetic products including soap and women’s perfume alongside Ri, in her second public appearance this month.

Ri, donning a black and white floral dress for the occasion, stood alongside the North Korean leader as he urged women more to be “more beautiful”.

“The variety of cosmetics produced by the factory are numerous and qualitative,” he said according to KCNA.

“It has come to have the dream of the women who want to be more beautiful be realised.”

He reportedly was “very pleased” with the products and the packaging was “very nice”, KCNA stated.

The couple’s visit comes after increasing fears of a nuclear missile attack by the rogue state, according to US Defence Secretary Jim Mattis.

“North Korea has accelerated the threat that it poses to its neighbours and the world through its illegal and unnecessary missile and nuclear weapons programs,” Mr Mattis said on Saturday.

“I cannot imagine a condition under which the United States would accept North Korea as a nuclear power.”

Information about Kim’s mysterious wife is largely unknown since she married the supreme leader in 2009.

South Korean intelligence reports suggest Ri came from an ordinary family, with father believed to be an academic and her mother a doctor, The Daily Mail reports.

Kim and his wife have two other children who are believed to have been born in 2010 and 2013.

Knowledge of the Kim family has often been a mystery to the outside world, with very little information escaping the rogue state.

Earlier this year, Kim’s half-brother Kim Jong-nam, was assassinated at an airport in Kuala Lumpur.

The world’s attention turned again to the family when Kim’s youngest sister was elevated to the inner circle of North Korea’s top decision-making body earlier this month.

US President Donald Trump is expected to visit the South Korean capital of Seoul next month.