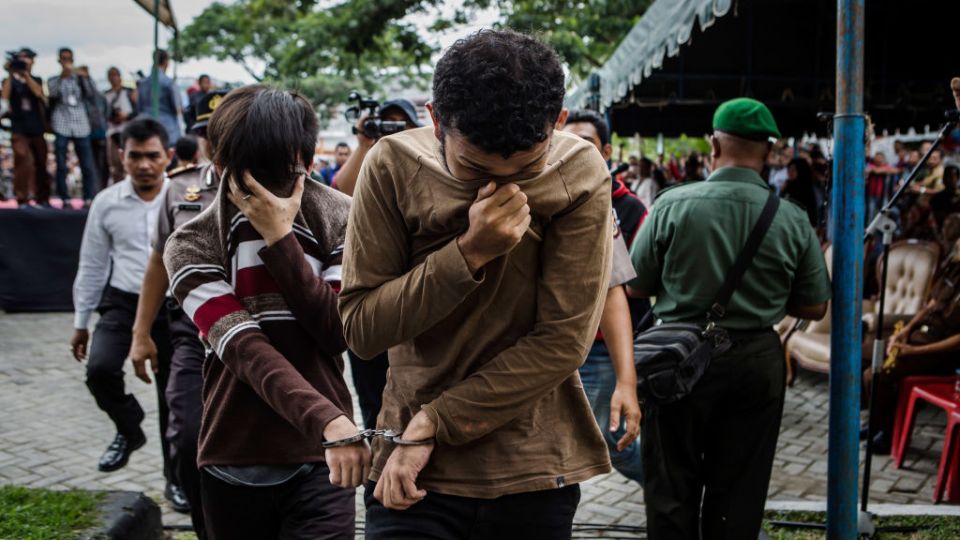 Two men arrive for caning for same-sex relations at a mosque in Aceh province of Indonesia. Photo: Getty

Hundreds of people have been publicly flogged in Indonesia since the Aceh province introduced stricter Sharia by-laws two years ago.

More than 530 people have been caned for homosexual sex, affection outside marriage, selling alcohol and gambling since October 2015.

In a report last week, Human Rights Watch said homosexual sex was punishable with up to 100 lashes and 100 months in prison. Sexual relations outside of marriage carried a penalty of up to 100 lashes, the advocacy group said.

Amnesty International has called for an end to the “degrading and inhuman punishment”.

“Public flogging and the criminalisation of same-sex relations are both flagrant violations of international human rights laws,” Usman Hamid, the director of Amnesty International Indonesia, told The New Daily.

Sharia law was first enforced in Aceh in 2011, and was escalated with the criminalisation of same-sex relations in October 2015, Mr Hamid said.

Homosexuality is not a crime elsewhere in Indonesia.

Earlier this year, vigilantes stormed the apartment of two men on suspicion of being gay. The men, aged 20 and 23, were publicly lashed more than 80 times each in May after being convicted in a Sharia court of having same-sex relations.

“The caning of two gay men was a sickening spectacle, carried out in front of more than 1000 jeering spectators, an act of utmost cruelty,” Mr Hamid said.

He said it was the first time gay men had been caned under the by-laws.

Indonesian President Joko Widodo has received worldwide condemnation for failing to step in and end the “outrageous act of cruelty”.

“We propose Indonesian authorities, especially President Widodo and Acehnese leaders, repeal the law which imposes these punishments, which constitute cruel, inhumane and degrading treatment and may amount to torture,” Mr Hamid said.

“The international community must put pressure on Indonesia to create a safer environment for the LGBTI community before the situation deteriorates further.”

The predominantly Muslim province, at the northernmost tip of Sumatra Island, is semi-autonomous. The Sharia by-laws apply to all residents, as well as tourists to the province.

Mr Hamid said Islamic conservatism was intensifying across the country.

“The continuing intolerant attitudes, including the largest conservative Muslim protests last year, have shown an increased conservatism,” he said.

“Discrimination against LGBTIQ has increased and this situation has been fuelled over the past year by a series of reckless, inflammatory and inaccurate statements made by public officials, apparently under the guise of ‘defending public morality’.”