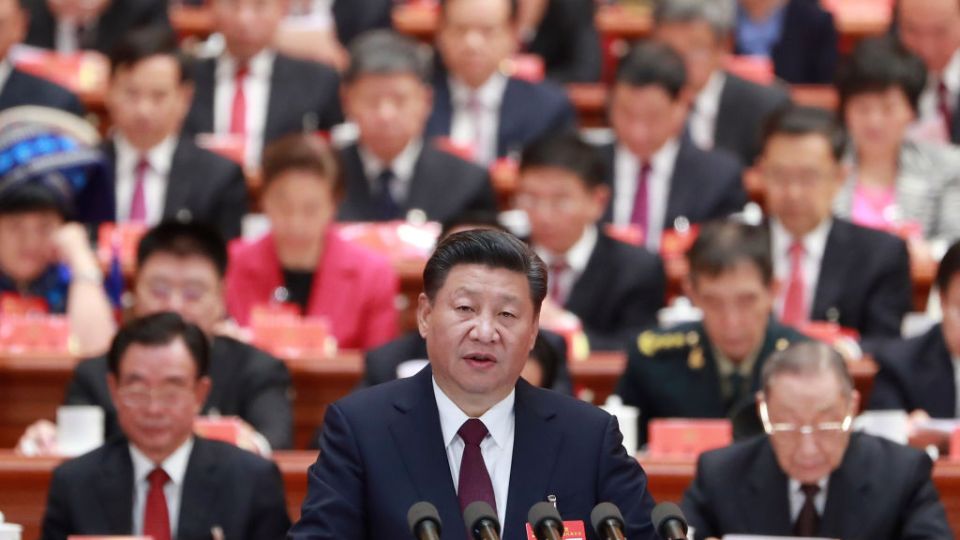 Xi Jinping delivers a report at the opening ceremony of the 19th National Congress of the Communist Party of China. Photo: Getty

President Xi Jinping wants to make China great again, but not in the same vein as Donald Trump, according to a leading academic.

The most powerful man in China since Mao is likely to be confirmed for a third five-year term at the close of the 19th Chinese Communist Party’s people’s congress on Tuesday.

“Both have the goal of making the country stronger and richer,” Dr Minglu Chen, senior lecturer at Sydney University, told The New Daily.

“Xi’s revitalisation of China has a different approach to the outside world. He thinks economic co-operation with other countries is good for China’s economic future.

“When Trump announced to ‘make American great again’, he demanded to re-evaluate the impact of globalisation on American economy.”

But to understand how the son of a senior party member, who was purged and jailed during the Chinese cultural revolution, came to the top of the pyramid requires an understanding of the Chinese dream and the mindset of China’s almost 1.4 billion citizens.

Dr Chen said the idea at the core of Mr Xi’s platform and the recent actions by the party is “the Chinese dream”, of which Mr Xi reportedly spoke of at length in his three-and-a-half hour speech to the Congress on Saturday.

The Chinese dream is the idea that China was great, before a century of humiliation at the hands of Western powers, and that the country will be great again.

Xi Jinping himself called it “the great rejuvenation of the Chinese nation”, after becoming General Secretary in 2012.

Dr Chen told The New Daily that many Chinese people do accept the idea of the dream, in part due to the success of the government in promoting Chinese nationalism.

Nick Henderson, director of China Practice at Asialink Business, agreed. He told The New Daily that Mr Xi and the Chinese Communist Party had done this by building a sense of Chinese pride and nationalism.

“He’s really been trying to find a way to unite the Chinese people,” he said.

“China is demonstrating a national pride, one of the things that come through is that China is going to take much more of an active role globally.”

Some Australians may have noticed a far more active role of China in global affairs over the past decade.

Territorial disputes with India over the tops of mountains in the Himalayas or with Japan, Vietnam and the Philippines over rocks and reefs in the South China Sea have been some of the more visible signals of expanded activity.

But Sydney University’s Dr Chen said the starting point for many of these actions is the question of legitimacy.

“If they are not elected the right to rule comes from the social contract of ‘I provide you with economic prosperity’,” she said.

But she said that it does not mean people do not question the government, even if at times it may seem that way from outside China.

“The Chinese see criticism coming from outside as unjustified, because people outside don’t understand all the nuance.”

This view was seconded by Mr Henderson, who said many Chinese people feel criticisms come from a western perspective.

But whether the Chinese Dream becomes a reality will not be decided on Tuesday, but rather in the next five years.