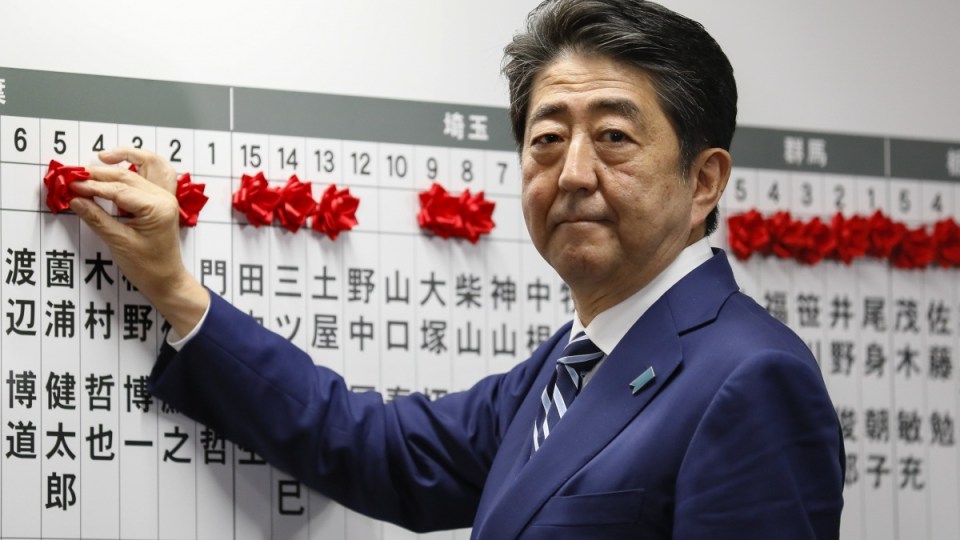 Final official results from the election are expected later Monday.

The 63-year-old prime minister, who has been in power for nearly five years, called a lower house election last month, despite criticism the move could create a political vacuum amid fears over North Korea’s nuclear and missile programs. Before the election, the LDP-Komeito coalition held 327 seats.

Turnout was lower than expected due to powerful Typhoon Lan, a category four storm, that lashed southern Japan, including the capital of Tokyo, with heavy rain. Flights were grounded and train services interrupted by the storm.

The election mattered for Australia and the world because Mr Abe campaigned hard on the pressing issue of what to do about the increasingly belligerent North Korean regime.

During the campaign, Mr Abe said he wanted to “continue to maximise the pressure on North Korea using every possible means”, and warned that “prioritising diplomacy and emphasising the importance of dialogue will not work”.

In contrast, his most powerful opponents, the Party of Hope, led by Tokyo governor and former broadcast journalist Yuriko Koike, and The Constitutional Democratic Party, led by former chief cabinet secretary Yukio Edano, appeared to want to rely more on diplomacy.

Mr Abe’s re-election was also significant because he is eager to amend Japan’s constitution to allow his armed forces to become a fully-fledged military. Ever since World War II, at the insistence of the US, Japan’s has been constitutionally restricted to a self-defence role only.

Experts say his victory is likely to embolden him to trigger a constitutional amendment.

The Japanese Communist Party and the Social Democratic Party wanted to maintain a war-renouncing constitution, while the Party of Hope was believed to support amendment.

The Party of Hope’s leader, Ms Koike, was a vocal supporter of Mr Abe’s proposed law to allow the Japanese military to fight wars overseas, although most scholars believe it would be unconstitutional.

The bill was defeated in 2015 because of a lack of support within Mr Abe’s own party.

Mr Abe’s Liberal Democratic Party won government in a landslide in December 2012 after he pledged to immediately work on economic stimulus measures and urged “unlimited” monetary easing by the Bank of Japan to pull the world’s third-largest economy out of a deflationary spiral.

Mr Abe has long been known for his tough stance towards North Korea. He gained popularity when he first ran for the Japanese parliament in 1993 by strongly denouncing the regime’s kidnapping of Japanese citizens in the 1970s and 1980s.