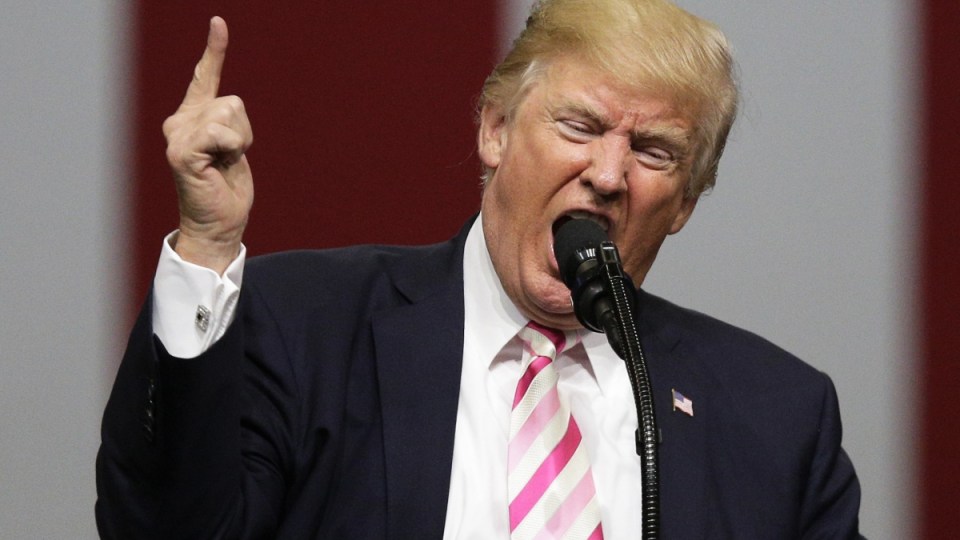 President Donald Trump threatens the very existence of the United States, according to a top Democrat. Photo: AP

US President Donald Trump has declared his opinion is the “one that matters” as North Korea’s foreign minister accused him of “lighting the wick of war”.

Russia’s state-run TASS news agency quoted North Korean foreign minister Ri Yong-ho on Thursday morning (AEST) as saying the United States will be made to pay for its anti-North Korean actions with “a hail of fire”.

Tensions between North Korea and the US have heightened in recent weeks over Pyongyang’s nuclear weapon and missile programs.

North Korea has test-fired several missiles and conducted what it said was a test explosion of a hydrogen bomb as it advances towards its goal of developing a nuclear-equipped missile capable of reaching the US mainland.

Ri said his country’s nuclear program guaranteed peace and safety in the region and would not be a matter of discussion.

“With his bellicose and insane statement at the United Nations, Trump, you can say, has lit the wick of a war against us,” TASS quoted Ri as saying.

“We need to settle the final score, only with a hail of fire, not words.”

Ri has previously called Mr Trump “President Evil” and his comments are likely to fuel an escalating war of words between the US president and North Korean leader Kim Jong-un.

“We have almost reached the last point on the journey towards our final goal – to achieve a real balance of power with the United States,” he said.

“Our principal position is that we will never agree to any talks in which our nuclear weapons will be the subject of negotiations.”

The angry rhetoric comes just a day after a South Korean MP revealed hackers from North Korea may have stolen highly classified military documents that include US-South Korean wartime “decapitation strike” plans against the North.

The South has taken an increasingly aggressive stance toward the North’s belligerence amid back-and-forth threats of war between North Korea and Mr Trump.

Among the classified plans allegedly stolen from the South were said to be blueprints for targeted attacks by Seoul and Washington to eliminate North Korean leader Kim Jong-un if a crisis breaks out or appears imminent. Kim is the third generation of his family to rule North Korea.

‘Only my attitude matters’

Mr Trump made the remark in response to a question about whether he and Secretary of State Rex Tillerson are on the same page on how to deal with the North Korean regime.

“I think I have a little bit different attitude on North Korea than other people might have,” he told reporters at the start of talks with Canadian Prime Minister Justin Trudeau at the White House.

Mr Trump has been tough on North Korea as the regime has fired a series of ballistic missiles and conducted its sixth and most powerful nuclear test in recent months.

He has threatened to “totally destroy” the nation if necessary and called Mr Tillerson’s efforts to reach out to the regime a waste of time.

“I think perhaps I feel stronger and tougher on that subject than other people, but I listen to everybody,” the president said.

On Tuesday, Mr Trump met with Defense Secretary Jim Mattis and Joint Chiefs of Staff Chairman General Joe Dunford to discuss a “range of options to respond to any form of North Korean aggression,” according to the White House.

The same day, the US flew two B-1B Lancer bombers near the Korean Peninsula in a show of force.

North Korea: Donald Trump says his opinion ‘one that matters’