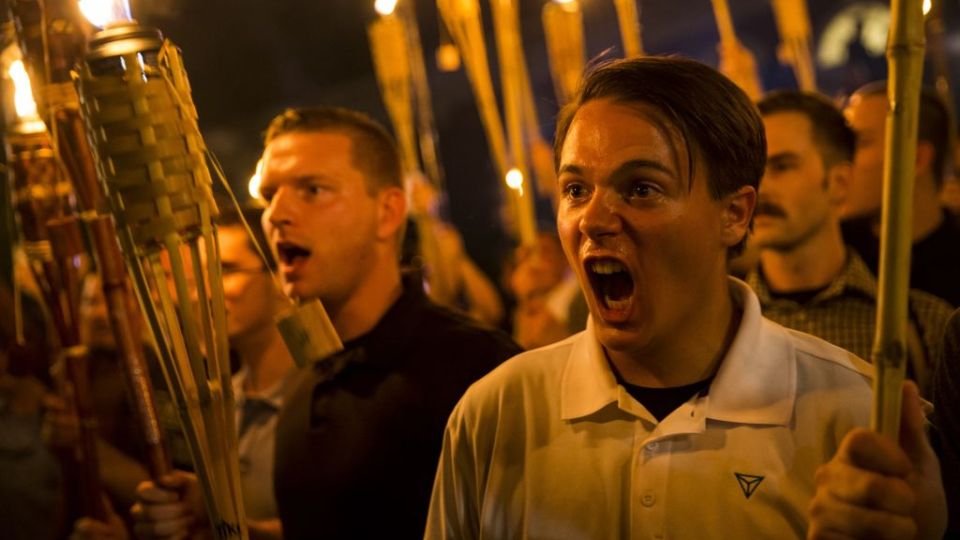 White supremacists chant their hate in Charlottesville during the first protest, which left a young women dead. Photo: Getty

A small group of white supremacists has gathered briefly in Charlottesville, Virginia, the city where a deadly clash occurred in August.

The group’s leader said in a social media video that his supporters had organised an “in-and-out flash mob” in the city on Saturday, where their August 12 rally set off clashes and left a woman dead when an avowed racist drove his car into a crowd of counterprotesters.

At the time US President Donald Trump drew condemnation from across the political spectrum, including his own conservative Republican Party, for his initial failure to directly condemn racist demonstrators while decrying violence on “many sides”.

Charlottesville television station WVIR reported that about three dozen people, some bearing torches, gathered on Saturday near a statue of US Confederate General Robert E Lee, dispersing after 15 minutes.

The Lee statue, which Charlottesville city officials plan to remove as a monument to the pro-slavery Confederacy’s attempt to secede in the 1861-65 US Civil War, was a rallying point in the August violence.

Richard Spencer, a leader in the neo-fascist movement, posted a video on Twitter calling the rally “a great success” and revelling in the unannounced provocation as a “model” he hoped to repeat.

“We came, we triggered [reactions], we left,” he said. “No major confrontations …We came in peace.”