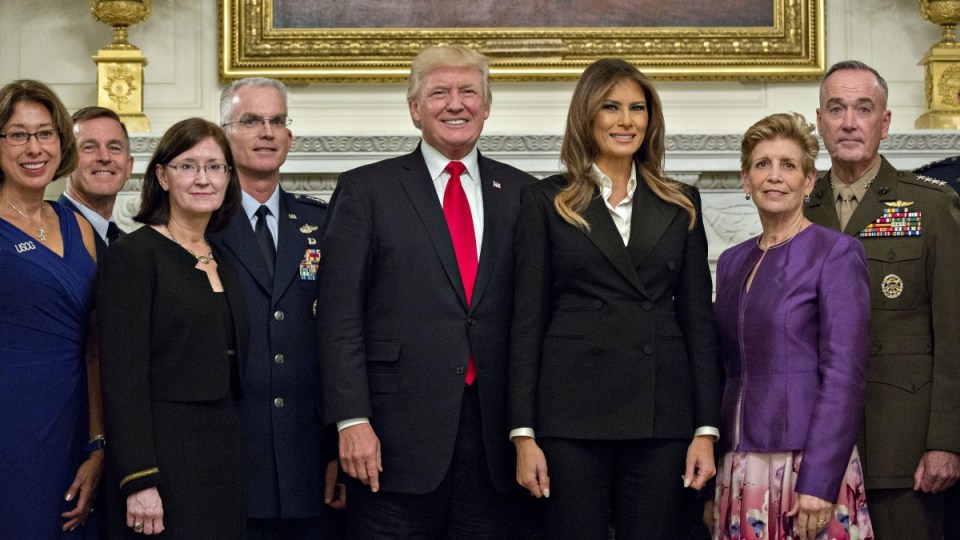 Trump (with wife Melania, various generals and guests) said the White House gathering was "the calm before the storm" Photo: Getty

In a week that saw the United States battered by its worst-ever mass shooting, the continuing fallout in Puerto Rico from Hurricane Maria and reports of turmoil at the highest levels of government, the country may have looked to its President for comfort.

Instead, Donald Trump unnerved them even more, with a cryptic comment that had large chunks of the population theorising about a possible attack on North Korea, more resignations from his cabinet or maybe the removal of special prosecutor, Robert Mueller.

Speaking before a White House dinner with military leaders, Trump used a photo opportunity with his dinner guests to tell gathered press the event was “the calm before the storm”.

He compounded the cryptic comment by grinning maniacally and then refusing to say what storm exactly was about to break.

“You guys know what this represents?” he asked the media throng as military brass stood behind him.

“Maybe its the calm before the storm,” he said. Asked to elaborate, he added with a grin: “You’ll find out.”

Earlier, Trump had told military leaders the US faced challenges that “we really should have taken care of a long time ago, like North Korea, Iran, Afghanistan, ISIS and the revisionist powers that threaten our interests all around the world”.

He claimed “tremendous progress” had been made in the fight against Islamic State and hinted an escalation might be in the offing.

“With respect to ISIS, and I guess the media is going to be finding out about that over the next short period of time,” he said.

Meanwhile, The Washington Post reported that Trump will soon announce he will decertify the US/Iran nuclear deal brokered under the Obama administration that saw Iran suspend its nuclear program in exchange for sanctions relief.

The Post reported that Trump is expected to give a speech late next week announcing his decision and outlining the results of a months-long Iran policy review.

“People familiar with his thinking say he will not certify that Iran is honoring its commitments and will declare that sticking with the deal is no longer in the U.S. national interest,” the paper said.

The decision is almost certain to alienate European signatories to the deal who believe Iran is honoring its commitments.

Even for the tumultuous Trump presidency, this past week has been a particularly volatile one: he called the massive toll of death and injury in Las Vegas “in many ways, a miracle”; visited Puerto Rico and was seen gratuitously tossing paper towels into an audience of hurricane victims; and was forced to angrily deny numerous claims that his Secretary of State, Rex Tillerson, had to be talked out of resigning just weeks ago and was heard to call Trump a “f***ing moron”.

Within hours of his “calm before the storm” comment, Trump addressed a Hispanic Heritage Month gathering at the White House and made no mention of what may be in store.