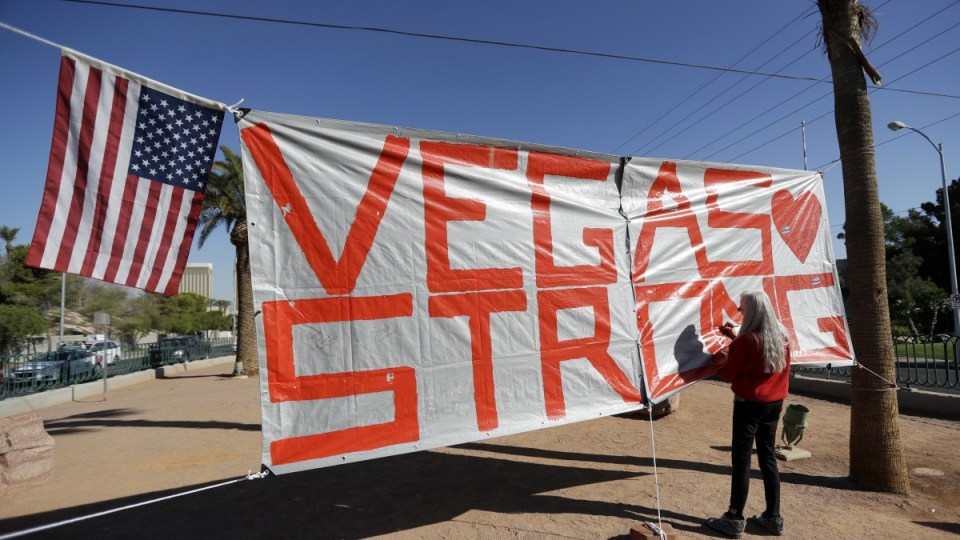 Paddock may have targeted other music festivals up to months ahead of the Las Vegas shooting. Photo: AP

The Las Vegas gunman responsible for the worst shooting massacre in modern US history may have targeted other music festivals in the days and months ahead of Sunday’s tragedy.

Stephen Paddock, a 64-year-old retired accountant, fired on an open-air country music festival from the 32nd floor of the Mandalay Bay Casino and Resort, killing 58 people and injuring almost 500 before taking his own life.

Sheriff Joseph Lombardo told reporters he had seen evidence that Paddock may have planned to survive the attack.

As investigators continue to search for a motive, details have emerged of previous hotel bookings for rooms overlooking music concerts in Las Vegas and Chicago.

The official told AP that no evidence has been found that Paddock ever actually travelled to Chicago that weekend.

The Lollapalooza festival attracts hundreds of thousands of music fans every year to Chicago’s Grant Park.

The weekend before the Las Vegas shooting, Paddock checked into a 21st floor apartment at the Ogden hotel in Las Vegas, rented via Airbnb, that overlooked the Life is Beautiful music festival, Clark County Sheriff Joseph Lombardo revealed this week.

Sheriff Lombardo did not speculate on Paddock’s reason for renting the apartment, but as a high-stakes gambler the shooter could have qualified for a free room at one of the city’s casinos.

Paddock requested an upper-floor room with a view of the Route 91 Harvest music festival when he checked into the Mandalay Bay on Sept. 28, the AP quoted a person with access to the hotel records.

Investigators, meanwhile, believe Paddock stockpiled his arsenal of weapons and ammunition over decades, and meticulously planned the Las Vegas attack.

“What we know is that Stephen Paddock is a man who spent decades acquiring weapons and ammo and living a secret life, much of which will never be fully understood,” Sheriff Lombardo said Thursday.

“You have to make an assumption that he had some help at some point,” he said.

Police recovered nearly 50 firearms from three locations they searched, nearly half of them from the hotel suite.

Twelve of the rifles there were fitted with so-called bump stocks, officials said, allowing the guns to be fired almost as though they were automatic weapons.

Sheriff Lombardo said investigators were examining the possibility Paddock’s purchase of more than 30 guns in October 2016 may have been precipitated by some event in his life. He did not elaborate.

There remained no evidence as yet “to indicate terrorism” in the shooting spree, said Aaron Rouse, FBI special agent in charge of the Las Vegas field office.

The general manager of Guns & Guitars, a store where Paddock had previously bought weapons, told USA Today that his last purchase was the Thursday prior to the mass shooting.

While it is understood that none of their guns were used during the shooting, store owner Christopher Sullivan identified some of the weapons found in the hotel were ones they had cleaned for him.

“It was a normal day. He came in and filled out his paperwork, went across the street, did some shopping at Walmart, came back, shook my hand, said ‘have a great day’ and out the door he went,” Mr Sullivan told USA Today.

“He never would’ve given an inclination about what was going on in his mind. It’s something I’ve run through my head a million times trying to figure out if I’ve missed something.

“Could we have done anything differently? I don’t think we could have. Nobody in town knew who he was or what he was capable of, and neither did we.

“He was upbeat, happy, normal guy … It just wasn’t there, man. At some point, he snapped. What made him snap? I don’t know.”

Paddock’s girlfriend Marilou Danley was questioned by the FBI on Wednesday and said in a statement she was unaware of the Paddock’s plans.

“He never said anything to me or took any action that I was aware of that I understood in any way to be a warning that something horrible like this was going to happen,” Ms Danley, 62, said in a statement released by her lawyer Matt Lombard.

Ms Danley returned on Wednesday from a family visit to the Philippines. She is regarded by investigators as a “person of interest”.

Mr Lombard said his client was co-operating fully with authorities.

An FBI official in Las Vegas, meanwhile, said no one has been taken into custody.

An Australian citizen of Filipino heritage, Ms Danley said she flew back to the United States voluntarily “because I know that the FBI and Las Vegas Police Department wanted to talk to me, and I wanted to talk to them”.

Ms Danley, who was twice married before her relationship with Paddock, became a focus of the investigation for having shared his retirement community home in Mesquite, Nevada, northeast of Las Vegas, before leaving the United States for the Philippines in mid-September.

FBI Investigators questioned her about Paddock’s weapons purchases, a $US100,000 ($A127,690) wire transfer to a Philippine bank that appeared to be intended for her, and whether she saw any changes in his behaviour before she left the United States.

Ms Danley said Paddock had bought her an airline ticket to visit her family and wired her money to purchase property there, leading her to worry he might be planning to break up with her.

Discerning Paddock’s motive has proven especially baffling given the absence of the indicators typical in other mass shootings.

He had no criminal record, no known history of mental illness and no outward signs of social disaffection, political discontent or extremist ideology, police said.