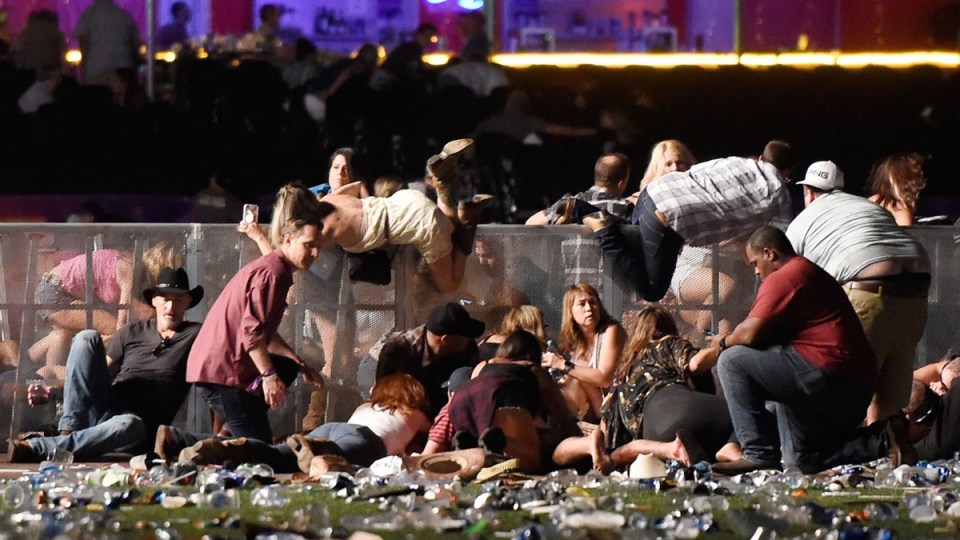 The death toll from the Las Vegas shooting continues to rise as investigators say they have made a disturbing find at the home of the alleged shooter.

At least 59 people are dead and more than 527 are injured after a lone gunman, named as retiree Stephen Paddock, opened fire on an outdoor country music concert in Las Vegas overnight.

The massacre was the deadliest mass shooting in United States history and the death toll is almost certain to rise as local hospitals fight to keep critically injured victims alive.

Paddock, 64, shot and killed himself as police burst into his room at the Mandalay Bay hotel.

He’d used the room to fire down on the 22,000-strong crowd watching headline act Jason Aldean as he closed the weekend-long Route 91 Harvest Festival in Las Vegas.

Police were quoted by local media as saying more than 18 firearms were discovered in the room, along with a hammer used to break his windows.

Las Vegas law enforcement say '527 people have been injured and 59 have been killed' in the massacre. MORE https://t.co/8DXl9xhiMi pic.twitter.com/fES3Lcbf1o

Las Vegas Sheriff Joe Lombardo told a media conference on Tuesday morning (AEST) that police had so far recovered “in excess of” 18 additional firearms, explosives and several thousand rounds of ammunition at Paddock’s home in a retirement community in Mesquite, Nevada.

“Some electronic devices were also retrieved which the department is evaluating,” he said.

Sheriff Lombardo said investigators are now focused on Paddock’s room on the 32nd floor of the Mandalay Bay Hotel and Casino from where he fired on the crowds, the concert event location and the shooter’s house in Mesquite.

He said SWAT teams were also standing by at a home in northern Nevada.

Nevada congresswoman Dina Titus told CNN that housekeepers had visited Paddock’s hotel room and “saw no signs of anything”.

“It was pretty well hidden,” Ms Titus said. “Just hard to ever imagine or anticipate it.”

Paddock had legally bought multiple firearms in the past, several of them in California, CNN quoted a law enforcement official as saying, but they were not among the guns found in the Mandalay Bay hotel room.

A Mesquite store, Guns & Guitars, said it sold a firearm to Paddock and that “he never gave any indication or reason to believe he was unstable or unfit at any time”.

Paddock’s brother, Eric Paddock, said the alleged gunman had worked as an accountant and had “plenty of money”.

“He was a wealthy guy playing video poker … going on cruises,” he said, adding that his brother could afford anything he wanted.

He said he last communicated with his brother via text message more than a week ago when Stephen Paddock asked about their mother who’d lost power during Hurricane Irma.

Eric Paddock said he has no idea why his brother would kill anybody and found out about the shooting when police called to inform his family.

“He was my brother and it’s like an asteroid fell out of the sky,” he said.

The apartment complex at that address released a statement saying Paddock is not the current owner.

Stephen Paddock and his wife of less than five years divorced 27 years ago and she lives in Los Angeles, California. Authorities said she had no contact with him for several years.

Foreign Minister Julie Bishop on Tuesday morning said there were no reports so far of Australian victims.

“At this stage we have no indication that any Australians were hurt or injured,” she said.

Sheriff Lombardo said police are anxious to speak with Paddock’s partner Marilou Danley, who has been reported as being an Australian citizen.

He said he believed Ms Danley was in Tokyo, Japan.

“We are making arrangements to contact her upon her return,” Sheriff Lombardo said.

Paddock’s father was a notorious bank robber who at one point was on the FBI’s 10 most wanted list.

Benjamin Hoskins Paddock was on the list of most wanted criminals from 1969 to 1977 and was described in an FBI poster as being “diagnosed as psychopathic”.

He was apprehended after nine years on the run.

People were waiting up to eight hours to donate blood at some clinics in the area, according to Steve Sisolak, Clark County Nevada Commission Chairman, who said the city had received an outpouring of donations to help the victims.

“We have been deluged with donations,” Mr Sisolak said, referring to blankets, sandwiches, water and other necessities. “It’s almost to the point we can’t handle any more donations at the convention centre.”

Mr Sisolak had also set up a GoFundMe page to raise funds to for the shooting victims and their families with a goal of US$2.5 million. The site had received almost US$2 million at the time of publication.

President Donald Trump earlier described the shooting as an act of “pure evil” and ordered flags to be flown at half-mast across America.

Mr Trump called for unity in the wake of the attack, and said he would visit Las Vegas on Wednesday.