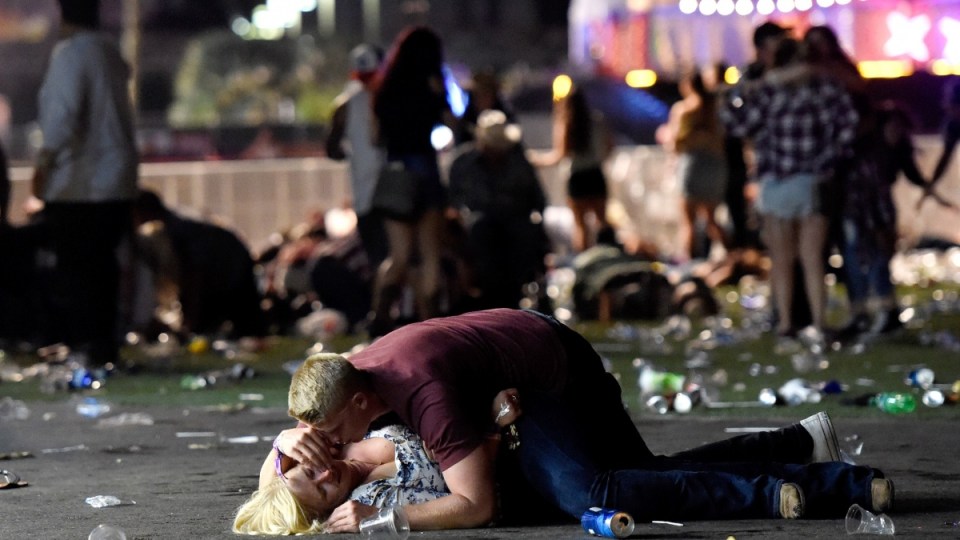 A man desperately comforts a woman in the aftermath of the Las vegas shooting Photo: Getty
analysis

In America, some things never change. In fact, they just get worse.

When I last lived and worked here 20 years ago, I came to the view that the country would forever wrestle with two intractable issues: race and guns. Back in the USA just a few days, those worst fears have been realised.

There’s ample, almost daily evidence of a worsening racial divide under the confused and conflicted presidency of Donald Trump.

And now, because of the appalling events in Las Vegas, there’s incontrovertible evidence that over the past two decades America has gone backwards on guns.

How else to explain the overnight shooting, already dubbed the worst mass killing in US history.

America woke to the news today and even for a country well used to such tragedies, this was a hard one to process: at least 58 dead, more than 500 injured and all at the hands of a lone gunman firing murderously during a country music festival at the nation’s “holiday playground”.

Sadly, it doesn’t get much more American than that.

The shooter, 64-year-old Stephen Paddock, died by his own hand on the 32nd floor of the Mandalay Bay Hotel from where he’d taken aim, but not before exacting a toll that rivalled those of recent hurricanes Harvey, Irma and Maria, each dubbed a national emergency.

That he could kill so many in just a matter of minutes was brutal testament to America’s lax gun laws that are so bent out of shape these days that Paddock had, and might have used, more than ten automatic weapons, probably obtained legally.

Two decades ago we were horrified when 13 died in the Columbine massacre. Since then the tolls have climbed regularly with 49 dying in the Pulse Nightclub massacre last year and now 58-plus in Las Vegas.

Trump, who came to power as a proud defender of those same lax laws, took to Twitter just after 7 am on the east coast to offer his “warmest condolences to the victims and families”.

Four hours later he addressed the nation, calling the Las Vegas massacre “an act of pure evil” and “senseless murder”.

My warmest condolences and sympathies to the victims and families of the terrible Las Vegas shooting. God bless you!

Sticking rigidly to a script he read robotically from a teleprompter, Trump stayed clear of the guns issue or the investigation itself. No doubt that and the politics thereof will come later.

Past presidents also weighed in with Bill Clinton saying the Las Vegas shooting “should be unimaginable in America” and Barack Obama tweeting: “Michelle & I are praying for the victims in Las Vegas. Our thoughts are with their families & everyone enduring another senseless tragedy.”

It took the mother of a victim of the Sandy Hook shooting to acknowledge the elephant in the room.

Nelba Márquez-Greene, who lost her six-year-old daughter in the 2013 massacre of 26 children and teachers, tweeted that Congress was to blame for not taking action against gun violence.

“This is on every congressperson who said in ‘13: There is simply nothing we could do,” Márquez-Greene wrote, adding in a separate tweet: “We need sensible gun legislation and we need it now.”

Soon Democrat Senator Elizabeth Warren amplified the sentiment, calling for a  “conversation about how to stop gun violence”.

Former vice president, Joe Biden, also who weighed in with: “How long do we let gun violence tear families apart? Enough. Congress & the WH should act now to save lives. There’s no excuse for inaction.”

Of course, they were all right.

But there wouldn’t be a bookmaker in Las Vegas who wouldn’t bet they’ll all wind up disappointed.