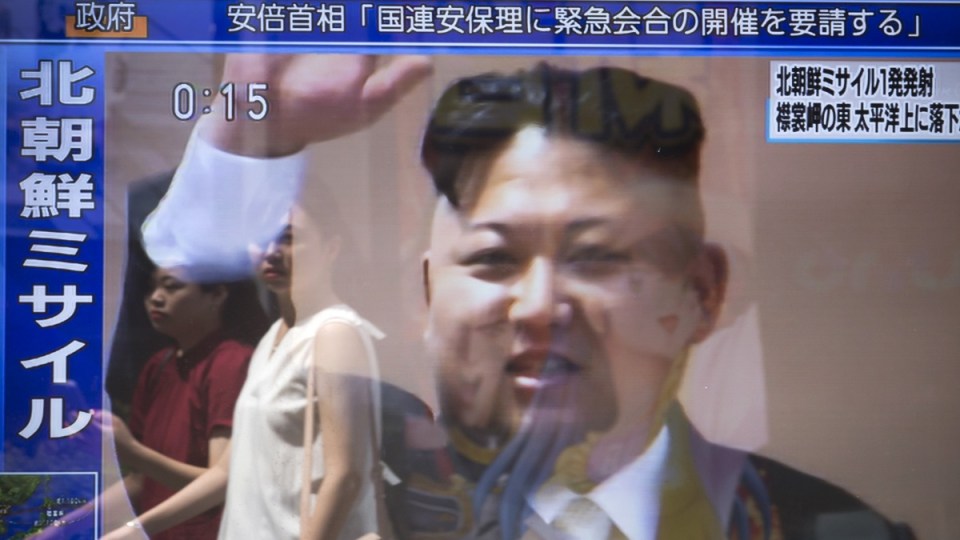 Donald Trump appears to have turned away from negotiations with North Korea. Photo: Getty

In a series of tweets Monday morning (AEST), Mr Trump said he “told Rex Tillerson, our wonderful Secretary of State, that he is wasting his time trying to negotiate with Little Rocket Man”.

“Save your energy Rex, we’ll do what has to be done!” the President continued.

Mr Trump’s tweets come a day after Mr Tillerson said the US had direct lines of communication with North Korea and that he was trying to “calm things down” following months of escalating rhetoric over Pyongyang’s continued nuclear weapons and ballistic missile tests.

…Save your energy Rex, we'll do what has to be done!

Speaking from Beijing over the weekend, Mr Tillerson, said the US made it clear through its direct channels to North Korea that it was seeking peace through talks.

“We’ve made it clear that we hope to resolve this through talks,” he said.

“I think the most immediate action that we need is to calm things down. They’re a little overheated right now, and I think we need to calm them down first.”

When asked whether North Korea would come to the negotiating table, the secretary of state said: “We are probing, so stay tuned.”

Being nice to Rocket Man hasn't worked in 25 years, why would it work now? Clinton failed, Bush failed, and Obama failed. I won't fail.

The US is attempting to pressure North Korea to halt its weapons program, which has seen it launch repeated missile tests, as well as what it claims is a successful test ofa miniaturised hydrogen bomb which could be loaded on to a long-range missile.

China last week told North Korean businesses operating in its territory to close down as part of fresh United Nations sanctions against the reclusive state.

Dr Roberts, who served as US deputy assistant secretary of defence for nuclear and missile defence policy between 2009 and 2013, warned Australia could be struck by a North Korean weapon.

“Unfortunately, Australia doesn’t really get to choose whether or not North Korea threatens it – it’s the choice that the North Korean leader [Kim Jong-un] makes,” he said.

The report cited an unnamed intelligence source saying South Korean and US officials detected missiles being transported away from North Korea’s Missile Research and Development Facility at Sanum-dong in the northern part of Pyongyang.

The report did not say when or where they had been moved.