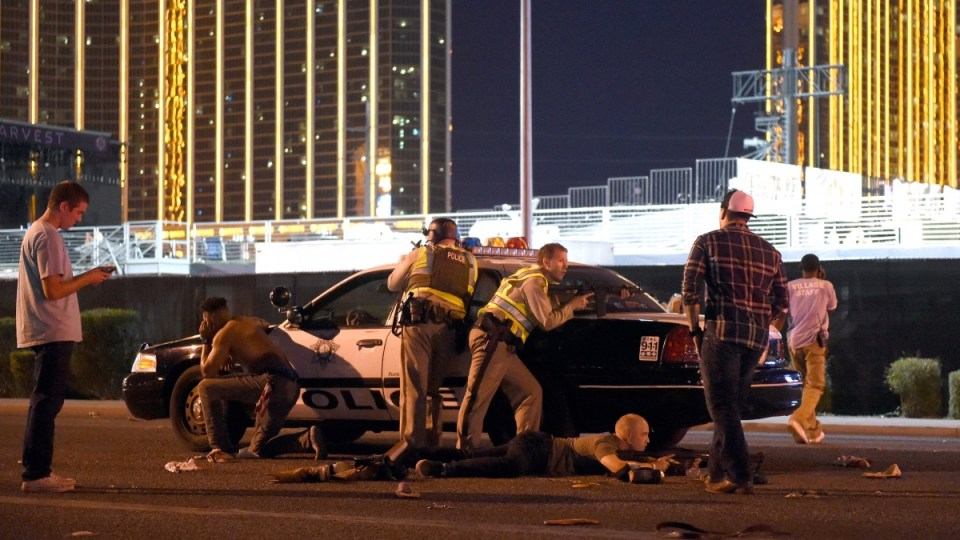 Police in Las Vegas are responding to reports of an active shooter at the Mandalay Bay Hotel and Casino. Photo: Getty

At least 59 people are dead and more than 527 are injured after a lone gunman opened fire on an outdoor country music concert in Las Vegas overnight.

The massacre is the deadliest mass shooting in United States history and the death toll is almost certain to rise as local hospitals fight to keep critically injured victims alive.

The suspected gunman, 64-year-old Stephen Paddock, shot and killed himself as police burst into his room on the 32nd floor of the nearby Mandalay Bay Hotel and Casino.

He’d used the room to fire down on the 22,000-strong crowd watching headline act Jason Aldean as he closed the weekend-long Route 91 Harvest Festival in Las Vegas.

Local Sheriff Joe Lombardo said officers found more than 10 rifles in Paddock’s room, where he’d been staying since checking in on September 28.

The AP quoted sources involved with the investigation as saying there were at least 17 guns in Paddock’s room.

In a televised address to the nation Monday morning US time, President Donald Trump described the shooting as “an act of pure evil” and credited police for saving lives by finding Paddock relatively quickly.

The first reports of the shooting came at 10:08 pm local time and shortly before midnight, police reported that “one suspect is down”.

Mr Trump described the shooting as an act of “pure evil” and ordered flags to be flown at half-mast across America. He made no mention of the role played in the shooting by lax US gun laws – Paddock is believed to have obtained his weapons legally.

Police initially named his partner and Australian citizen Marilou Danley as a person of interest associated with Paddock, but early Monday released a statement saying they had interviewed her and did not believe she was involved in the shooting.

It is thought that Paddock used items of Ms Danley’s identification to book the Mandalay Bay hotel room.

Foreign Minister Julie Bishop on Tuesday morning said there were no reports so far of Australian victims.

“At this stage we have no indication that any Australians were hurt or injured,” she said.

Ms Bishop said Australian consular staff in both Los Angeles and Las Vegas had been increased.

“We are sending staff from our Washington embassy, experienced consular staff,” she said.

Aldean was onstage late Sunday night when shots from an automatic weapon suddenly rang out.

Concertgoer Ivetta Saldana, who was there with a friend, told local media the shots sounded like fireworks and she hid in a sewer.

“It was a horror show,” she told the Las Vegas Review Journal. “People were standing around, then they hit the floor.”

Another concertgoer, Tenaja Floyd of Boise, Idaho, said many of the people around her in the concert crowd also thought at first that the gunfire was fireworks.

“(But), I knew immediately, that wasn’t fireworks,” she said.

Ms Floyd said her mother, Jennifer, threw her to the ground and lay on top of her to protect her. As people started running out of the venue, she said, they thought they might be trampled, so they decided to join the rush to leave.

Jake Owen, a country singer who was on stage with Aldean when the shooting began, told CNN it was like “shooting fish in a barrel from where he was”.

“This is not an exaggeration: This shooting was going on for at least 10 minutes,” he added. “It was nonstop.”

“The fact that he had those kind of weapons is just — where the hell did he get automatic weapons?” Eric Paddock asked.

“He has no military background or anything like that,” he added. “He’s a guy who lived in a house in Mesquite (Nevada) and drove down and gambled in Las Vegas.”

The Islamic State group claimed responsibility for the mass shooting but its claim was discounted by US authorities.

The attack is the deadliest mass shooting in the United States since a gunman murdered 49 people at a nightclub in Orlando in June last year.

President Trump tweeted his condolences to the victims soon after 7 am Monday east coast time, as America woke up to the terrible news.

My warmest condolences and sympathies to the victims and families of the terrible Las Vegas shooting. God bless you!

He later made a televised address, describing the shooting as an act of “pure evil.”

“We are joined together in sadness, shock and grief,” the President said from the Diplomatic Room at the White House.

Mr Trump called for unity in the wake of the attack, and said that he would visit Las Vegas on Wednesday.

“In moments of tragedy and horror, America comes together as one,” Trump said.

The President, with his wife and staff, later observed a minute’s silence on the lawn of the White House.

Two off-duty police officers who were attending the concert were among the dead, Las Vegas Sherriff Lombardo said.

Police also asked the public to provide any cellphone footage of the incident to help with the investigation.

Witnesses say they saw multiple victims as they fled the gunfire.

Authorities shut down part of the Las Vegas strip and Interstate 15 during the police response.

After more than an hour of complete shutdown due to the shooting, some flights at Las Vegas McCarran International Airport resumed.

An Australian man believed the gunman was staying in the room next to him at the Manadalay Bay hotel.

“It was hardcore, like it was full machine guns for 20 seconds and then it stopped for five seconds then it just went again it,” Brian Hodge told Fairfax Media.

Las Vegas mayor Carolyn Goodman tweeted: “Pray for Las Vegas. Thank you to all our first responders out there right now.”