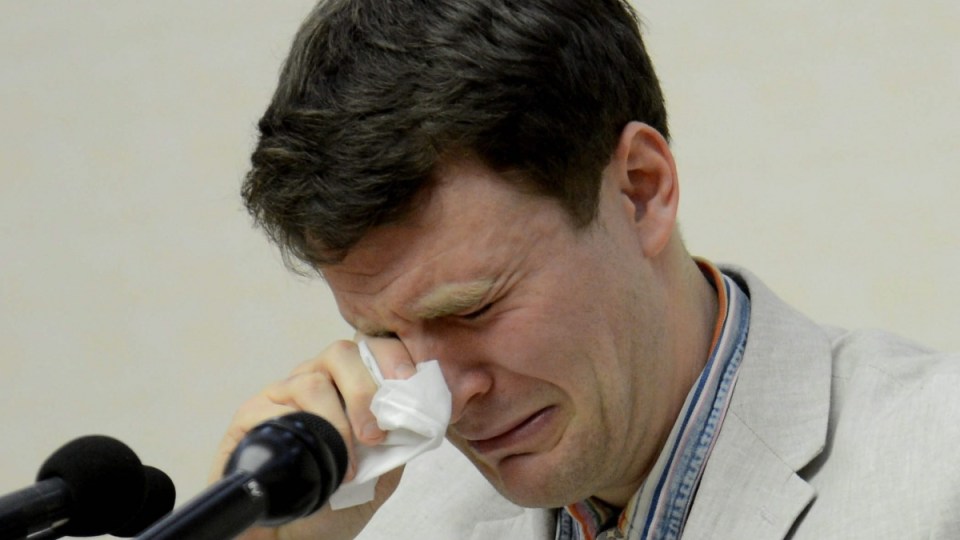 US student Otto Warmbier died within a week of his release from North Korean prison. Photo: KCNA

The parents of a young student from the United States held in North Korea for nearly a year and a half, and who died just days after he returned home, say their son was tortured, and have branded the nation as “terrorists”.

Fred and Cindy Warmbier, the parents of Otto Warmbier, 22, have appeared on Fox News as the Trump administration and North Korea trade barbs and tweets, threatening conflict.

But in their first television interview since their son’s death, the Warmbiers accused North Korea of playing the victim and called for the rogue nation to be listed as a state sponsor of terror.

“But now we see North Korea claiming to be a victim and that the world is picking on them, and we’re here to tell you: North Korea is not a victim,” Mr Warmbier said.

Otto was arrested in January 2016 at the end of a brief tourist visit to North Korea and was sentenced to 15 years of hard labour in March 2016 for allegedly stealing a propaganda poster.

The Warmbiers described how Otto arrived back in the US “jerking violently,” howling, and “staring blankly” when they went aboard the air ambulance that brought Otto back to to Cincinnati, Ohio, on June 13.

“When we got halfway up the steps, we heard this howling, involuntary, inhuman sound. We weren’t really certain what it was … Otto was on the stretcher across in the plane, and he was jerking violently, making these inhuman sounds,” Mr Warmbier said.

They said their son was also blind and deaf as well as having had his head shaved.

Mr Warmbier said Otto’s mouth “looked like someone had taken a pair of pliers and rearranged his bottom teeth”, and that his wife and daughter were so shocked by Otto’s state, that they ran off the plane at the sight of him.

“We weren’t prepared … no mother, no parent should ever have gone through what we went through,” Mrs Warmbier said.

She said it was “inexcusable” that her son had been alone in captivity for so long with no one to comfort him. She said she “got it together” and stayed with him after his arrival.

President Trump tweeted about the family’s appearance, calling it “a great interview” and that: “Otto was tortured beyond belief by North Korea.”

Mr Warmbier also said Otto also bore a large scar on his right foot and was running a high fever on his return.

Otto died less than a week after returning at a university hospital in Cincinnati.

“Unfortunately, the awful torturous mistreatment our son received at the hands of the North Koreans ensured that no other outcome was possible beyond the sad one we experienced today,” the Warmbiers said in a statement after his death.

US student kidnapped in North Korea was tortured ‘beyond belief’