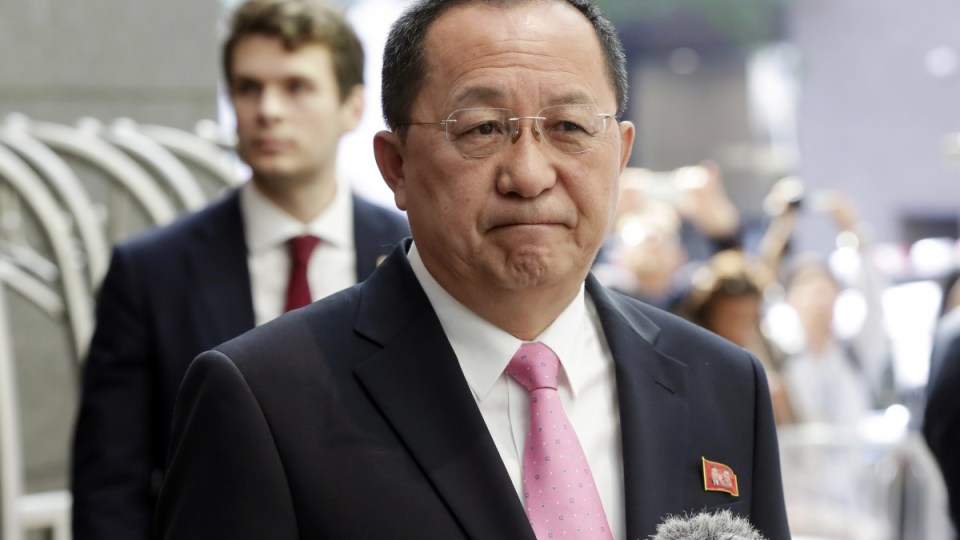 The conflict between North Korea and the United States has gone to a new level, with the rogue state accusing US President Donald Trump of declaring war, and reserving its right to shoot down US warplanes.

North Korea claimed that by tweeting over the weekend that North Korea “won’t be around much longer”, the President had effectively declared war on the nation.

In a dangerous, new escalation of the tensions between the two nations, North Korea’s Foreign Minister Ri Yong Ho said early on Tuesday (AEST) the gesture would allow North Korea to take “countermeasures” against US planes, even if they were in international air space.

“Last weekend Trump claimed that our leadership wouldn’t be around much longer escalated and declared a war on our country,” Mr Ri said, according to an official translation of his remarks to reporters outside the United Nations in New York.

“The whole world should clearly remember it was the US who first declared war on our country,” Mr Ri said.

“Since the United States declared war on our country, we will have every right to make countermeasures, including the right to shoot down United States strategic bombers even when they are not inside the airspace border of our country.

Speaking just two days after US warplanes flew close the North Korean coast, Mr Ri added: “In light of the declaration of war by Trump, all options will be on the operations table of the supreme leadership of the DPRK.”

“We have not declared war on North Korea and frankly the assertion of that is absurd,” Ms Sanders said.

“It’s never appropriate for a country to shoot down another country’s aircraft over international airspace.”

The Pentagon reacted angrily to Ri’s suggestions that Pyongyang could shoot down US bombers, even if they were not within the country’s air space.

“If North Korea does not stop their provocative actions, you know, we will make sure that we provide options to the President to deal with North Korea,” Colonel Manning said.

The Saturday tweet by Mr Trump referred to North Korea’s leader Kim Jong-un as “Little Rocket Man” and intimated that his actions to test ballistic missiles was effectively a suicide mission.

“Just heard Foreign Minister of North Korea speak at UN. If he echoes thoughts of Little Rocket Man, they won’t be around much longer!” Trump tweeted on Saturday.

Just heard Foreign Minister of North Korea speak at U.N. If he echoes thoughts of Little Rocket Man, they won't be around much longer!

Mr Ri told the UN General Assembly on Saturday that targeting the US mainland with its rockets was inevitable after “Mr Evil President” Trump called Pyongyang’s leader a “rocket man on a suicide mission”.

North Korea has previously said it had the right to take pre-emptive action against the US and South Korea, but Mr Ri’s threat on Tuesday to shoot down US planes in international airspace was, according to The New York Times, “a new element in the standoff”.

“I think they’re dangerously close to some kind of a conflict with North Korea,” said Mr Jae, the director of the US Korea Institute at the Johns Hopkins School of Advanced International Studies in Washington.

“This is something I feared,” he said. “When we go down this road, our escalation could lead to accidental shootouts, and it may not be so accidental.”

North Korea says it has right to shoot down US warplanes