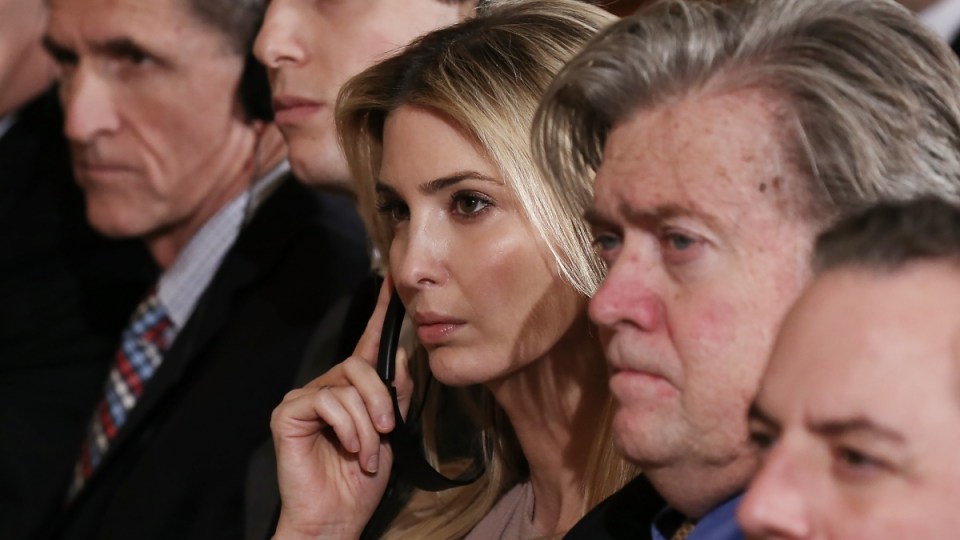 Ivanka Trump (C) and Stephen Bannon are among those thought to be using private email accounts. Photo: Getty

The disclosures came a day after news surfaced that Jared Kushner, the president’s son-in-law and adviser, used a private email account to send or receive about 100 work-related emails during the administration’s first seven months.

Ivanka Trump, the president’s elder daughter, who is married to Mr Kushner, used a private account when she acted as an unpaid adviser in the first months of the administration, Newsweek reported Monday.

Administration officials acknowledged that she also occasionally did so when she formally became a White House adviser. The officials spoke on the condition of anonymity because they were not authorised to discuss the matter with reporters.

Officials are supposed to use government emails for their official duties so their conversations are available to the public and those conducting oversight. But it is not illegal for White House officials to use private email accounts as long as they forward work-related messages to their work accounts so they can be preserved.

During the 2016 presidential race, Mr Trump repeatedly harped on Hillary Clinton’s use of a private account as secretary of state, making it a centrepiece of his campaign and using it to paint her as untrustworthy.

“We must not let her take her criminal scheme into the Oval Office,” Mr Trump said last year. His campaign rallies often boiled over with chants of “Lock her up!”

They literally ran an entire campaign against Hillary Clinton for using private emails.

The F.B.I. closed its investigation into Mrs Clinton’s handling of classified information and recommended no charges. But even after becoming president, Mr Trump has prodded the Justice Department to reinvestigate.

While the private email accounts spurred accusations of hypocrisy from Democrats, there are differences – Mrs Clinton stored classified information on a private server, and she exclusively used a private account for her government work, sending or receiving tens of thousands of emails.

The content and frequency of the Trump advisers’ emails remain unknown, but administration officials described the use of personal accounts as sporadic. The emails have not been made public.

“All White House personnel have been instructed to use official email to conduct all government related work,” Sarah Huckabee Sanders, the White House press secretary, said Monday in response to questions about the emails.

“They are further instructed that if they receive work-related communication on personal accounts, they should be forwarded to official email accounts.”

The acknowledgment of private email use came as the White House is responding to a wide-ranging Justice Department request for documents and emails as part of the special counsel investigation into Russian election meddling.

The use of private emails has the potential to complicate that effort, but the White House said it was confident in its process.

“I am dealing with honourable professionals and getting what I need,” said Ty Cobb, the White House lawyer leading the response to the investigation. “I am doing all I can to ensure the special counsel receives the materials they request.”

It is not clear why even sporadic use continued after a campaign in which email habits became a source of controversy. A former administration official noted, though, that in many cases, people received emails to their personal accounts. In some instances, officials used their private accounts to talk with reporters.

Most of Mr Trump’s aides used popular commercial email services like Gmail. Mr Kushner created a domain, IJKFamily.com, in December to host his family’s personal email. That domain was hosted by GoDaddy on a server in Arizona, records show.

Mr Priebus and Mr Bannon did not respond to messages seeking comment. A person close to Mr Bannon insisted he almost never used his private email for work purposes. A White House spokesman did not immediately respond to a question for comment about the current officials.

“These private email accounts become targets of phishing attacks or other types of ways of collecting information,” he said. “It’s an issue not only for the person who owns that account, but the person who is receiving the emails. It is introducing risk into the system.”

Richard Painter, a chief White House ethics lawyer under Mr Bush who is now the vice chairman of Citizens for Responsibility and Ethics in Washington, a watchdog group, said that there is often a “grey area” over what is considered official business. But, he said,

“I think Kushner was sloppy to do this,” he said. “I think Hillary was sloppy. I don’t think any of it was criminal.”

The special counsel, Robert Mueller, is leading the investigation into Russian interference in the presidential election and whether anyone around Mr Trump was involved.

Mr Mueller’s team has the power to subpoena a company to turn over customer emails. White House officials hope it does not come to that.

They have been hurrying to provide Mr Mueller with the documents he has asked for. Mr. Cobb has described it as “full cooperation mode.” He has reminded White House aides to search their private accounts for records to give to Mr Mueller.

The White House views such cooperation as its best chance to escape the glare of a special counsel investigation that also touches on Mr Trump’s actions as president.

The private email accounts immediately triggered questions in Congress. Representative Trey Gowdy, Republican of South Carolina, who was among those who most vociferously criticized Mrs Clinton’s email use, sent a letter to the White House and federal agencies asking about the Trump administration’s personal email use.

Representative Elijah Cummings, the senior Democrat on the House Oversight and Government Reform Committee, asked the White House to make sure that none of Mr Kushner’s emails are deleted.

“Before requesting copies or calling for the public release of all official emails you sent or received on your personal email account,” Mr Cummings wrote, “I first request that you preserve all official records and copies of records in your custody or control and that you provide the information requested below.”

Mr Cummings noted that Trump administration officials had previously said that senior White House officials did not use multiple email accounts. And he reminded the White House about the grilling that Mrs Clinton received from congressional Republicans over her email practices.

Both political parties have fought for years over the use of private email accounts. Long before Mrs. Clinton’s emails were a campaign issue, Democrats criticised members of the George W. Bush administration for the practice.