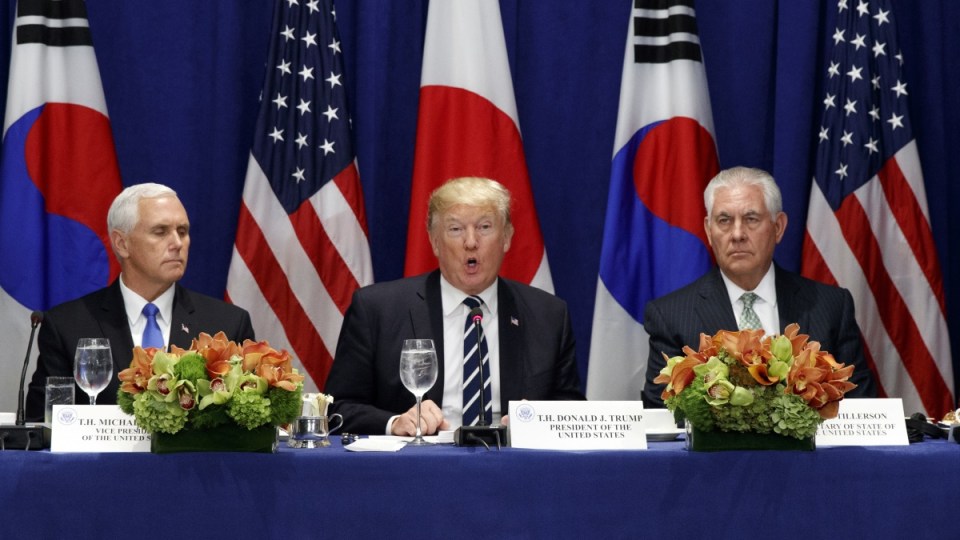 US President Donald Trump has announced a range of new measures designed to further isolate North Korea and cut the flow of cash to the rogue nation’s provocative nuclear program.

The President said Friday morning (AEST) the new executive order included sanctions that opened the door to blacklisting people and entities doing business with North Korea, including its shipping and trade networks.

The announcement comes days after Mr Trump made a fiery inaugural address to the UN General Assembly in which he said he would “totally destroy” North Korea if it threatens the US or its allies.

Pyongyang responded Thursday by ridiculing the US President, describing him as a “barking dog”.

“There is a saying that goes: ‘Even when dogs bark, the parade goes on’,” North Korean Foreign Minister Ri Yong Ho Ri told reporters in New York.

“If (Mr Trump) was thinking about surprising us with dog-barking sounds then he is clearly dreaming,” he said.

Ri is scheduled to address the UN on Friday.

Today, I announced a new Executive Order with re: to North Korea. We must all do our part to ensure the complete denuclearization of #NoKo. pic.twitter.com/igjOSM7N7h

Pyongyang has resisted international pressure, conducting its sixth and largest nuclear test on September 3, and launching numerous missiles this year, including two intercontinental ballistic missiles and two other rockets that flew over Japan.

“Our new executive order will cut off sources of revenue that fund North Korea’s efforts to develop the deadliest weapons known to humankind.”

Mr Trump said North Korea’s textiles, fishing, information technology, and manufacturing industries were among those the United States could target.

He said the US Treasury Department would have discretion to sanction foreign banks that conduct transactions tied to trade with North Korea.

The UN Security Council has unanimously imposed nine rounds of sanctions on North Korea since 2006, the latest earlier this month capping fuel supplies to the isolated state.

Earlier on Thursday, South Korean President Moon Jae-in, sitting with Trump and their respective delegations, said the US president’s warning to Pyongyang in his speech at the UN on Tuesday “will also help to change North Korea.”

On Thursday, South Korea’s Moon said sanctions were needed to bring Pyongyang to the negotiating table and force it to give up its nuclear weapons.

“All of our endeavours are to prevent war from breaking out and maintain peace,” Mr Moon said in his speech to the UN General Assembly.