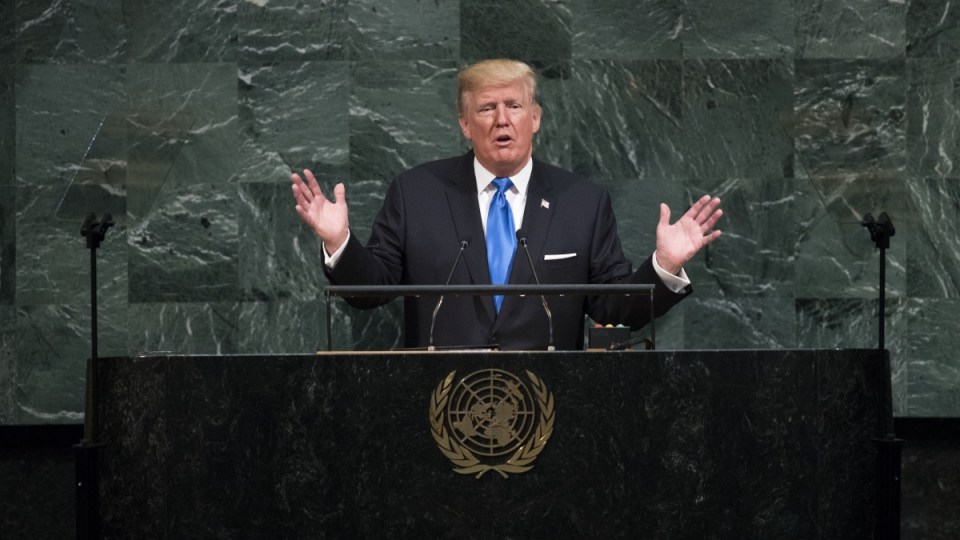 Donald Trump told the UN that "rocket man" Kim Jong-un was on a "suicide mission for himself and his regime". Photo: Getty

President Donald Trump has used his inaugural address to the United Nations to warn the world that the US is prepared to “totally destroy” North Korea.

Describing Kim Jong-un as “Rocket Man”, Mr Trump told the UN the North Korean leader was on a “suicide mission for himself and his regime” by pursuing his nuclear program.

Loud murmurs filled the green-marbled UN General Assembly hall on as the US President issued his sternest warning yet to North Korea, whose ballistic missile launches and nuclear tests have rattled the globe.

Unless North Korea backs down, he said: “We will have no choice than to totally destroy North Korea.”

Mr Trump urged United Nations member states to work together to isolate the Kim government until it ceases its “hostile” behaviour.

In a thinly veiled criticism of key North Korean ally China, he advocated stronger restrictions on trade with Pyonyang.

“It is an outrage that some nations would not only trade with such a nation but would arm, supply and financially support a country that imperils the world,” Mr Trump said.

“Rogue regimes not only support terrorists but threaten other nations with the most destructive weapon known to humanity,” the President said, referring to nuclear weapons.

The🇺🇸has great strength & patience, but if it is forced to defend itself or its allies, we will have no choice but to totally destroy #NoKo. pic.twitter.com/P4vAanXvgm

Kim has threatened Guam, a US territory in the Pacific, and has fired missiles over Japan, a US ally. North Korea also recently tested its most powerful nuclear bomb.

It was Mr Trump’s first appearance in the assembly hall, where applause from world leaders is generally muted.

Immediately before Mr Trump took the podium, UN Secretary General Antonio Guterres urged statesmanship, saying: “We must not sleepwalk our way into war.”

Big day at the United Nations – many good things, and some tricky ones, happening. We have a great team. Big speech at 10:00 A.M.

The US President also attacked Iran, calling it a “corrupt dictatorship” intent on destabilising the Middle East and calling on Tehran to stop supporting terrorism.

Mr Trump and again criticised the Obama-era international agreement to tolerate Iran’s nuclear program, which he called an embarrassment.

Reading carefully from a script, he promised the United States military would soon be the strongest it has ever been.

Mr Trump, who came to power promoting an America First agenda, told world leaders that the United States does not seek to impose its will on other nations and will respect other countries’ sovereignty.

“I will defend America’s interests above all else,” he said. “But in fulfilling our obligations to other nations we also realise it’s in everyone’s interest to seek a future where all nations can be sovereign, prosperous and secure.”

Earlier Trump tweeted: “Big day at the United Nations – many good things, and some tricky ones, happening. We have a great team.”