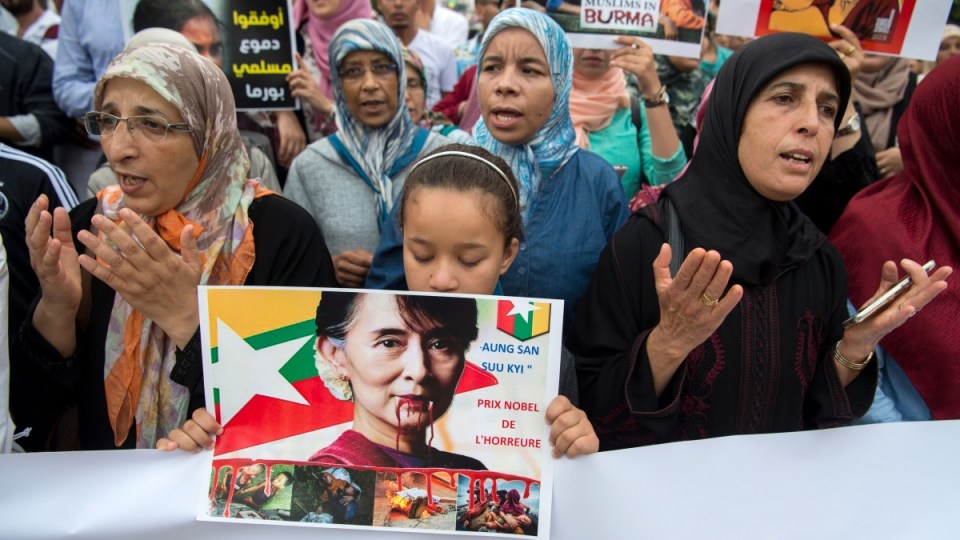 Aung San Suu Kyi is accused of no longer being a peace campaigner after breaking her silence on the Rohingya crisis. Photo: Getty

Myanmar leader Aung San Suu Kyi has sparked widespread criticism after breaking her silence on the Rohingya refugee crisis by insisting her country was not “afraid of international scrutiny’.

The Nobel Peace laureate on Wednesday made her first address to the nation since attacks by Rohingya Muslim insurgents in Rakhine State on August 25 led to a military response that has forced more than 410,000 Rohingya into neighbouring Bangladesh.

During the 30-minute speech made in English, Ms Suu Kyi said the Myanmar government needed time to find out “what the real problems are” in Rakhine state.

That was despite the fact that the UN and numerous rights groups have issued reports detailing the causes behind the inter-ethnic bloodshed.

Amnesty International described the speech as a “mix of untruths and victim blaming”.

The human rights group said Ms Suu Kyi and her government were “burying their heads in the sand” for ignoring the role of the Myanmar army in the violence.

The United Nations has branded the military operation in the western state ethnic cleansing. Ms Suu Kyi did not address that accusation, but said her government was committed to the rule of law.

“We condemn all human rights violations and unlawful violence. We are committed to the restoration of peace and stability and rule of law throughout the state,” Ms Suu Kyi, whose official title is State Counselor, said in her address in the capital, Naypyitaw.

Long feted in the West for her role as champion of democracy in the Buddhist-majority country during years of military rule and house arrest, Ms Suu Kyi has faced growing criticism for her silence over the abuses faced by the Rohingya.

Myanmar considers the Rohingya illegal immigrants from Bangladesh, despite the fact that many Rohingya families have lived in Rakhine state for decades.

“Action will be taken against all people regardless of their religion, race and political position, who go against the law of the land and violate human rights,” she said.

“We feel deeply for the suffering of all the people caught up in the conflict.”

Penny Green, a professor of law at Queen Mary University of London who studies the Rohingya conflict, was quoted by CNN as saying Ms Suu Kyi’s was “disingenuous” and “filled with underlying denials” that she said was “typical of the way in which state criminals behave.”

Ms Green said the Myanmar leader’s connection of the Rohingya to the ARSA militant group was behaviour common among those targeting an ethnic group.

“She [Ms Suu Kyi] chooses to use the word in relation to a terrorist group, that means that is the only identity that Rohingya will be attached to, from her perspective and she hopes from the international perspective,” Ms Green said.

She said Ms Suu Kyi’s claim that the Rohingya crisis was deescalating was particularly “absurd”.

Azeem Ibrahim, a senior fellow at the Center for Global Policy and author of The Rohingyas: Inside Myanmar’s Hidden Genocide, said Ms Suu Kyi was “no longer a peace campaigner”.