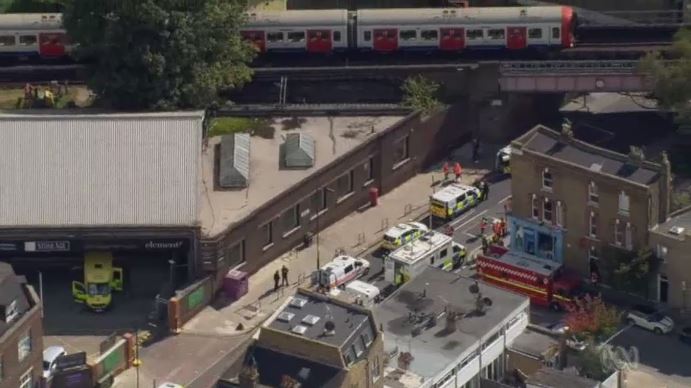 Police and emergency vehicles clog the street beneath the overpass where the targeted train came to rest. Photo: ABC

A second man has been arrested by detectives investigating Friday’s terrorist attack at Parsons Green, which left 30 people injured when a homemade bomb exploded during peak hour.

The 21-year-old was arrested in the suburb of Hounslow in London’s west just before midnight (local time), the Metropolitan Police force said in a statement.

He was detained under Britain’s Terrorism Act and taken to a south London police station but has not been charged or identified, the force added.

Earlier on Saturday (local time) police arrested an 18-year-old man in the city of Dover – the main ferry link to France – and raided a property in Sunbury, a small town outside London, as they hunted for whoever planted the device.

Hounslow is about six kilometres from Sunbury, where police raided and searched a building in connection with the bombing.

Neighbours were ordered to evacuate immediately and kept away for nearly 10 hours before being allowed to return to their homes, with authorities establishing a 100-metre cordon around the building.

Police described the evacuation as a “precautionary measure”.

“We are still pursing numerous lines of enquiry and at a great pace,” counter-terrorism coordinator Neil Basu of the London police said late on Saturday.

Police were also continuing to comb through CCTV images as part of the investigation.

The train hit by the bomber had video cameras in each car, and the London Underground network has thousands of cameras at the entrances to stations and along the labyrinth of subterranean and aboveground passageways leading from the entryway to the trains.

Bomb was intended to do grave harm, officials say

The homemade bomb, which was concealed in a bucket within a shopping bag, went off about 8:20am on Friday, as the train was carrying commuters from the suburbs, including many school children.

Officials said the bomb was intended to do grave harm to commuters, and analysts said the injuries would have been far worse had the entire device exploded.

The Islamic State group has claimed one of its units planted the bomb on the train.

The official threat level is not likely to be lowered until police believe all of the plotters have been taken into custody.

Hundreds of soldiers were deployed at strategic sites, including nuclear power plants and defence sites, on Saturday to free up armed police to help in the hunt for those behind the bombing.

The soldiers will also add to the police presence at public places to deter attacks, after the improvised explosive device was partially detonated on a District Line train.

The Parsons Green tube station was also reopened, restoring some normalcy to London’s transport network after a day of severe disruption.

Britain has endured four other attacks this year, which have killed 36 people.