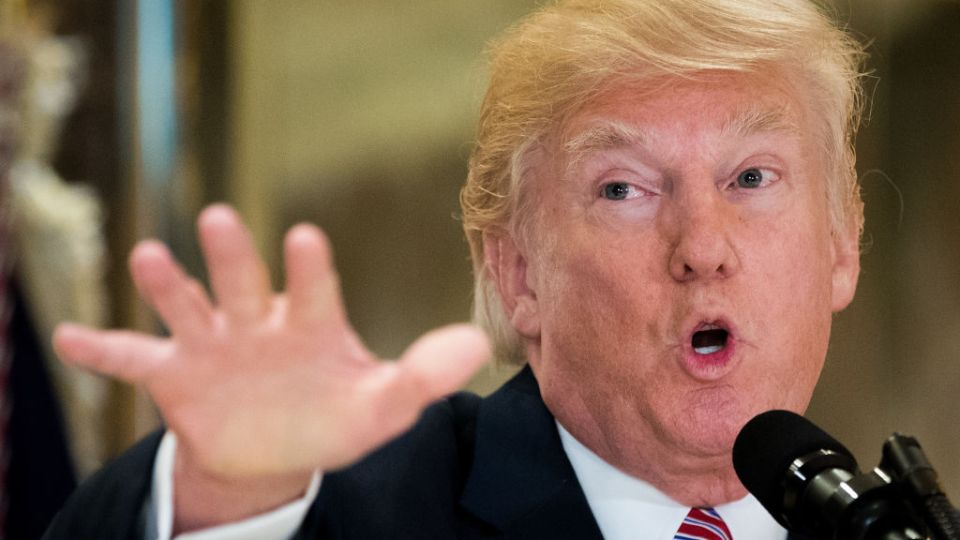 Donald Trump says a forthcoming book on his presidency is libellous. Photo: Getty

US President Trump has come under furious attack from some of his staunchest supporters after backsliding on key immigration promises.

President Trump is reportedly near a deal with the Democrats that would protect hundreds of thousands of young undocumented immigrants from deportation under the ‘Dreamers’ program initiated by Barack Obama.

He also announced Friday morning he would defer action on building his much vaunted border wall with Mexico, telling reporters “the wall will come later”.

Conservative commentator Ann Coulter, author of the book In Trump We Trust , went as far as to tweet: “At this point, who DOESN’T want Trump impeached?”

“If we’re not getting a wall, I’d prefer President Pence,” she added.

If we're not getting a wall, I'd prefer President Pence. https://t.co/g1mMhmm8ng

President Trump later denied making a deal on immigration with senior Democrats, saying any changes would be subject to a vote, but in a Twitter post confirmed his reversal in policy on DACA.

Does anybody really want to throw out good, educated and accomplished young people who have jobs, some serving in the military? Really!…..

DACA (Deferred Action for Childhood Arrivals) was an Obama-era policy that has allowed almost 800,000 so-called “Dreamers” to work and attend school in the US without the threat of deportation.

Earlier this month, President Trump moved to dismantle the program, saying he expected Congress and offered just a six-month delay until the dreamers’ two-year work permits began to expire in March.

Conservative radio host Laura Ingraham told listeners the political cost to President Trump and the Republican Party over the backflip would be steep.

“He’s going to get creamed for this,” she was quoted as saying by The Washington Post, reminding her audience of all the times during the election campaign Mr Trump chanted “Build the Wall!”

Ms Ingraham mocked President Trump’s statement on Friday morning that parts of the current border fence were being reinforced under his direction.

….and to chant "Build that NEW RENOVATION OF OLD FENCES!"

Listeners called called conservative radio programs to voice their disapproval, with some saying the President had confirmed what they suspected all along about the insincerity of his conservative convictions.

Other callers said the president, a self-proclaimed master negotiator, had been rolled by the Democrats, the Post reported.

“I always figured Trump would go Schwarzenegger on us,” said one caller into the Hugh Hewitt program, invoking the former California governor whom many conservatives believed sold them out.

“The No 1 reason I voted for him was for the immigration,” a caller to Ms Ingraham’s said.

“I want the wall. I want it to be seen in space, like the Chinese wall.”

Republican congressman Steve King predicted the President’s base was “blown up, destroyed, irreparable.”

@RealDonaldTrump If AP is correct, Trump base is blown up, destroyed, irreparable, and disillusioned beyond repair. No promise is credible. https://t.co/uJjxk6uX5g

Readers of the far-right Breitbart News, edited by former Trump chief strategist Steve Bannon, reacted angrily to a story accusing the President of ‘caving in’.

“Put a fork in Trump. He is done,” one reader wrote.