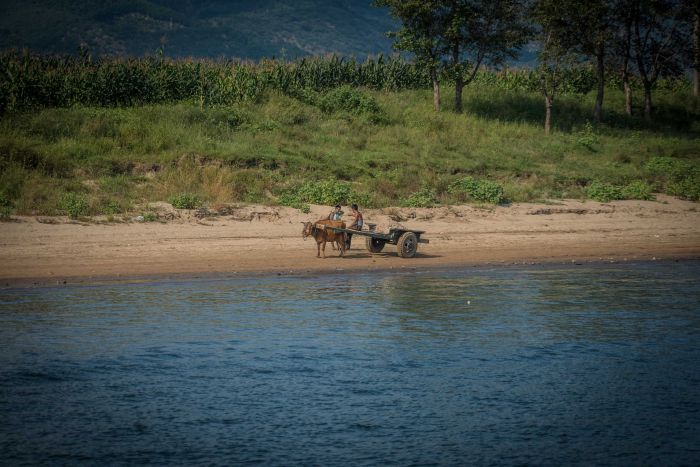 Tourist attraction: Agricultural workers tending a bullock-cart on the banks of the Yalu river. Photo: ABC

Just a few kilometres north of the thriving Chinese border city of Dandong, a daily routine plays out that highlights the huge gap between Asia’s two socialist allies.

Every hour during the day, dozens of Chinese boats speed off from a jetty on the Yalu river, packed with tourists, cameras and selfie sticks.

They speed down the water into North Korean territory, past fishermen, soldiers and agricultural workers tending bullock-carts.

As they gawk at their neighbours, a tour guide explains through a crackly speaker that North Korea isn’t as economically developed as China.

This appears to be the main drawcard for the thousands of Chinese tourists who come here every year.

“Everyone says North Korea is very poor, so I want to go there and take a look myself at how poor they actually are,” said a 74-year-old tourist who only gave his surname, Zhu.

The latest UN sanctions against North Korea, if enforced, will strip an estimated $940 million of income from Kim Jong-un’s regime by banning the export of textiles.

It will also cap, but not stop, the flow of oil that China pumps in a pipeline under the Yalu River.

There’s not much talk of international politics as the tourist boats pass a village and several watch posts dotted along a continuous wire fence on the North Korean side.

There is more interest in the armed soldier patrolling the shore and the children playing among the corn stalks.

After a few kilometres, the boats turn around and allow North Korean traders to pull up alongside and peddle cigarettes and souvenirs.

A man in a small boat shows off a souvenir to a larger boat full of tourists.

The guide warns everyone on board not to take photos, and there is an angry response from the trader when he sees our camera.

Locals in Dandong say North Korea allows the cross-border trips to get a cut of the revenue.

Cross-border tourism one of the few sources of income

After the latest sanctions, Chinese tourism to North Korea is now one of the few remaining ways for Pyongyang to legally bring in income.

It’s estimated about 100,000 tourists – the vast majority Chinese – enter the country each year.

But many more come to Dandong for cross-border day trips and to watch North Korean waitresses perform song and dance routines at joint-venture restaurants.

Those joint ventures have now been banned in the latest round of UN sanctions – raising a question on whether they can legally continue to operate as fully Chinese-owned businesses.

There are signs that local business people are finding ways to get around previous sanctions, such as the importation of North Korean seafood.

“The controls by the Chinese side are now very strict, but there are usually some Chinese fishing boats that are still willing to buy seafood from North Korean trawlers,” said one trader at the Donggang port wholesale market near Dandong.

North Korea has made it clear it will continue to work towards the goal of being able to threaten the US with a long-range nuclear missile.

But international gamesmanship seems a world away from the villagers toiling alongside the Yalu River at the border.

Some Chinese tourists yell and wave at them as the boats pass by, hoping for a reaction.

Not once did any of the North Koreans – adults and children alike – show the slightest interest in waving back.