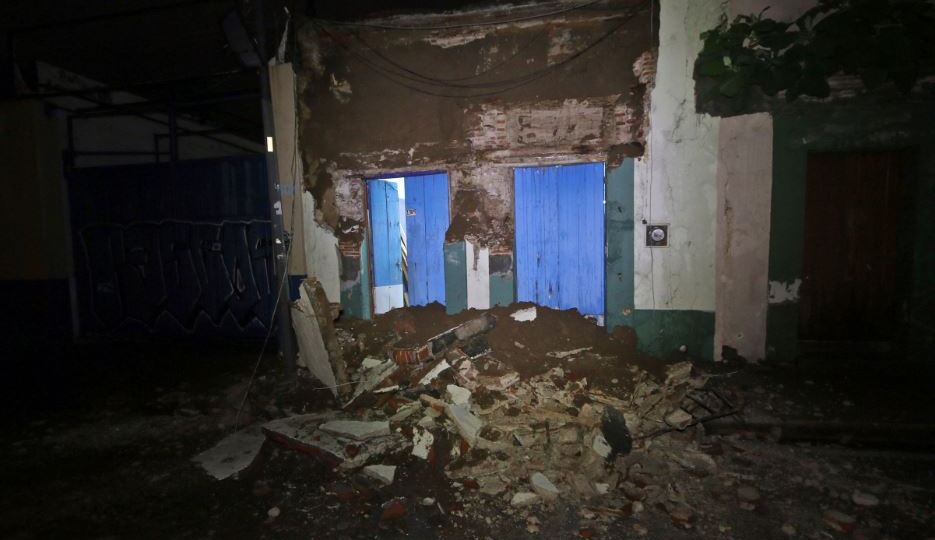 The entire front section of this home in Oaxaca was transformed in seconds to a pile of rubble.

A magnitude 8.1 earthquake that hit the southern coast of Mexico has killed at least 58 people, unleashing a series of small tsunamis now rolling across the Pacific and causing widespread damage.

But terrifying as it was, the quake could have been far more deadly.

The quake was apparently stronger than a devastating 1985 tremor that flattened swathes of Mexico City and killed thousands, but initial reports of damage in the city were limited.

Authorities attributed the lower cost in human life to stronger building codes introduced after the 1985 catastrophe.

These latest tremors were so strong that 1500 buildings were damaged.

The epicentre of the latest quake was 123km southwest of the town of Pijijiapan in the southern state of Chiapas, at a revised depth of 69km, the US Geological Survey says.

A tsunami was also confirmed for Mexico, with the largest wave measuring one metre, according to the Pacific Tsunami Warning Centre.

Three people were killed in Chiapas and two more are known to have died in neighbouring Tabasco state.

As far as 14,000km away in the Philippines, the national disaster agency put the country’s entire eastern seaboard on alert for a possible tsunami.

The Bureau of Meteorology says there is no tsunami threat to Australia.

In Mexico, some buildings were severely damaged in the south of the country, including a hotel where rescuers were searching to make sure nobody remained trapped in the rubble.

Windows were broken at Mexico City airport and power went out in several neighbourhoods of the capital.

Mexico’s President Enrique Pena Nieto described the earthquake as “the biggest magnitude to be recorded in our country in at least the last 100 years”, rating it at 8.2, slightly more powerful than the measurement provided by US seismologists

Mr Nieto said 1 million people were initially without power, though electricity had since been restored to 800,000 of them.

Alarms sounded and pyjama-clad residents ran into the streets of Mexico City after the quake struck just before midnight (3pm on Friday AEST), a Reuters witness said.

USGS reported six aftershocks, ranging in magnitude from 4.5 to 5.7.

Some 62 aftershocks followed the quake, with seismologists saying it is possible the next 24 hours could see a further major aftershock of as much as 7.2.

“I had never been anywhere where the earth moved so much,” said Luis Carlos Briceno, an architect, 31, who was visiting Mexico City. “At first I laughed but when the lights went out I didn’t know what to do.”

“I nearly fell over.”

In neighbouring Guatemala, President Jimmy Morales spoke on national television to call for calm while emergency crews checked for damage.

“We have reports of some damage and the death of one person, even though we still don’t have details,” Mr Morales said.

He said the unconfirmed death occurred in San Marcos state near the border with Mexico.