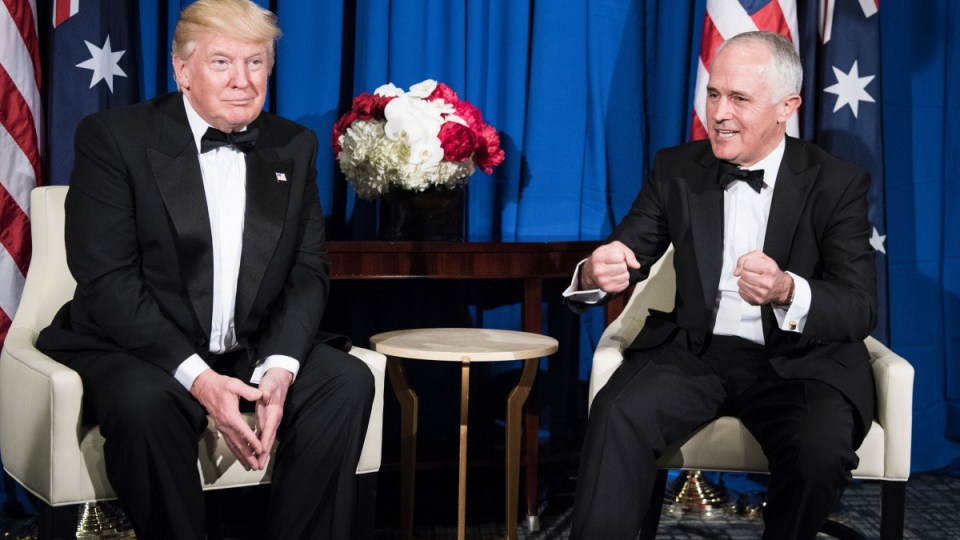 'We are joined at the hip," Mr Turnbull said last month of the alliance with the US. Photo: Getty

Prime Minister Malcolm Turnbull and President Donald Trump will discuss the North Korean crisis in a phone call on Wednesday.

The news came amid reports that North Korea was readying the launch of another missile, possibly an intercontinental ballistic missile.

Mr Trump has scheduled the call from the White House Oval Office for 7.45am (AEST), following discussions with other world leaders in recent days, including Germany’s Angela Merkel and South Korea’s Moon Jae-in, about the worsening situation in the region.

“We have a very close relationship with the United States in all of these defence and strategic matters, none closer,” Mr Turnbull told Sydney radio station Nova 96.9 on Tuesday, three days after North Korea conducted a hydrogen bomb test, its sixth nuclear test.

“The important point to remember is that everybody wants to get this resolved without conflict.”

The call comes a month after Mr Turnbull reaffirmed Australia’s support for the United States.

US Defence Secretary James Mattis has already warned of “a massive military response” to any threat from North Korea against the US or its allies.

Mr Trump tweeted on Monday the US was considering stopping all trade with any nation doing business with the pariah state – a risk for China, its largest trading partner.

“North Korea’s dangerous, provocative aggression is a grave threat to the security of the region and the stability of the world,” Mr Shorten told a caucus meeting on Tuesday.

He said China and the US should work closely on “practical steps”.

“Every time Donald Trump pushed them [North Korea], they push back even harder,” Mr Di Natale said. “We are sailing very close to the wind here with Australia backing Donald Trump all the way.

Mr Di Natale also called or the content of the phone call between the pair to be made public.

North Korea has been observed moving what appeared to be an intercontinental ballistic missile (ICBM) towards its west coast, South Korea’s Asia Business Daily reports, citing an unidentified intelligence source.

The rocket started moving on Monday, a day after North Korea’s sixth nuclear test, and was spotted moving at night to avoid surveillance, the report said, .

South Korea’s defence ministry said in parliament on Monday that North Korea was considered ready to launch more missiles, including ICBMs, at any time.

It comes amid speculation the rogue nation may be planning to fire an ICBM as early as this weekend when the republic celebrates its foundation on September 9.