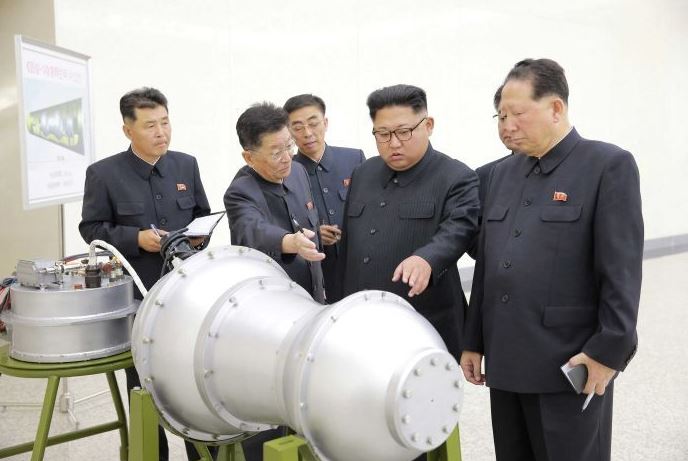 It was only eight months ago that Kim Jong-un was admiring his latest nuke. Now he's destroying them. Photo: KCNA

President Donald Trump has refused to rule out a military response to North Korea after Pyongyang successfully tested a hydrogen bomb capable of fitting in an intercontinental ballistic missile.

Secretary of Defense James Mattis said Monday morning that any threat to the US or its allies by North Korea would be met with a “massive military response”.

Speaking to reporters outside the White House, after a national security meeting with President Trump, Mr Mattis said the US had the ability to defend itself and its allies South Korea and Japan, adding that its commitments were “ironclad”.

“Any threat to the United States or its territories – including Guam – or our allies will be met with a massive military response, a response both effective and overwhelming,” he said.

Earlier Sunday, President Trump refused to discount the possibility of a US attack on North Korea.

As he left church, the President was asked: “Will you attack North Korea?” to which he answered: “We’ll see.”

The drill of both the airforce and army, involved surface-to-surface ballistic missiles and F-15K fighter jets hitting targets off the east coast of South Korea, according to a statement form the country’s Joint Chiefs of Staff.

The UN Security Council will hold an emergency meeting on Monday to discuss an international response.

President Trump has warned the United States may cease trade with any nation doing business with North Korea.

If the US goes through with the threat, it could mean a halt to trade with China, which remains North Korea’s key economic partner despite condemning its missile program.

The United States is considering, in addition to other options, stopping all trade with any country doing business with North Korea.

China is the United States’ largest trading partner in goods, with total trade between the two countries topping nearly US$650 billion (A$820 billion) last year, including exports of about US$170 billion and imports of about US$480 billion, according to the Office of the US Trade Representative.

The announcement came hours after a large earthquake that appeared to be man-made was detected near the North’s known nuclear test site, indicating that the reclusive country had conducted its sixth nuclear test.

The state-run Korean Central News Agency said the test, which took place at 1.30pm AEST, was carried out to “examine and confirm the accuracy and credibility” of its technology.

Several national geological agencies detected unusual seismic activity near the location of Pyongyang’s previous tests in the country’s north-east at around that time.

The United States Geological Survey detected an “explosion” with a magnitude of 6.3.

Japan concluded the tremors detected in North Korea were a nuclear explosion, marking the sixth atomic test by Pyongyang since 2006.

Tremors caused were at least 10 times as powerful as the last time Pyongyang exploded an atomic bomb a year ago, the Japan Meteorological Agency (JMA) said.

The Korea Meteorological Administration estimated that the nuclear blast yield of the presumed test was between 50 to 60 kilotons, or five to six times stronger than North Korea’s last test in September 2016.

As leaders around the world condemned the test, Mr Trump said on Twitter that North Korea’s “words and actions continue to be very hostile and dangerous to the United States”.

..North Korea is a rogue nation which has become a great threat and embarrassment to China, which is trying to help but with little success.

South Korea is finding, as I have told them, that their talk of appeasement with North Korea will not work, they only understand one thing!

Tensions on the Korean peninsula have been high since last month when North Korea threatened to launch missiles into the sea near the strategically located US Pacific territory of Guam after Mr Trump said Pyongyang would face “fire and fury” if it threatened the US.

The US President and Japanese Prime Minister Shinzo Abe spoke by phone and said that in the face of an “escalating” situation with North Korea that close co-operation between their countries and with South Korea was needed, Mr Abe told reporters.

“It is absolutely unacceptable if North Korea did force another nuclear test, and we must protest strongly,” he said.

Under third-generation leader Kim, North Korea has been pursuing a nuclear device small and light enough to fit on a long-range ballistic missile, without affecting its range and making it capable of surviving re-entry into the Earth’s atmosphere.

Earlier, the state-run Korean Central News Agency (KCNA) quoted Kim as saying his country can now produce “powerful nuclear weapons, as many as it wants”.

Kim inspected the loading of the “homemade” H-bomb into an ICBM’s nose cone during a visit to the North’s Nuclear Weapons Institute where the priority has been to build an arsenal of nuclear-tipped ICBMs able to strike the US mainland.

“[It] is a multi-functional thermonuclear nuke with great destructive power, which can be detonated even at high altitudes for super-powerful EMP [electromagnetic pulse] attack according to strategic goals,” KCNA said.

An EMP attack is one of the threats most feared by US strategists and defence leaders.

Such a bomb, detonated between 30 and 40 kilometres above the central US, would unleash a massive burst of high energy radiation to “fry” all unshielded solid-state electronics in the US between the Atlantic and Pacific, plus parts of Canada and Mexico.

Cars would stop in their tracks, the internet would go dark, modern communications technologies would be rendered useless and the national electricity grid left so damaged it would need to be re-built from scratch. Physicist Peter Vincent, executive director of the EMP Congressional Task Force, believes it would take decades for the US to recover – if it could recover at all.

– with AAP, ABC and wires