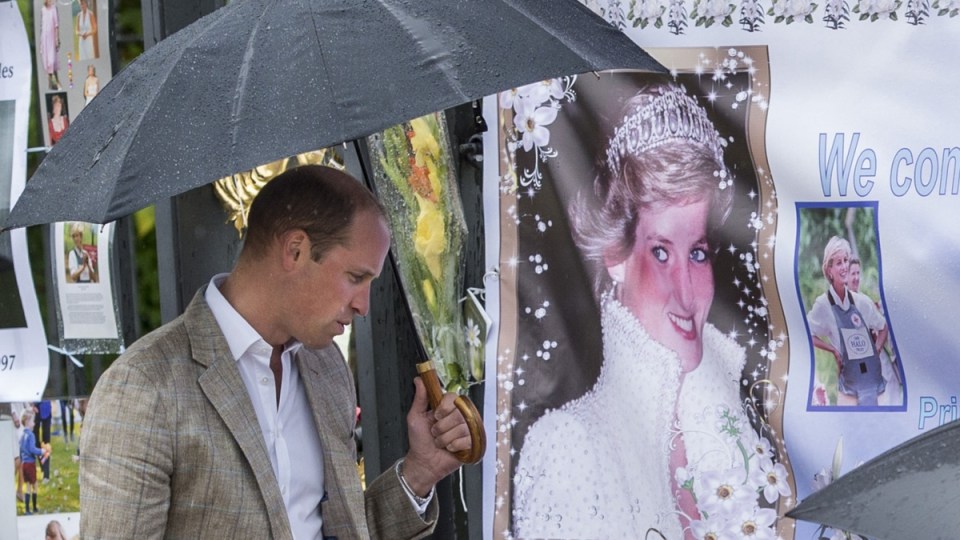 Princes William and Harry have made a point of viewing the floral tributes left at Kensington Palace's gates on the 20th anniversary of their mother death. Photo: Getty

The Duke of Cambridge and Prince Harry have stopped to view the heartfelt messages, pictures and flowers left for their mother Princess Diana at the gates of Kensington Palace.

The 20th anniversary of Diana’s death will be commemorated on Thursday and the royal brothers, with Kate, earlier visited the garden created in her memory in the grounds of the palace, her former home.

Charity chiefs from organisations associated with Diana met the royals after their tour and Harry told one group of campaigners about how his mother’s death was a tragedy for them as well as his family.

The royal brothers had spent an hour touring the temporary memorial White Garden with Kate before making the short journey to the gates, which is fast becoming a shrine to their mother.

Sheltering from the heavy rain under an umbrella William knelt down to look at some of the bouquets left in tribute to his mother, then pointed out a picture to his brother that appeared to make him laugh.

Harry came over to have a look at the picture which had left his older brother in stitches and William said: “Look at my shades.”

It was a photograph of William and his mother both wearing sunglasses as they sat in the crowds at an unknown event.

The royal siblings have talked candidly about the loss of their mother in a number of documentaries and interviews this year, and about the scenes they experienced when they came to see the tributes left at Kensington Palace a few days after their mother’s death.

William reminisced about that moment and took a few moments to point out to Harry how far back the flowers had stretched from the gate.

Pointing out where the sea of 1997 tributes had stretched to, he said: “Last time, it was all the way down.”

William and Harry’s appearance attracted several hundred well-wishers who lined crash barriers and the brothers each placed a floral tribute at the gates for fans of their mother.

Sisters Gracie,8, and Maisy Oxby, 10, from Essex handed over a bouquet of red blooms to Harry to place at the entrance on behalf of another royal fan.

Taking a bouquet from Carole Carter and her mother-in-law Eve, William heard how they had also been at Kensington Palace visiting the Diana fashion exhibition before they decided to join Wednesday’s commemorations.

The Duke thanked them for their flowers, and walked over to place them carefully at the main gates of Kensington Palace.

As they walked away, one woman shouted: “I’ve come from Australia. I love you, your mother, and your (William’s) children.”