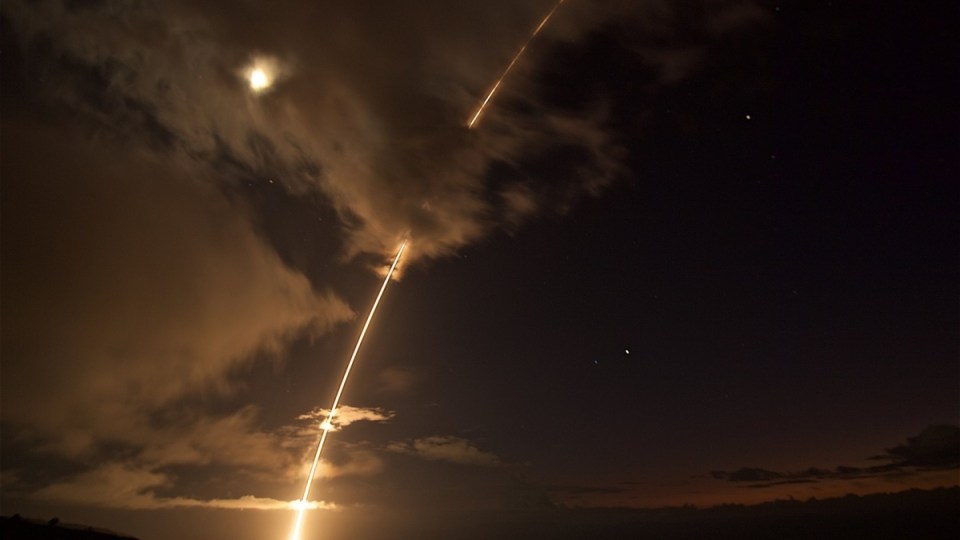 The US conducts its own missile test in the Pacific as a show of force to North Korea. Photo: Missile Defense Agency

President Donald Trump says “Talking is not the answer” to North Korea’s provocative nuclear program, as the US conducts own missile test in the Pacific.

In an angry tweet posted late Wednesday night, President Trump appeared to eschew diplomacy with Pyongyang, claiming the US has been paying North Korean what he called”extortion money” for decades.

“The US has been talking to North Korea, and paying them extortion money, for 25 years,” he said, adding: “Talking is not the answer!”

The U.S. has been talking to North Korea, and paying them extortion money, for 25 years. Talking is not the answer!

The tweet comes on the heels of the North’s recent missile test over Japan, a close American ally, and after Pyongyang warned that the US Pacific territory of Guam would be its next target.

It also comes as US officials announced that they had conducted a missile defence test that resulted in the successful intercept of a medium-range ballistic missile off the coast of Hawaii.

The test was conducted by the Missile Defense Agency (MDA) and US Navy sailors.

“We are working closely with the fleet to develop this important new capability, and this was a key milestone in giving our Aegis BMD ships an enhanced capability to defeat ballistic missiles in their terminal phase,” MDA director Lieutenant General Sam Greaves said in a statement.

“We will continue developing ballistic missile defence technologies to stay ahead of the threat as it evolves.”

President Trump’s angry tweet did not spell out what he meant by “extortion” in the current stand-off over North Korea’s nuclear program, and the White House did not immediately respond to questions.

North Korea has in the past temporarily halted nuclear development when the US and others provided food aid or other types of compensation.

But the North hasn’t been making such demands, at least publicly, since President Trump came into office. Instead, it has been focused on finishing its decades-long effort to master the technology for fitting a nuclear warhead on a missile that can strike the US mainland, calling such capability essential for its national defence.

The President’s assessment about the need for dialogue also appears at odds with his top diplomat, Secretary of State Rex Tillerson, who had in recent weeks been softening the conditions for a possible, formal dialogue with Pyongyang.

The US also has been maintaining a diplomatic back channel with North Korea. Trump offered a surprisingly subdued response to Pyongyang’s latest missile test on Tuesday, avoiding a repeat of his bombastic warnings earlier this month of a potential military confrontation.

Nonetheless, US officials announced on Wednesday morning that they had conducted a missile defence test that resulted in the successful intercept of a medium-range ballistic missile off the coast of Hawaii.

The United Nations on Wednesday condemned North Korea’s “outrageous” firing of a ballistic missile over Japan, demanding Pyongyang halt its weapons program, but holding back on any threat of new sanctions on the isolated regime.

North Korea said the launch of an intermediate-range ballistic missile (IRBM) was to counter US and South Korean military drills and was a first step in military action in the Pacific to “contain” the US territory of Guam.

The North’s leader Kim Jong-un ordered the launch to be conducted for the first time from its capital, Pyongyang, and said more exercises with the Pacific as the target were needed, the North’s KCNA news agency said on Wednesday.

“The current ballistic rocket launching drill like a real war is the first step of the military operation of the KPA ((The Korean People’s Army) in the Pacific and a meaningful prelude to containing Guam,” KCNA quoted Kim as saying.

Earlier this month, North Korea threatened to fire four missiles into the sea near Guam, home to a major US military presence, after President Donald Trump said the North would face “fire and fury” if it threatened the United States.