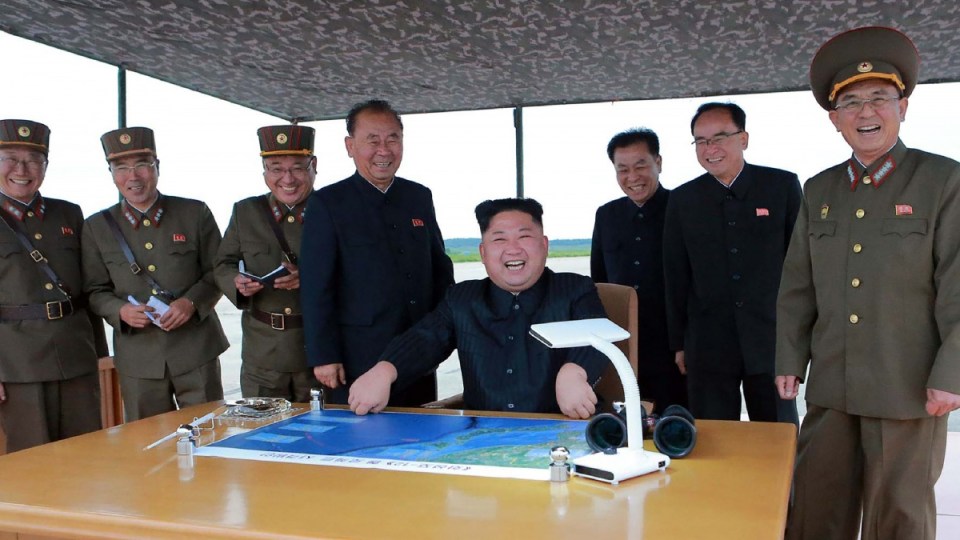 North Korean leader Kim Jong-un keeps upping the ante in his stand off with the world community. Photo: Getty

The United Nations has condemned North Korea’s “outrageous” firing of a ballistic missile over Japan, demanding Pyongyang halt its weapons program, but holding back on any threat of new sanctions on the isolated regime.

North Korea said the launch of an intermediate-range ballistic missile (IRBM) was to counter US and South Korean military drills and was a first step in military action in the Pacific to “contain” the US territory of Guam.

The North’s leader Kim Jong-un ordered the launch to be conducted for the first time from its capital, Pyongyang, and said more exercises with the Pacific as the target were needed, the North’s KCNA news agency said on Wednesday.

“The current ballistic rocket launching drill like a real war is the first step of the military operation of the KPA in the Pacific and a meaningful prelude to containing Guam,” KCNA quoted Kim as saying. (The Korean People’s Army or KPA is the North’s military.)

Earlier this month, North Korea threatened to fire four missiles into the sea near Guam, home to a major US military presence, after President Donald Trump said the North would face “fire and fury” if it threatened the United States.

In a statement the 15-member Security Council said it was of “vital importance” that North Korea take immediate, concrete actions to reduce tensions and called on all states to implement UN sanctions on Pyongyang.

However, the US-drafted statement, which was agreed by consensus, does not threaten new sanctions on North Korea.

China and Russia’s ambassadors to the United Nations said they opposed any unilateral sanctions on North Korea and reiterated calls to halt deployment of a US missile defence system in South Korea.

Speaking in Beijing, Chinese Foreign Minister Wang Yi said China is currently discussing the situation with other Security Council members and will make a “necessary response” based on the consensus reached.

Tuesday’s test was of the same Hwasong-12 missile Kim had threatened to use on Guam, but the test flight took it in another direction, over northern Japan’s Hokkaido and into the sea.

Mr Trump, who has vowed not to let North Korea develop nuclear missiles that can hit the mainland United States, said the world had received North Korea’s latest message “loud and clear”.

“Threatening and destabilising actions only increase the North Korean regime’s isolation in the region and among all nations of the world. All options are on the table,” Mr Trump said in a statement on Tuesday.

The North’s latest test launch came as US and South Korean forces conducted annual military exercises on the Korean peninsula, angering Pyongyang which sees the war games as a preparation for invasion.

Kim Dong-yup, professor at the Institute for Far East Studies of Kyungnam University in Seoul said firing the missile from a densely populated area near Pyongyang and over Japan suggested North Korea was confident in the missile’s stability.

“I do not think North Korea factored in much military meaning behind yesterday’s missile launch, rather yesterday’s launch was all about North Korea being stubborn,” he said.

“At the same time, North Korea is hinting that there is room for negotiation if the US and South Korea ends the joint military exercises.”

The UN Security Council has condemned North Korea’s launch of a ballistic missile over Japan.