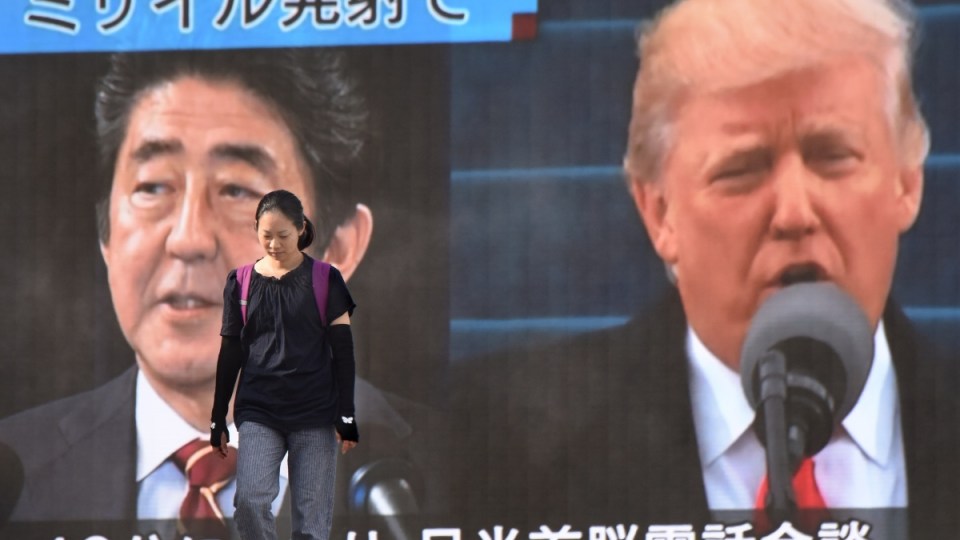 US President Donald Trump has warned North Korea “all options are on the table” in response to Pyongyang’s “unprecedented” firing of a ballistic missile over Japan.

The missile test on Tuesday came as US and South Korean forces conducted annual military exercises on the Korean peninsula, angering Pyongyang which sees the war games as a preparation for invasion.

North Korea has conducted dozens of missile tests under leader Kim Jong-un in defiance of UN sanctions, but this is believed to be the first ballistic missile fired over mainland Japan.

President Trump, who has vowed not to let North Korea develop nuclear missiles that can hit the US mainland, said the world had received North Korea’s latest message “loud and clear”.

“Threatening and destabilising actions only increase the North Korean regime’s isolation in the region and among all nations of the world. All options are on the table,” he said in a statement.

The North Korean missile was likely an intermediate-range ballistic missile (IRBM) and further analysis was underway to determine whether it was a success or failure, two US officials said.

US Ambassador to the United Nations Nikki Haley said the launch was “absolutely unacceptable and irresponsible” and that the Security Council now needed to take serious action.

“Australia condemns this latest reckless, dangerous and provocative act by the North Korean regime which continues to threaten the peace and stability of the region,” Mr Turnbull said in a video statement.

The Prime Minister again called on all nations to impose the harshest sanctions on Pyongyang, singling out China as the country with the most economic leverage.

“They have the ability to bring North Korea to its senses without military action,” he said.

Australia condemns the latest reckless and provocative act by the North Korean regime which threatens the peace and stability of the region. pic.twitter.com/a28TUE0CRU

“The US should know that it can neither browbeat the DPRK with any economic sanctions and military threats and blackmail nor make the DPRK flinch from the road chosen by itself,” North Korea’s official Rodong Sinmun said, using North’s official name, the Democratic People’s Republic of Korea.

The North vows to never give up its weapons programs, saying they are necessary to counter hostility from the United States and its allies.

In response to President Trump’s statement that all options are on the table, Russian Ambassador Vassily Nebenzia told reporters: “It’s troubling, because tensions are high and whose nerves are stronger, we don’t know.”

Diplomats say China and Russia typically only view a test of a long-range missile or a nuclear weapon as a trigger for further possible UN sanctions. Negotiations on the past three substantial UN sanctions resolutions have taken between one and three months.

In China, North Korea’s lone major ally, foreign ministry spokeswoman Hua Chunying said the crisis was “approaching a critical juncture”, but it might also be a turning point to open the door to peace talks.

‘All options on the table’ Donald Trump warns North Korea