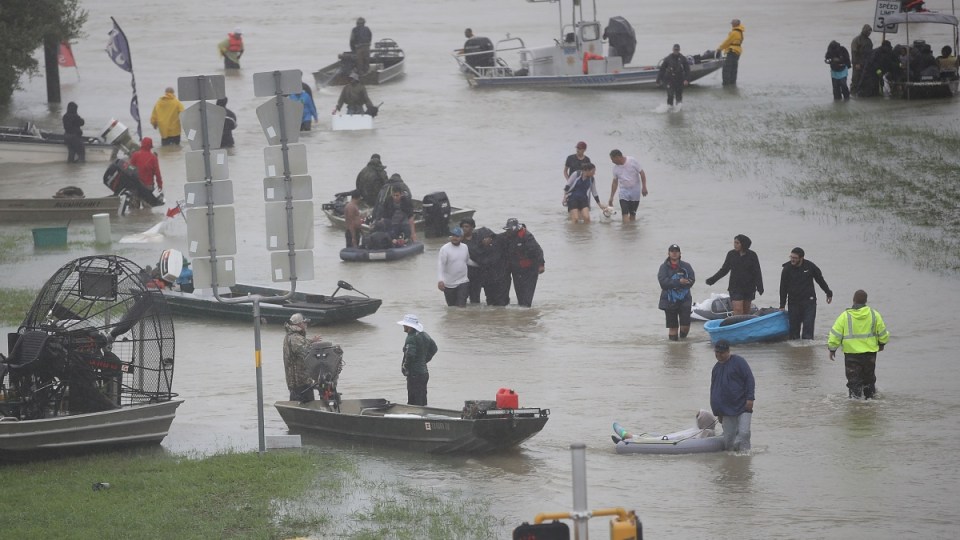 Some 30,000 people are expected to need shelter from the Houston floods. Photo: Getty

Rescuers are scrambling to reach Houston residents trapped in rising floodwaters as tragic reports emerge from the stricken city of 6.6-million people.

Authorities have rescued at least 2000 residents so far, according to the city’s Police Chief Art Acevedo.

At least 185 critical rescue requests were still pending on Tuesday night, with a goal is to rescue those people by the end of the day, Mr Acevedo said.

He said rescuers were giving priority to life-and-death situations, leaving many affected families to fend for themselves.

A TV station has reported that a family of six drowned northeast of Houston.

According to reporters for KHOU TV, the family was attempting to escape Topical Storm Harvey when their van flooded.

KHOU says the victims included four children aged 16 or younger and their great grandparents. The driver, the children’s great-uncle, was able to escape the van before it went under water.

Witnesses told KHOU that the van had just crossed a bridge in Greens Bayou when it hit the high water that swept it into the current.

The children’s great-uncle says he told the children to get out through the back door, but they didn’t make it.

While the official death toll from the flooding remains at seven people, the unofficial toll is as high as 11 with authorities expecting grim discoveries when the waters recede and the recovery effort begins.

This is how devastating the flooding in Houston has been to Interstate 10 pic.twitter.com/J1ZYFMUOI2

Water, meanwhile, has been released from Houston-area reservoirs  as authorities attempt to release pressure on two dams that are at risk of failing from the immense floodwaters filling the city.

The move aimed at protecting the downtown business district risked flooding thousands more homes, and the fourth-largest US city expected more rain after a chaotic weekend of rising water and rescues.

Some people used inflatable beach toys, rubber rafts and even air mattresses to get through the water to safety. Others waded while carrying trash bags stuffed with their belongings and small animals in picnic coolers.

Officials say 30,000 people are expected to be housed in emergency shelters as the flooding is expected to worsen in the coming days.

Tropical storm Harvey, which made landfall on Friday as a Category 4 hurricane and then lingered just off the coast as a drenching tropical storm, sent devastating floods pouring into Houston on Sunday.

The rising water forced a mass evacuation of parts of the city and overwhelmed rescuers who could not keep up with constant calls for help.

Residents living near the Addicks and Barker reservoirs – which were created to prevent flooding in downtown Houston – were warned on Sunday that a controlled release would cause additional street flooding that could spill into homes.

The convention centre was also used as a shelter for Katrina refugees in 2005. By Monday morning, 2600 people had taken shelter, half its capacity.

Parts of neighbouring Louisiana have started receiving heavy rain from Harvey, with Governor John Bel Edwards warning “the worst is yet to come”.

The National Weather Service predicted that the water could rise to 59 feet (18 meters), 3 feet (90 cm) above 2016 records and what County Judge Robert Herbert called an “800-year flood level”.

Harvey was the fiercest hurricane to hit the US in 13 years and the strongest to strike Texas since 1961’s Hurricane Carla, the most powerful Texas hurricane on record.