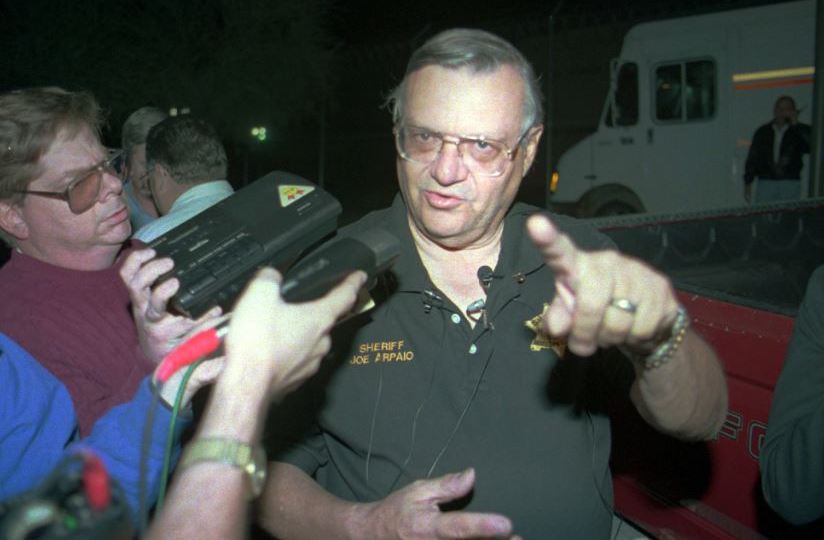 Sheriff Joe Arpaio tells reporters what he thinks of the US legal system after being convicted of ordering deputies to racially profile motorists.

President Donald Trump has pardoned former Arizona sheriff and political ally Joe Arpaio, less than a month after he was convicted of criminal contempt in a case involving his department’s racial profiling policy.

Trump had signaled this week that the first presidential pardon of his administration would go to Arpaio, aged 85, whom he has frequently praised for his hardline immigration stance.

“Throughout his time as sheriff, Arpaio continued his life’s work of protecting the public from the scourges of crime and illegal immigration,” said the White House statement announcing Arpaio’s pardon.

Reaction to the decision was sharp and swift, including among some fellow Republicans.

“Law-enforcement officials have a special responsibility to respect the rights of everyone in the United States,” House Speaker Paul Ryan in a statement. “We should not allow anyone to believe that responsibility is diminished by this pardon.”

Senator John McCain said: “The president has the authority to make this pardon, but doing so at this time undermines his claim for the respect of rule of law as Mr Arpaio has shown no remorse for his actions.”

Trump’s decision comes hot on the heels of the uproar after he claimed “both sides” were responsible for deadly violence during race-fuelled clashes this month in Charlottesville, Virginia.

Arpaio, who lost a bid for re-election in Arizona’s Maricopa County in November after 24 years in office, was known for his crackdown on undocumented immigrants and investigating unfounded Trump-supported claims questioning former President Barack Obama’s citizenship.

Before Trump granted the pardon, the American Civil Liberties Union, which sought the court injunction against Arpaio, said it would be “a presidential endorsement of racism.”

Arpaio, who campaigned for Trump in 2016, was convicted on July 31 by US District Judge Susan Bolton, who ruled he had willfully violated a 2011 injunction barring his officers from stopping and detaining Latino motorists solely on suspicion that they were in the country illegally.

Arpaio admitted to “inadvertently” disobeying the court order but said his behaviour did not meet a criminal standard, claiming the prosecution was a politically motivated attempt by the Obama administration to undermine his re-election bid.

Arpaio had been scheduled to be sentenced on October 5 and faced a fine and maximum sentence of six months in jail.

His controversial tenure as sheriff brought Arpaio national headlines for massive roundups of suspected illegal immigrants and for the way he ran the Maricopa County jail.

He reinstated chain gangs, made inmates wear uniforms that were pink or old-fashioned black and white stripes and forbade them coffee, salt and pepper.