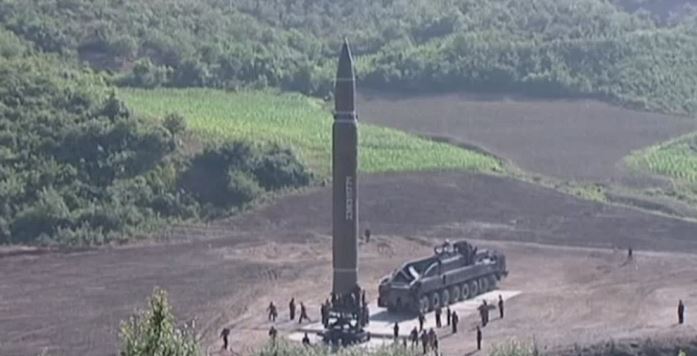 The attack plan could be finalised within a week and go to leader Kim Jong-un for approval. Photo: ABC

North Korea has detailed a plan to launch a volley of four ballistic missiles over Japan and toward the island of Guam.

A statement from General Kim Rak Gyom and published by state-run media on Thursday warned North Korea was preparing a plan to fire four of its Hwasong-12 missiles over Japan and into waters around the island, which is home to 7000 US military on two bases, and around 160,000 residents.

“The Hwasong-12 rockets to be launched by the KPA (Korean People’s Army) will cross the sky above Shimane, Hiroshima and Koichi Prefectures of Japan,” the report said, citing General Kim Rak Gyom,

The plan could be finalised within around a week and would go to leader Kim Jong-un for approval.

It would be up to Kim whether the move is actually carried out, the statement said.

The unusually detailed report on the attack plan on Thursday marked a further escalation in tensions between Pyongyang and Washington after US President Donald Trump warned North Korea earlier this week it would face “retaliation with fire and fury unlike any the world has seen before”.

“Sound dialogue is not possible with such a guy bereft of reason and only absolute force can work on him,” it said of Mr Trump, adding it would keep monitoring the speech and behaviour of the US.

Mr Trump poured fuel on the fire on Thursday [AEST] in renewing his threats and boasting that the US nuclear arsenal is “now more powerful than ever before”.

While he later noted that he hoped it would never be used, he also tweeted that “there will never be a time that we are not the most powerful nation in the world!”

It is unclear whether North Korea would risk firing missiles so close to US territory, which could provoke countermeasures and further escalation.

North Korea frequently uses extremely belligerent rhetoric with warnings of military action against adversaries, but it generally asserts it will not attack the United States unless it has been attacked first or has determined an attack is imminent.

But the latest statement raised worries amid a barrage of threats from both sides.

Following reports that US intelligence suggests the North might be able to pair a nuclear warhead with a missile capable of reaching targets on the United States mainland, Mr Trump warned North Korea that “it faces retaliation with fire and fury unlike any the world has seen before.”

Pyongyang, meanwhile, has been louder in its complaints against a new and tough round of sanctions imposed on it by the United Nations, with strong US backing, and Washington’s use of Guam as a staging ground for its stealth bombers, which could be used to attack North Korea and are a particularly sore point with the rulers in Pyongyang.

Even so, its reported plan to launch missiles toward Guam is extremely unusual.

If North Korea carried out such a launch – even if it aimed at hitting the waters off the island and not the island itself – it would clearly pose a potential threat to US territory and further complicate diplomatic or military responses.