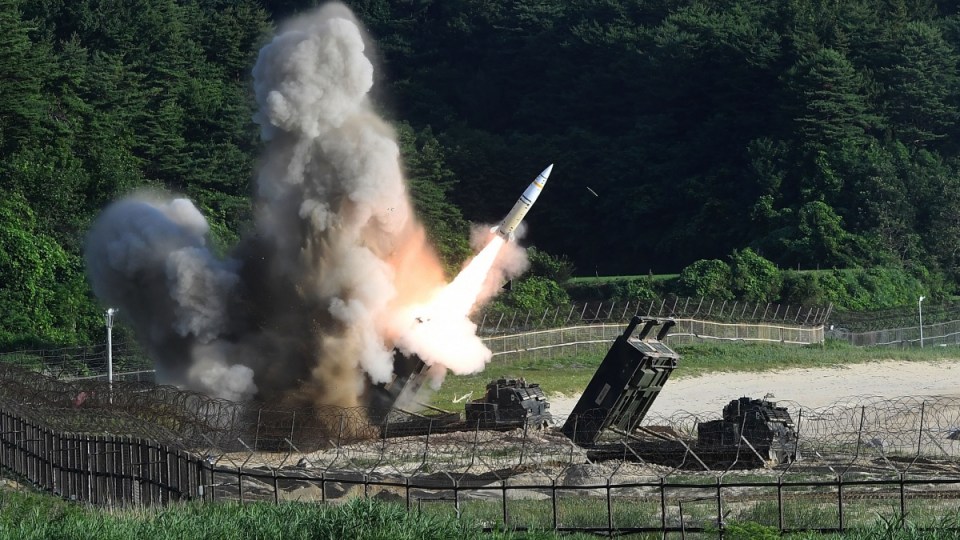 Donald Trump has boasted of his nuclear arsenal amid the dangerous stand-off with North Korea. Photo: Getty

With the Pacific Island of Guam in the firing line, President Donald Trump has inflamed the dangerous standoff with North Korea by boasting of America’s nuclear arsenal.

The war of words between the US and Pyongyang reached a tipping point Wednesday when President Trump’s warning of “fire and fury” against the burgeoning nuclear power was met with a threat to launch a missile strike on the US Pacific territory of Guam.

On Thursday, North Korean state-run media reported that a plan to launch four intermediate-range missiles at the US territory of Guam would be completed by mid-August before presenting it to leader Kim Jong-un.

Kim would then make a decision on whether to proceed with the strike, the report said.

The threats came amid reports that North Korea has devised a nuclear weapon capable of fitting inside its inter-continental ballistic missiles.

While the world urged diplomacy, President Trump renewed his threats Wednesday night by boasting that the US nuclear arsenal is “now more powerful than ever before”.

And while later adding that he hoped it would never be used, he asserted “there will never be a time that we are not the most powerful nation in the world!”

My first order as President was to renovate and modernize our nuclear arsenal. It is now far stronger and more powerful than ever before….

…Hopefully we will never have to use this power, but there will never be a time that we are not the most powerful nation in the world!

North Korea on Thursday said its proposed missile strike would fly over Japan on its way to Guam.

“The Hwasong-12 rockets to be launched by the KPA (Korean People’s Army) will cross the sky above Shimane, Hiroshima and Koichi prefectures of Japan,” the report said, citing General Kim Rak Gyom, commander of the Strategic Force of the KPA.

The report said President Trump’s “fire and fury” comments were a “load of nonsense”, saying only “absolute force can work on him”.

US Defence Secretary James Mattis earlier issued North Korea with a dramatic ultimatum, calling on Pyongyang to “cease any consideration of actions that would lead to the end of its regime and destruction of its people”.

“The DPRK must choose to stop isolating itself and stand down its pursuit of nuclear weapons,” Mr Mattis said in a written statement, adding that the “regime’s actions will continue to be grossly overmatched by ours and would lose any arms race or conflict it initiates.”

US Secretary of State Rex Tillerson, en route to the US from the ASEAN talks in Manila, was forced to dampen the rhetoric overnight as he sought to reassure the residents of Guam.

“What the President is doing is sending a strong message to North Korea in language that Kim Jong-un would understand, because he doesn’t seem to understand diplomatic language,” he said.

Mr Tillerson said Mr Trump wanted to make clear to North Korea that the US had the “unquestionable ability to defend itself” and would protect itself and its allies.

Stopping in Guam for to refuel, he said he was hopeful a global “pressure campaign” involving Russia and China could lead to dialogue with Pyongyang “about a different future”.

Guam is a key strategic military base for the US and is home to thousands of American service members and their families.

The Washington Post reported that the upgrade to America’s nuclear arsenal was a continuation of a directive by former president Barack Obama and still many years from completion.

But those are not expected to be deployed until well into the 2020s – in some cases, after a two-term President Trump would have left office, it cited defence analysts as saying.

Australian Foreign Minister Julie Bishop says Australia would not automatically be drawn into any war between North Korea and the United States.

“The United States is entitled to defend itself and its ally, but the strategy is to force North Korea, through diplomatic and economic means, to stop its illegal ballistic missiles and nuclear weapons programs,” she told the Channel Nine on Thursday.

Ms Bishop says Australia has been in “constant discussion” with the US over the issue, but it wouldn’t necessarily be drawn into conflict, should matters escalate that far.

“We were not a party, in the legal sense, to the (Korean War) armistice so there is no automatic trigger for Australia to be involved,” Ms Bishop told ABC radio.

“As far as the ANZUS alliance is concerned, that is an obligation to consult.”