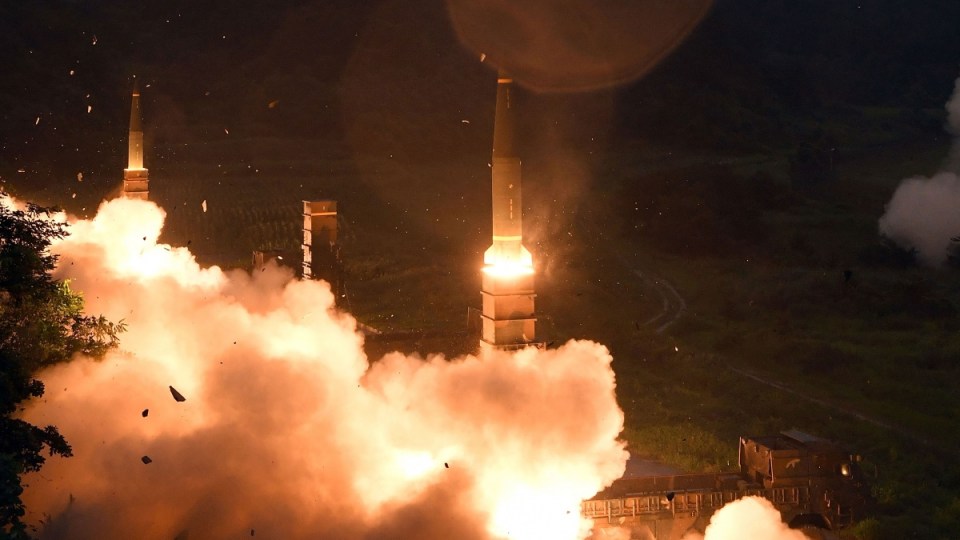 A North Korea missile takes to the skies. Photo: Getty

North Korea has accused the United States of attempting to drive the Korean Peninsula to “the brink of nuclear war” as Pyongyang angrily refuses to halt its missile program.

A defiant North Korea furiously responded to the UN decision to strengthen sanctions on its export revenues by attacking the US and its supporters on multiple fronts.

Foreign Minister Ri Yong-ho issued a statement at the Association of South-East Asian Nations (ASEAN) forum in Manila on Monday saying North Korea is ready to give the US a “severe lesson” with its strategic nuclear force if it takes military action against it.

Mr Ri described the new UN sanctions as being “fabricated”, adding: “We will under no circumstances put the nukes and ballistic rockets on (the) negotiating table.”

Early Tuesday morning, North Korea released a statement via its permanent mission to the United Nations calling the United States “frenzied” and “desperate.”

The statement said the US is “trying to drive the situation of the Korean peninsula to the brink of nuclear war, running amuck to conduct missile drill against the DPRK [North Korea] and deploying massive strategic equipment to the peninsula”.

At ASEAN, Mr Ri warned there would be “strong follow-up measures” and acts of justice, and said the resolution showed the United Nations had abused its authority.

“Neither shall we flinch even an inch from the road to bolstering up the nuclear forces chosen by ourselves unless the hostile policy and nuclear threat of the US against North Korea is fundamentally eliminated.”

Earlier North Korea said in a statement it would launch “thousands-fold” revenge against the US over the sanctions.

“There is no bigger mistake than the United States believing that its land is safe across the ocean,” it said.

The warnings come amid reports that the North and South Korean foreign ministers met briefly on Sunday night on the sidelines of the ASEAN summit.

The new UN Sanctions targeting mining and seafood exports, as well as banking and finance partnerships, are expect to cost North Korea a third of its US$3 billion (A$3.8 billion) revenue.

Wang Yi , foreign minister of Pyongyang’s closest ally China, told reporters on Monday that Beijing “100 per cent” committed to enforcing the latest round of UN sanctions.

US Secretary of State Rex Tillerson said it was hoped the sanctions would ultimately result in North Korea negotiating a cessation of its weapons program.

“…and when the conditions are right that we can sit and have a dialogue around the future of North Korea so that they feel secure and prosper economically,” Mr Tillerson told a media conference in Manila.

Mr Moon was also cited as saying there was a need to show North Korea dialogue is still open, should Pyongyang give up its nuclear program.

In a separate statement, the White House said the two leaders “affirmed that North Korea poses a grave and growing direct threat to the United States, South Korea, and Japan, as well as to most countries around the world”.”

The leaders committed to fully implement all relevant resolutions and to urge the international community to do so as well,” the White House said.

Trump tweeted that he was “very happy and impressed with 15-0 United Nations vote” on the sanctions.

North Korea has accused the US and South Korea of escalating tensions by conducting military drills.