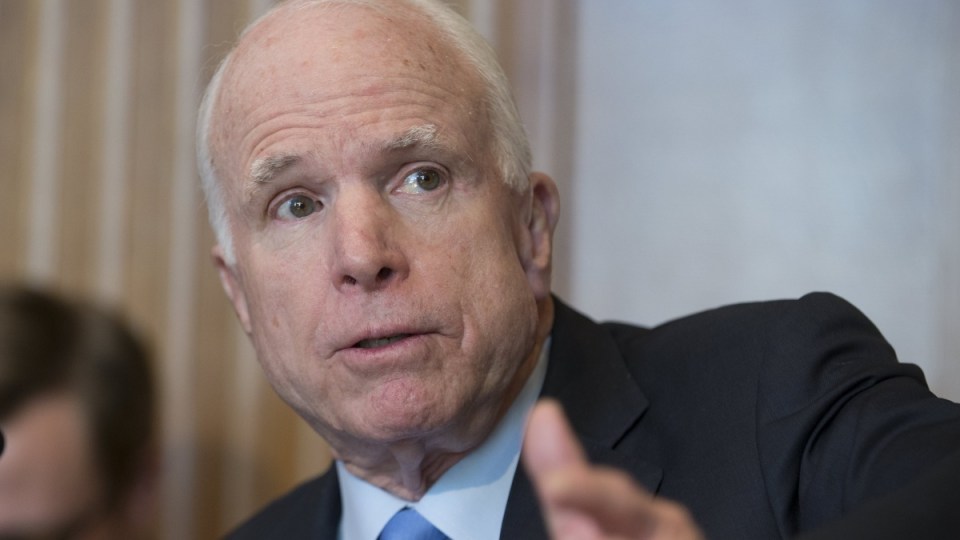 US Senator John McCain has revealed he a brain tumor. Photo: AAP

United States Senator and former presidential nominee John McCain has a brain tumour and is his reviewing treatment options.

The 80-year-old Republican has glioblastoma, an aggressive cancer, according to doctors at the Mayo Clinic in Phoenix.

The Arizona senator and his family are reviewing further treatment, including a combination of chemotherapy and radiation.

The five-year survival rate for glioblastoma patients over 55 is about four per cent.

Patients fare best when surgeons can cut out all the visible tumour, which happened with Senator McCain, according to his office.

However, cancerous cells that are not visible still tend to lurk, which is why Senator McCain’s doctors are considering treatment including chemotherapy and radiation.

Senator McCain has been recovering at home in Arizona since undergoing a procedure to remove a blood clot from above his left eye.

Tissue analysis since that procedure revealed that a primary brain tumour known as a glioblastoma was associated with the clot, his office said.

The chairman of the Senate armed services committee had been recovering at home and his absence forced Republican Majority Leader Mitch McConnell to delay action on healthcare legislation.

In a statement, Mr McConnell said: “John McCain is a hero to our conference and a hero to our country. He has never shied from a fight and I know that he will face this challenge with the same extraordinary courage that has characterised his life.”

McCain was the Republican presidential nominee in 2008, when he and running mate Sarah Palin lost to Barack Obama.

He lost the Republican nomination to George W Bush in 2000.

John McCain is an American hero & one of the bravest fighters I've ever known. Cancer doesn't know what it's up against. Give it hell, John.

John McCain is as tough as they come. Thinking of John, Cindy, their wonderful children, & their whole family tonight.

A navy pilot, he was shot down over Vietnam and held as a prisoner for five years.

Doctors say Senator McCain is recovering from his surgery very well and his underlying health is excellent.

In a statement on Twitter, his daughter, Meghan McCain, said: “My love for my father is boundless and like any daughter I cannot and do not wish to be in a world without him. I have faith that those days remain far away.”