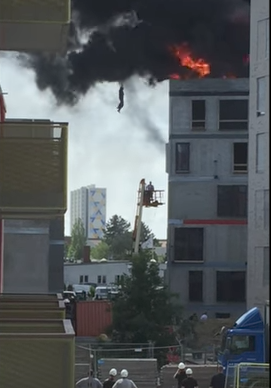 A roofer has been lowered to safety from a burning building by grabbing onto a crane hook Photo: YouTube / Rodovre Lokal Nyt

A tradesman has sensationally escaped a burning building by grabbing onto a crane hook and leaping off.

The man was lowered to safety and, remarkably, escaped relatively unharmed.

The blaze broke out about 12.30pm (local time) last Thursday and trapped the man at a construction site in the Danish city of Irmabyen.

Construction workers on the ground were first prompted into action when they heard the voice of a man yelling.

And once they determined it was coming from the roof, quick-thinking crane operator John Pederson – who was reportedly working on a nearby building site – hatched a plan to save a life.

“I was sitting in the crane and then suddenly there was black smoke everywhere,” he told local media outlet TV2.

“I jumped out of the crane to see what had happened and then I heard someone shouting that a man was standing on the roof, which was caught in the flames.

“I just thought that he was going down. Otherwise he would burn up and the crane was the only tool we just had at hand.”

The man, who was shielding himself from the flames with a piece of wood, watched on as Pederson swung the crane arm towards him.

The trapped worker then managed to grab hold and jumped off the roof.

He almost swung into the burning building but was safely lowered to the ground, before receiving medical attention.

“It was fortunate that we succeeded, because I was afraid that he had burned his fingers and could not hold on,” Mr Pederson added.

“Then [if his fingers had burned], I would lose him. But what was the alternative?”

Eyewitness Martin Mielko said he thought the man would die.

“Quite frankly, I did not believe that he would survive. He was one minute from dying,” he said.

Sensational video of the rescue was shared by newspaper Rodovre Lokal Nyt on their YouTube channel.

Locals reported seeing the 10-metre tall smoke from kilometres away.

According to reports, police said two workers went to hospital for burns to their hands and face.