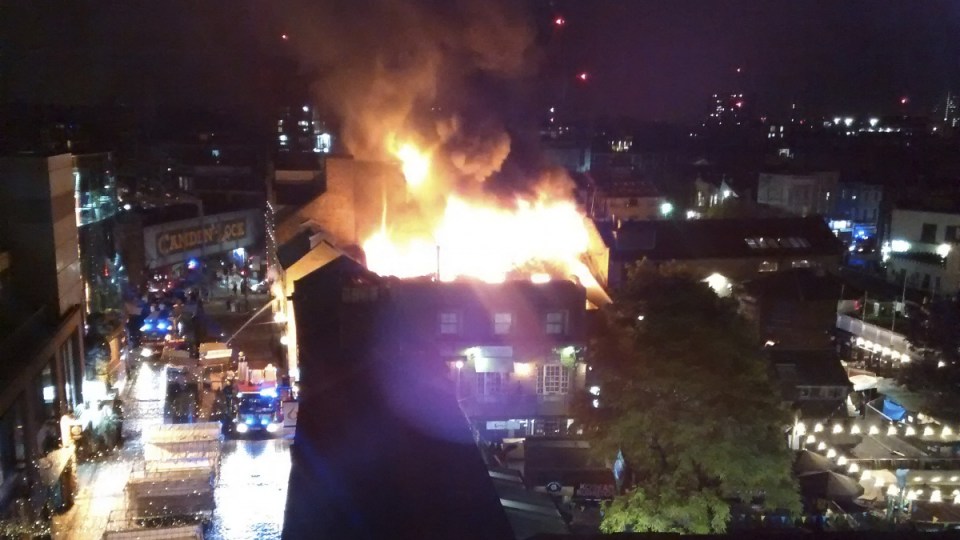 Around 70 firefighters were fighting the blaze at its height. Photo: AP Photo via AAP

A large fire has broken out in London’s popular Camden Lock Market with no injuries yet reported.

Eight fire engines and about 60 firefighters were initially called to fight the fire, shortly before midnight Sunday (local time), according to the London Fire Brigade said.

But, the brigade soon upped resources, with 10 fire units and 70 firefighters fighting the fire at its height.

Pictures on social media showed the fire was well alight with the flames towering high above surrounding buildings, however, as of 10.30am AEST, London’s Metropolitan Police confirmed there had been no reports of injuries.

“Police were called on Monday at 12.10am to Camden Lock Market to reports of a fire. London Fire Brigade were already at the scene when officers arrived. It is unknown at this stage if any persons are injured, we await update,” the spokeswoman said.

One person tweeted: “On a night bus I just passed the start of a big fire in Camden, now at Euston I’ve seen lots of ambulances head north.”

Another tweeted: “Just drove past Camden market and there’s a huge fire on top a building, close to the Loch Bridge! Crazy crazy scenes.”

A major blaze devastated the area in 2008, shutting the attraction for several months.

The markets are a popular attraction, open every day and housing more than 1000 sellers, street food traders and independent stores.