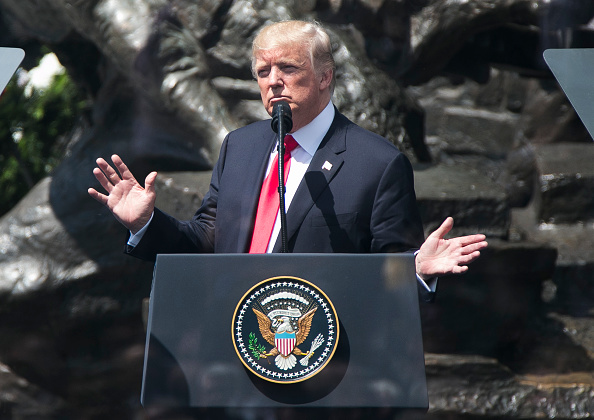 President Donald Trump has vowed to confront North Korea “very strongly” following its latest missile test and has urged nations to show Pyongyang there would be consequences for its weapons program.

North Korea on Tuesday test-launched an intercontinental ballistic missile that some experts believe has the range to reach the US states of Alaska and Hawaii and perhaps the US Pacific Northwest.

North Korea said it could carry a large nuclear warhead.

Speaking at a news conference with Polish President Andrzej Duda on Thursday, Trump said Korea was “a threat, and we will confront it very strongly”.

He said the United States was considering “severe things” for North Korea, but that he would not draw a “red line” of the kind that his Democratic predecessor, Barack Obama, had drawn but not enforced on the use of chemical weapons in Syria.

“They are behaving in a very, very dangerous manner and something will have to be done,” Trump said.

The issue presents the president, who took office in January, with perhaps his biggest foreign policy challenge.

It has put pressure on his relationship with Chinese President Xi Jinping, whom Trump had pressed without success to rein in Pyongyang.

The United States said on Wednesday that it was ready to use force if necessary to stop North Korea’s nuclear missile program.

But China on Thursday called for restraint and made clear it did not want to be targeted by US sanctions.

Meeting in Germany ahead of a G20 summit, Xi told South Korean President Moon Jae-in that “China upholds the denuclearisation of the peninsula, maintaining its peace and stability, resolving the issue via dialogue and consultation, and that all sides strictly abide by relevant resolutions of the UN Security Council”, according to the Chinese Foreign Ministry.

And Chinese Vice Finance Minister Zhu Guangyao said that, while China would implement relevant UN resolutions, “the US should not use their domestic laws as excuses to levy sanctions against Chinese financial institutions”.

Trump flew on to Hamburg on Thursday to attend the summit, and was due to meet with Xi there.

His frustration that Beijing has not done more to clamp down on North Korea prompted him to tweet on Wednesday: “Trade between China and North Korea grew almost 40% in the first quarter. So much for China working with us – but we had to give it a try!”

US Ambassador to the United Nations Nikki Haley told the UN Security Council on Wednesday that the US would propose new UN sanctions in coming days, and if Russia and China did not support the move, then “we will go our own path”.