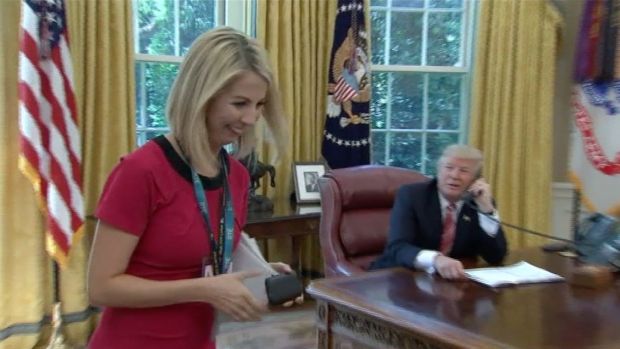 “We have a lot of your Irish press watching us right now,” he told Mr Varadkar over the phone, before addressing Ms Perry directly.

“And where are you from? Come here. We have all of this beautiful Irish press.

“She has a nice smile on her face so I bet she treats you well.”

Ms Perry later shared a video of her “bizarre” unexpected personal encounter with the president on Twitter and recounted the incident to her news organisation RTE.

Video of the bizarre moment when President @realDonaldTrump called me over during his call with Taoiseach @campaignforLeo Varadkar. @rtenews pic.twitter.com/TMl2SFQaji

“One minute we were outside the window and the next minute I’m meeting the President of The United States,” Ms Perry told RTÉ.

“Usually we would shoot from outside the window of the White House and that’s what we were expecting today, but instead we were invited inside to witness the President’s call to the Taoiseach.

“When we went in he was already on the phone but I managed to catch his eye and he called me over.”

Some took to social media to mock the President, while others defended Mr Trump’s comments as having been a harmless compliment.

Hollywood-based British television presenter Caroline Feraday said: “It was utterly inappropriate in the workplace. They weren’t on a date. You could see she was uncomfortable; he relishes this power.”

you're so immature to think that saying that someone has a nice smile is creepy, it's literally just a compliment. What's wrong with that?

Reporters said Mr Varadkar kept Mr Trump waiting about 90 seconds before answering the phone call, which is understood to have lasted 10 to 15 minutes.

He was invited to the White House next year for St Patrick’s Day festivities. No presidential visit to Ireland was discussed during the conversation.

“We have so many people from Ireland in this country — I know so many of them, I feel I know all of them,” Mr Trump said, according to the BBC.

“But I just wanted to congratulate you, that was a great victory that you had.”

Irish reporter singled out by Donald Trump for ‘nice smile’