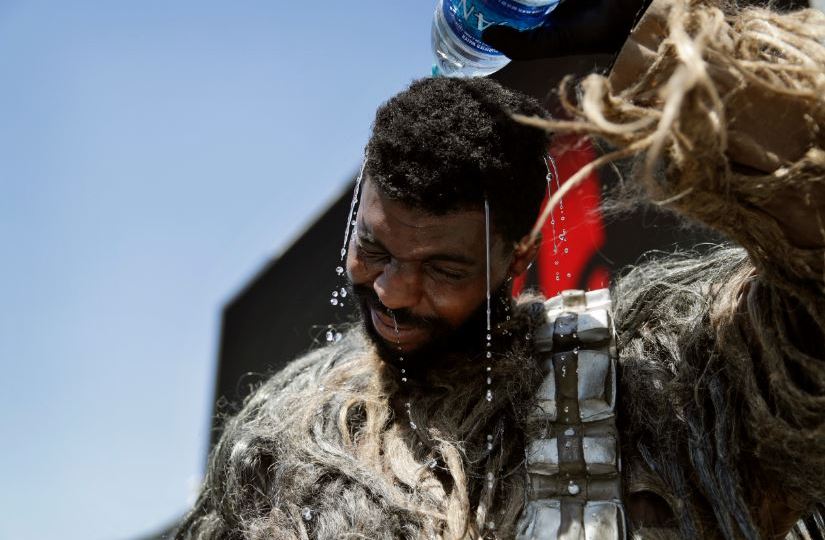 Xaviere Coleman takes a wet break from posing for tourists in his Wookie suit on the Las Vegas Strip. AP/John Locher

Tourists abandoned the normally bustling Las Vegas Strip to seek refuge inside air-conditioned hotels and casinos as the town that likes to call itself Sin City endured temperatures from hell and airlines cancelled flights out of the gambling mecca.

At midnight on Tuesday (US time), the temperature still stood at a near-unbearable 35 degrees and the normally bustling Strip looked like the main street of a ghost town.

Major airlines delayed and cancelled flights out of Las Vegas and Phoenix airports as temperatures hit the high 40s, citing difficulty in operating aircraft in extreme heat – causing plenty of headaches for airlines and travellers alike.

American Airlines cancelled 20 regional flights out of Phoenix, Arizona on Tuesday after temperatures in the desert city soared toward 49 degrees Celsius.

The only popular spots were under water sprays and misters outside some of the big casinos, The Los Angeles Times reported.

Tourists complained there was no relief to be found in the hotels’ swimming pools, where the water had been heated so much one visitor complained “it was barely refreshing”.

At the Flamingo Casino, hotel animal handlers were poised to bring inside the iconic pink birds that normally wander the grounds.

Meanwhile, in neighbouring towns and adjoining states, the extreme heatwave shattered records, strained power grids and brought warnings from public officials not to venture outside unless absolutely necessary.

The forecast called for a high of 49 degrees Celsius in Phoenix, 48C in Palm Springs, California, and 52C in Death Valley — a desert valley in Eastern California.

Aviation experts explained that hotter air was also thinner, causing a decline in performance for jet engines, especially during take-offs.

“As the ambient temperature at a particular airport increases, in this case into the [high 40s] at Phoenix, the amount of lift and power in aircraft engines declines, and the result is that for any given runway length, you can carry less and less payload,” said Robert Mann, an industry analyst and former airline executive.

“As temperatures get that extreme, you have to offload so much fuel or passengers or cargo that it no longer makes sense to fly,” he said.

ABC News Breakfast weatherman Nate Byrne explained: “When the temperatures get that hot, the air is literally just not dense enough to make sure that all of the physics that works to help an aircraft get into the air are enough for it to do that safely.”

Las Vegas hit 47.2 degrees late Tuesday afternoon, tying an official record that has been reached only three times in the city’s history, the first in 1937 and the most recent four years ago.

The unofficial record is 47.8, set in July, 1938, but that reading is dismissed by modern meteorologists as an unreliable amateur observation.

Mr Mann said aircraft may also be hampered because the charts used in flight manuals to calculate aircraft performance are not written with such heat in mind, making it impossible for pilots to accurately calculate payloads and take-off speeds.

The flights affected by the heat tend to be on smaller regional carriers, which use planes that operate under lower maximum temperatures.

“There’s a point at which either runway length is insufficient or the speed is so high that the tires wouldn’t be rated for it,” Mr Mann said of those aircraft.

The heat can also create issues for ground crews, where pavement temperatures can reach more 66C, life-threatening conditions if workers are exposed to it for too long.

The main burn centre in Phoenix warned people to be careful around car interiors and pavement and with their pets.

People in Phoenix were taking advantage of free elastic booties to put on their pets’ paws so they did not burn on concrete and pavement.

Shelby Barnes, 48, picked up three sets of the booties for her dogs. She said she would yell at people who walked their dogs without them in the afternoon heat.

“If you can’t put your foot on the sidewalk, neither can they,” she said.

The torrid weather comes as new research found that nearly a third of the world’s population experience 20 days a year when the heat reaches deadly levels.

The study of nearly 2000 deadly heat waves worldwide since 1980 was published Monday in the journal Nature Climate Change, a monthly peer-reviewed journal.