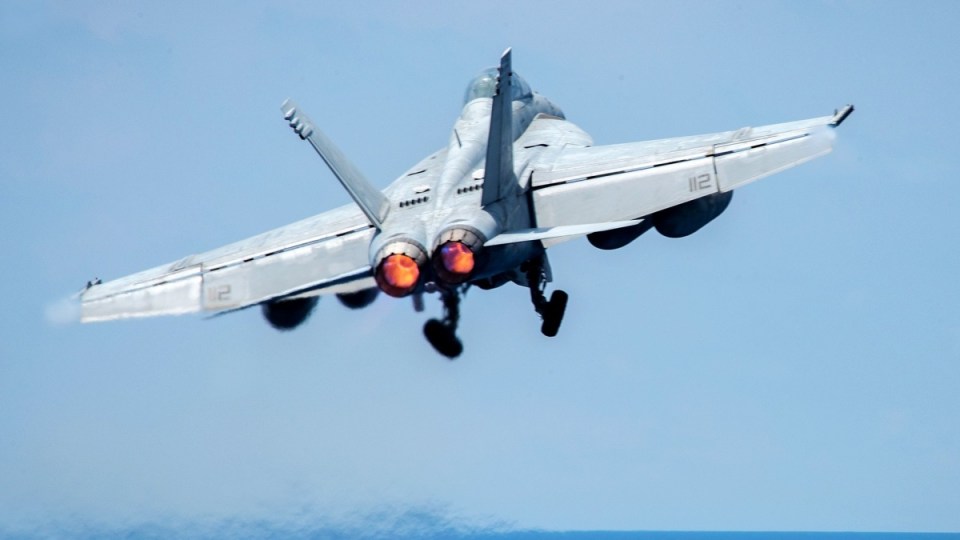 According to the Pentagon a US Navy F/A-18 shot down a Syrian government fighter jet on 18 June, 2017. Photo: AP

The US-led coalition in the Middle East is looking shaky after Australia suspended all air operations over Syria in the face of Russian threats and an escalation of tensions in the region.

The Defence Department issued a statement Tuesday saying ADF air operations had been suspended as a “precautionary measure”.

It comes after Russia threatened to target coalition warplanes in retaliation for the US downing a Syrian government jet, and as a US jet on Wednesday morning (AEST) downed a pro-Syrian regime drone in the country’s southeast.

“ADF force protection is regularly reviewed in response to a range of potential threats,” the Defence statement said. “ADF personnel are closely monitoring the air situation in Syria and a decision on the resumption of ADF air operations in Syria will be made in due course.

“ADF operations in Iraq will continue as part of the coalition.”

“This is not the time for the coalition to be in disarray,” Dr Khatib was quoted as saying.

US forces Wednesday morning said a US jet shot down an Iranian-made drone operated by Syrian government forces near Tanf, an outpost of the US-led coalition..

The drone was thought to be armed and threatening US-led coalition troops on the ground, officials said.

It also comes as the US military announced officially that coalition forces had killed the Islamic State’s top cleric, Turki al-Binali, in an air strike in Syria last month.

On Sunday, the US shot down a Syrian warplane for the first time, prompting Russia to issue a threat to coalition aircraft flying west of the River Euphrates, saying they “will be considered air targets”.

The Russian Ministry of Defence called the downing of the plane “a cynical violation of the sovereignty of the Syrian Arab Republic” and “military aggression.”

Russia also stopped using a key “de-confliction” communication channel set up to avoid conflict between US and Russian forces in Syria.

“Australia is worried about the suspension of the de-confliction line between Russia and the United States as a result of the downing of the Syrian jet,” said Dr Khatib told CNN.

“This could expose Australia to the risk of potentially clashing with Russian aircraft inadvertently.

“This is a risk that I am sure other countries participating in the international coalition share. Australia’s protective measure of suspending its activities is likely to cause wider concern among the other participants in this campaign.

“The US position militarily is weaker and any sign of a lack of unity within the international anti-ISIS coalition can only be good news for Russia and the Syrian regime.”

The UK, another key coalition ally, said it would continue to take part in air operations despite Russia’s warning.

Australia’s suspension of Syrian operations a ‘blow’ to the US