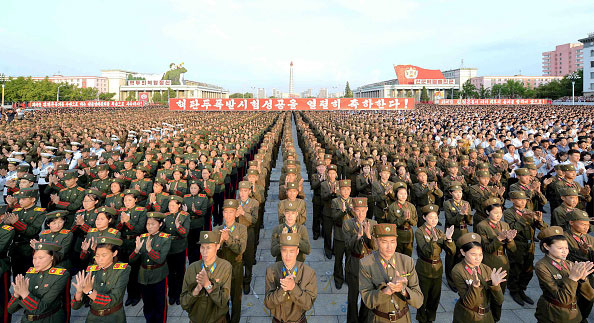 North Korea says its diplomats were 'mugged' by officials at a New York airport. Photo: Getty

North Korea has accused US officials of “literally mugging” its diplomats at New York’s Kennedy International Airport before making off with a diplomatic package.

A North Korean foreign ministry spokesman told state news agency KCNA that its officials had been “robbed”, branding the US a “lawless gangster state”.

The North Korean diplomats were reportedly returning from a UN conference on disability rights when the incident – described by KCNA as an “illegal and heinous act of provocation” occurred.

The foreign ministry spokesman told KCNA the diplomats were “on standby” at their boarding gate when the confrontation took place, leading them to believe the forcible confiscation was “planned.”

Neither the White House nor the Department of Homeland Security have commented on the claims.

“The U.S. should reflect on its reckless act and be fully aware of the grave consequences to follow,” the spokesman told KCNA.

The spokesman, who was not named as per usual KCNA practice, said North Korea “regards this mugging by the US as an intolerable act of infringement upon the sovereignty” of its country, and demanded an explanation and an apology.

KCNA also called into question the suitability of New York as the home of the UN.

“The international community needs to seriously reconsider whether or not New York, where such an outrageous mugging is rampant, is fit to serve as the venue for international meetings,” KCNA said.

The alleged airport incident marks the latest event in an increasingly strained relationship between the US and North Korea.

Amid a war of words between Pyongyang and the White House, North Korea has escalated its missile program as it looks to make good on its vow to produce a weapon capable of reaching the US mainland.

Continuing military cooperation with South Korea has angered the North, leading to warnings of nuclear war.

Last week, North Korea returned US university student Otto Warmbier to his family in a coma, more than a year after he was sentenced to 15 years’ hard labour for stealing a propaganda item.

North Korea claimed Mr Warmbier’s coma was caused by botulism contracted after his trial last year and a sleeping pill given to him as treatment.

US doctors have disputed the claim, saying no traces of botulism were found in Mr Wambier’s body, and he exhibited extensive evidence of brain trauma.

“Even if you believe their explanation of botulism and a sleeping pill causing the coma – and we don’t – there’s no excuse for a civilised nation to have kept his condition secret and to have denied him top notch medical care,” Mr Warmbier’s father, Fred, said last week.