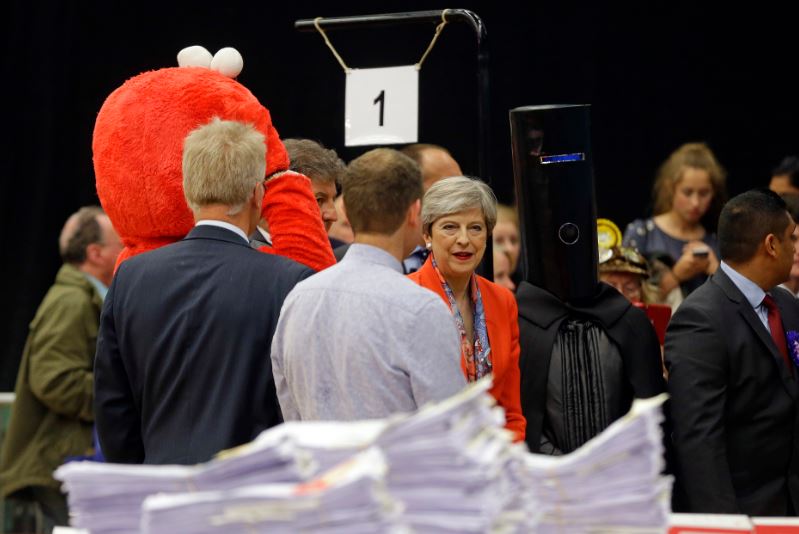 Who's the muppet? Theresa May awaits the tally with two of the joke candidates - Elmo and the black-clad Lord Buckethead. Photo: AP/Alastair Grant

Politics makes for strange bedfellows – and desperate politics the strangest partners of all.

Just ask humbled UK Prime Minister Theresa May – prime minister for the moment, that is – who last night (AEST) secured the support of Northern Ireland’s Democratic Unionist Party to get the numbers she needs to form a government.

Added to the Conservatives’ tally of 318 seats won or retained, the DUP’s 10 elected members lift the May government above the crucial 326 votes required to achieve a majority in the House of Commons.

And what of the dowry Ms May is paying to secure this marriage of convenience?

As yet no one is being specific, with no firm indications if the DUP will enter a formal coalition and be rewarded with a cabinet post or two, or if it has simply agreed not to block budget bills and support the government in a less formal sense.

The latter seemed more likely as shaken Conservatives contemplated their party’s future in the cold light of day.

What is known is that the DUP is a hard-line party representing narrow Protestant interests and detested by many Northern Irish Catholics, who backed Sinn Fein’s separatist candidates to victory in seven seats.

The DUP was the political vehicle of the late firebrand Protestant preacher Ian Paisley, so there is a very real possibility its inclusion one way or another on the government benches will aggravate “the troubles”. It certainly won’t do anything to calm them.

More than that, the DUP is rigidly hard-right conservative, vehemently opposing same-sex marriage, dismissing climate change as a hoax and opposing abortion – all views that will sit uneasily with progressive Conservatives.

But that is the only thing certain as Britain absorbs the astonishing change in fortunes that a mere month ago saw pundits, observers and pollsters agree without dissent that the Conservative leader was destined to romp home.

By some estimates her decision to call a snap election three years ahead of schedule was a masterstroke. Labor was divided, the pundits said, and leader Jeremy Corbyn a hard-left radical who enjoyed the staunch backing of grassroots supporters but could not unite his deeply divided parliamentary wing.

Instead, Ms May is now circled by sharks and Corbyn could not be more secure.

And now, to cap off a woeful campaign and a resounding slap at the ballot box, comes the alliance with the Orangemen of the DUP.

As one commentator told Sky News UK, “The rule has always been that you don’t make common cause with the Ulstermen.”

A rule now broken – and a huge irony as well.

Northern Ireland voted overwhelmingly against leaving Europe in last year’s Brexit vote, meaning that May – who also opposed Brexit but has now pledged to see it through – depends for her government’s survival on its sworn foes.

But that will depend if she will indeed survive and the omens aren’t good, with bookmakers making Foreign Secretary Boris Johnson the runaway favourite to take up the lease on 10 Downing Street sooner rather than later.

Even before the votes were tallied in the last seats to report, members of her party were speaking publicly of Ms May’s “untenable leadership position”, blaming her for the loss of the Conservatives’ comfortable majority.

Conservatives will not caucus until next week, by which time Ms May will have visited Buckingham Palace and attended to the formality of obtaining royal permission to form a government.

With tousle-haired, outspoken and politically incorrect Foreign Secretary Boris Johnson waiting in the wings, Westminister observers are predicting his bid for the leadership will solidify from the fog of chaos and confusion that has settled over shell-shocked Conservatives.

Asked directly at his victory party in the seat of Uxbridge if Ms May should retain the leadership, Johnson would say only, “It’s early days yet.” He was smiling as he said it.

The election is over – but the upheavals, it seems, are not.