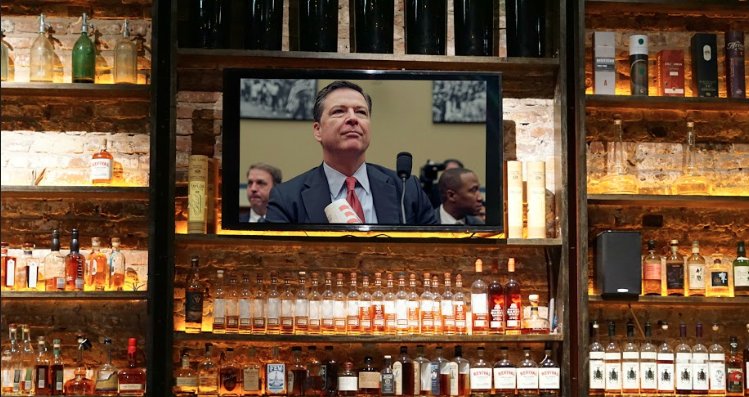 Television “watch parties”, typically hosted for sporting events and awards shows, are planned at homes and bars across the US for Mr Comey’s appearance at midnight (AEST) Thursday before the Senate Intelligence Committee.

During “the SUPER BOWL of Washington,” as it was billed by the Axelrad Beer Garden in Houston, the former director will testify that US President Donald Trump tried pressure him to scale back the agency’s investigation into Russia’s alleged interference in the 2016 US presidential election.

“Join us for an early morning beer and engage in friendly debate with fellow patrons,” a post on the Axelrad Facebook page said. The bar also is serving a drinks called the ‘impeachmint’ and ‘bad hombre’.

In Washington, Shaw’s Tavern was one of several bars promising to open its doors early ahead of the Mr Comey’s testimoney, with a $10 “FBI” breakfast special.

In this case, FBI stands not for Federal Bureau of Investigation but French toast, bacon and ice cream.

“Grab your friends, grab a drink and let’s COVFEFE!” the tavern said on Facebook, referring to a truncated Trump tweet last week with that word that left some people scratching their heads.

Thursday we are opening early for our Comey Hearing Covfefe! pic.twitter.com/o7o2XsFzl2

The Partisan Bar just off Washington’s tourist-rich National Mall will offer “The Last Word” and “Drop the Bomb” cocktails, as well as  “The Patriot” breakfast sandwich.

“We’ve got two TVs in our bar and we’re going to have the audio on full blast,” said Molly Hippolitus, a spokeswoman for the bar’s owners. “I’m expecting a pretty good mix, a bipartisan crowd to show up.”

The Union Pub in Washington planned to buy patrons a round of drinks every time President Trump, a frequent tweeter, makes a post on Twitter during Mr Comey’s testimony.

US bars gear up for Comey testimony ‘Super Bowl of Washington’