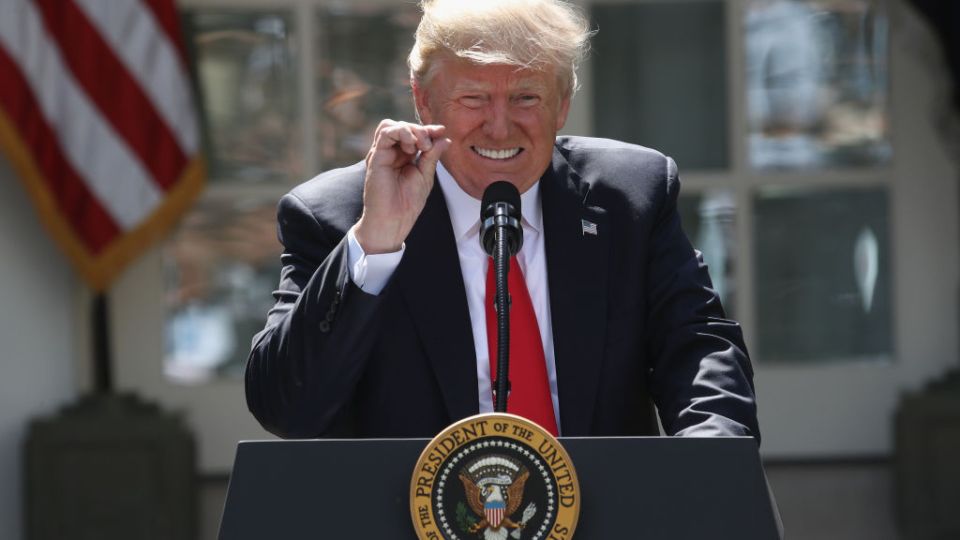 “I was elected to represent the citizens of Pittsburgh, not Paris." Photo: Getty

World leaders have condemned President Donald Trump’s decision to withdraw from the Paris climate change accord.

In a televised address from the Élysée palace in English and French – unprecedented for a French president in a home address – Mr Macron said while he respected Mr Trump’s decision, it was a “mistake both for the US and for our planet”, and channeled Mr Trump himself in one of his criticisms.

“Wherever we live, whoever we are, we all share the same responsibility: make our planet great again,” Mr Macron said.

Former president Barack Obama released a statement saying the decision placed the US among “a small handful of nations that reject the future”, but hoped that the crusade to reduce greenhouse gas emissions would continue to be waged by others.

“I’m confident that our states, cities, and businesses will step up and do even more to lead the way and help protect for future generations the one planet we’ve got,” Mr Obama said.

In an address early Friday (AEST), Mr Trump said he was fulfilling his “duty to protect America and its citizens” and suggested the US could renegotiate terms to re-enter either the accord or forge “an entirely new transaction under terms that are fair to the United States”.

“We’re getting out. And we will start to renegotiate and we’ll see if there’s a better deal. If we can, great. If we can’t, that’s fine,” said Mr Trump who has often maintained that climate change is a hoax.

But Mr Macron had a blunt response for Mr Trump’s suggestion.

“I tell you firmly tonight: We will not renegotiate a less ambitious accord. There is no way,” Mr Macron said.

Canada’s Prime Minister Trudeau said on Twitter that he was “deeply disappointed” with the decision.

Belgium’s Prime Minister Charles Michel called it “a brutal act”, while the leaders of Denmark, Finland, Iceland, Norway and Sweden said in a joint statement the accord was a commitment “to our children”.

“The effects are already visible in all parts of our planet. It is of crucial importance that all parties stick to the Paris Agreement,” they wrote.

Foreign leaders, business figures and even Mr Trump’s daughter, Ivanka, had lobbied for the US to stick to the accord, but ultimately lost to conservatives who claimed the plan was bad for the US.

Tesla boss Elon Musk tweeted: “Am departing presidential councils. Climate change is real. Leaving Paris is not good for America or the world”, while Disney chairman and chief executive Roger Iger also posted: “As a matter of principle, I’ve resigned from the President’s Council over the #ParisAgreement withdrawal.”

While Democrats were uniformly critical, Republicans came out largely in support of the move.

But at least two Florida Republicans were bold enough to express their disappointment with Mr Trump’s decision.

“Something’s not right when Potus is putting our country on a list with bad hombres Bashar al-Assad of Syria and Daniel Ortega of Nicaragua,” Congressman Carlos Curbelo wrote on Twitter.

And responding to Mr Trump’s assertion in his address that he “was elected to represent the citizens of Pittsburgh, not Paris”, the Mayor of Pittsburgh, Bill Peduto, was quick to fire back.

President Trump’s announcement will spark a lengthy withdrawal process that won’t conclude until November 2020 – the same month he’s up for re-election.